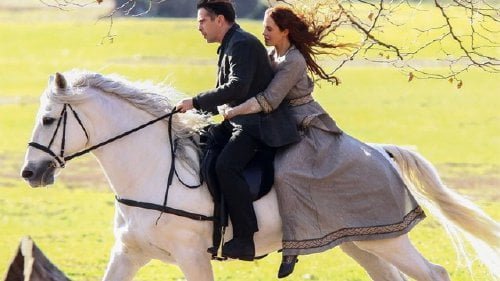 Irish immigrant Peter Lake (Colin Farrell) is a mechanic forced to become a thief. When his gang, led by obsessed demon Pearly Soames (Russell Crowe), is about to capture and kill him, he's saved by a flying white horse who becomes his guardian. But it is the love of Beverly Penn ('Downton Abbey's' Lady Sybil, Jessica Brown Findlay), a young woman dying of consumption in an estate he is trying to rob, who may unlock the human 'miracle' Soames is intent in stopping in "Winter's Tale."

Or something like that. Screenwriter Akiva Goldsman ("A Brilliant Mind") makes his directorial debut adapting Mark Helprin's 1980's novel and it is, in a word, ridiculous. This star spangled romantic fantasy is ill conceived, poorly directed dreck, with Farrell and Findlay's chemistry the one spark which shines through the murk. After some gobbledygook about how everyone is connected, we're dumped into the turn-of-the-century action with no idea why Soames and his henchmen are out to kill Lake (and we never really do get a valid explanation). Lake takes his savior horse to be stabled at his Grand Central Station hiding spot, then takes out a box holding a blanket and a brass plate engraved with 'City of Justice.' A flashback informs that Peter's parents were turned away at immigration due to his father's poor health and see them setting their baby afloat in a model ship (said 'City of Justice,' a bit of underutilized symbolism) which looks like it would be swamped well before reaching shore. Peter plans on stealing enough to get out of New York, but 'Horse' stubbornly stops outside of the Penn estate just as the entire family is leaving for its lake mansion (Beverly, who sleeps in a cabana on the roof to keep her body temperature down, explains to much younger sister Willa (Mckayla Twiggs) that she's following the next day as her tent must be set up, which only makes one wonder why a dying woman would be left alone without even any servants). Just as Peter's opened the family safe he hears Beverly playing piano, so of course after he explains he's robbing the house she invites him to tea. In her very sheer nightgown.) But Soames has 'divined' a red-haired woman from the blood of a waiter he's killed at the oyster bar and they immediately find Beverly as she departs the next day. Fortunately Peter and his flying horse intercede and Beverly's father Isaac (William Hurt) accepts the young thief when he expresses love for his daughter. Willa is convinced Peter can save her sister's life because she's made a princess's bed in the conservatory where he can kiss her, Sleeping Beauty style. But things don't go as planned and, after a visit to Lucifer (a hilariously miscast Will Smith), Soames gets permission to break some arbitrary rule and go after Peter. Lake is eventually badly beaten and thrown off the Brooklyn Bridge, but unbeknownst to Soames, emerges without his memory (Lake's ability to survive apparent drownings makes one begin to think he may be outed as Aquaman). Cut to 2014 where Peter spends his days making chalk drawings of Beverly before a little red-haired girl named Abby (Ripley Sobo) runs into him while out in the park with her mother (Jennifer Connelly). Taking on the directorial reins seems to have adversely affected Goldman's screenwriting abilities as the story, as told, never adds up (just why, for example, would Peter command his magical horse to leave him in dire straights when he just as easily could have escaped astride it?). Elements like stars and jewels, miracles and justice are introduced but left wall flowers. It's like "Gangs of New York" crossed with "Angels and Demons" and "Somewhere in Time." With a flying horse. Goldsman may get good performances from Farrell and Findlay, but Crowe has never been worse, Hurt seems addled and even special effects can't make Will Smith convincing. In his big climax, Goldsman sets a standoff in a horribly artificial frozen lake setting where Jennifer Connelly huddles off in a corner as if she nor anybody else knows what she should be doing. When unaccompanied by the score, dialogue often seems to exist in a vacuum with no mix of ambient sound. Character actors like Kevins Corrigan and Durand are wasted. "Winter's Tale" is such a debacle that one pities its cast, which includes Eva Marie Saint as the grown up Willa, having to promote it.