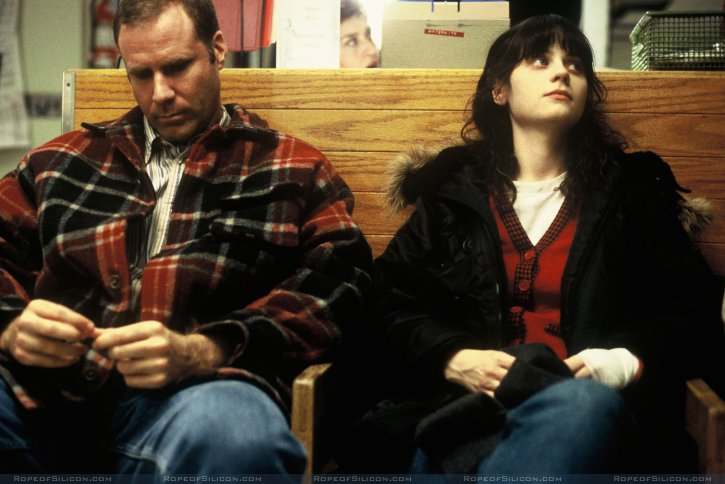 Struggling New York actress Reese Holden (Zooey Deschanel) is given an offer she can hardly refuse: book editor Lori Lansky (Amy Madigan) wants to give her $100000 for the letters between her Pulitzer Prize winning father, Don (Ed Harris), and her recently deceased, by suicide, mother. Unsure about what to do, Reese heads back home and find the letters before she makes a decision in “Winter Passing.”

When she arrives at her father’s house Reese is shocked when greeted by a stranger. Corbitt (Will Ferrell) is an aspiring rock wannabe who has taken up residence in the Holden home. Don, it seems, is more comfortable living in a shed out back. Reese gets a second shock when she meets Shelly (Amelia Warner), a former student of Don’s who also happens to live there. From here on in, “Winter Passing” is about Reese ending her self-imposed estrangement with her father, his regret that she didn’t attend her mother’s funeral, Don’s seriously self-abusive drinking, friendship, family, etc., etc., etc. The problem with “Winter Passing” is that you never get to like any of the characters. They are all so self-absorbed – Reese with her anger over being overlooked as a child by her intelligentsia parents; Don over the loss of his wife (something that he was responsible for over the years); Corbitt with his rock star aspirations but has trouble playing music and singing (like, who cares?); and, Shelly’s worship of Don – hers is the only selfless indulgence. Zooey Deschenal, who I have always liked for her dry, droll wit as an actor, is so morose as Reese that the character lacks any positive qualities. Ed Harris is just two-dimensional as the genius father who suffers from the demons of his past, loosing himself in the bottle. Aside from wanting to have a stiff one myself after seeing “Winter Passing,” I never gave a hoot about Don Holden. Will Ferrell is given a more dramatic role than we are used to but attempts to inject humor into Corbitt make the performance wishy-washy. Amelia Warner does have some screen appeal as the honest Shelly. Techs are fair at best. Maybe I was seeing a work print of the film since the color matching between scenes was noticeably uneven at times. The rest, from set design to costume, are pedestrian. First-time writer-director Adam Rapp creates a film that feels more like a school project than feature debut. It tries to draw the Hollywood film fans with its name talent but also tries to have its indie cake, too, with its austere human “drama.” It can’t have it both ways and “Ask the Dust” sure doesn’t get it.