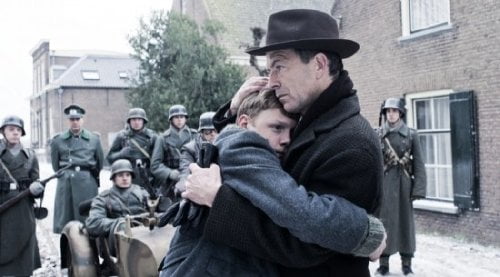 14-year old Michiel (Martijn Lakemeier) raptly watche out his window as Allied bombers stream overhead on their mission to bomb Hitler’s Germany. One of the bombers is hit by anti-aircraft fire and burns a fiery light in the night sky and crashes nearby. The pilot, though injured, bailed out and landed safely, only to be confronted by a German sentry. He kills the soldier. This act of survival will resonate with Michiel, his family and the occupied town in “Winter in Wartime.”

Dutch helmer Martin Koolhoven adapts, with co-scribes Mieke de Jong and Paul Jan Nelissen, the 1972 novel by Jan Terlouw in a coming off age, boy becomes a man story that deftly and accurately portrays the German occupation of a small Dutch town during the waning months of World War Two. The Allied armies have not reached Holland, yet, and the Germans still keep a tight hand on the Dutch and the resistance. Random arrests, execution of hostages and the hope, for the Dutch, that liberation is imminent are the daily existence for the people. For Michiel and his friend Theo (Jess van Driel) the war is just a backdrop for the adventures they have every day. They race to the crash sight on their bicycles and arrive just ahead of a German patrol. The two each swipe a souvenir from the crashed plane and ride off, but with the Germans in close pursuit. Michiel and Theo split up and Michiel thinks they got away when he falls off his bike at the feet of a Nazi officer. He is taken to area commandant but is set free when his father, Jacob (Raymond Thiry), the town mayor, intervenes. Michiel, though, sees his father’s cooperation as simply sucking up to the Germans. The aforementioned pilot, Jack (Jamie Campbell Bower), finally rears his head (25 minutes into the film) when Michiel gets involved. Michiel, against the warning by his resistance fighter uncle Ben (Yorick van Wageningen) to stay out of the war, wholeheartedly takes Jack’s freedom as his personal mission but his naïveté and the betrayal of the last person on earth may prove fatal, to more than one of those around the boy. Director Koolhaven does a marvelous job telling a multi-layered story that centers on Michiel and his adolescent encounters in war-weary Holland. “Winter in Wartime” goes far beyond, though. In Michiel’s eyes, his father is tantamount to a collaborator as he seems to toady up to the Germans. The boy does not realize that his dad is, in fact, a quiet hero who puts his own life on the line confronting the Germans when they attempt to arrest innocent civilians. Uncle Ben, too, is not what he seems and his actions will profoundly affect young Michiel. His sister, Erica (Melody Klaver), a nurse, also gets involved with Jack, making a love story within the drama. Behind-the-camera work is exemplary with its attention to period detail, such as the accuracy of the German uniforms and equipment. The epic story is given a coldly hued look making the Winter of the title a character in the story. The bleak, flat landscape of the Netherlands in winter adds to the palpable tension of a people who have struggled under the thumb of Nazi domination for over four years but feel like liberation is still far off. Acting is first-rate with Martijin Lakemeier giving a centered performance as a boy who years to be a man but is not ready for the cost of that maturity. Raymond Thiry gives a soulful performance a the mayor of an occupied town who must walk a tightrope, placating the Nazis in order to save as many of the townsfolk as he can. With the German threat of 100 Dutchmen to be execute for ever German soldier killed by the Resistance, Jacob has his work cut out for him. Yorick van Wageningen gives a layer performance as a man fighting for the Dutch freedom fighters but has a hidden and dark agenda. Melody Klaver, as Michiel’s sister and nurse, Erica, and James Campbell Bower, as injured pilot Jack, are thrown together and insert a love story within the high drama of “Winter in Wartime.” The coming of age story would appeal to like aged audiences – except, it is in Dutch, German and English, with subtitles, which makes “Winter in Wartime” one for the art house crowd only. This is too bad as the film has a much appeal for a broader spectrum of audience.