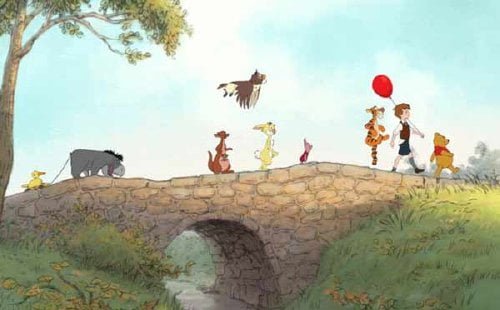 In the Hundred Acre Woods, there is a bear with a seriously grumbling tummy, a donkey who's lost his tail and a note from the missing Christopher Robin (Jack Boulter) which Owl (newcomer Craig Ferguson) tells his friends says that the boy has been kidnapped by the ferocious monster known as the Backson. By day's end, friendship will prevail and a day will be well filled with adventure for "Winnie the Pooh."

After a live action opening of Christopher Robin's bedroom, which establishes his childhood friends as stuffed animals as well as harkening back to TV's 'The Wonderful World of Disney' series, Writer (with 5 others!)/directors Stephen J. Anderson & Don Hall ("Meet the Robinsons") don't only bring us back into the beloved children's stories but into the actual A.A. Milne books. The device, which shows the characters moving about pages, climbing letters and (almost) jumping ahead (the audience can, if they read the words), is a terrific reimagining of the classic animations and a message about reading that has a funny parallel in Owl's unadmitted weakness in the area. The story has three main elements, all taking place on a single day punctuated continually by Pooh's lack of 'hunny.' In the first, the Hundred Acre Woods residents have a contest to replace Eeyore's tail, but of course each attempt - a cuckoo clock, a weather vane, a balloon - has its inevitable drawbacks. Once Christopher Robin's note is read (which, in reality, says gone for now, but back soon), Owl imagines the dreadful Backson of blue fur, sharp horns and red hair that smells like monkey feet and causes all sorts of calamaties. Tigger (voiced by Pooh vet Jim Cummings, who also supplies the bear's bass) sets out to hunt the beast down, and, finding a spring, decides to turn Eeyore into Tigger Two. Meanwhile Pooh and Piglet (Travis Oates) set up a 'picnic trap' and I'm sure you can see where this will all end. John Cleese supplies the narration and there are a bevy of songs, one surreally sung as the group is animated as if in crayon, another as Rabbit's (newcomer Tom Kenny) vegetable garden becomes a boxing ring. Pooh's behind is stuffed through the letter 'o' in honey and there is a honey mirage. The writers even come up with a Pooh version of the 'Who's on first' routine, an adorable, funny, punny homage. For all its delights, the new "Pooh," although charming, has a couple of drawbacks. The songs have been better in past installments (Carly Simon was a highlight for "The Piglet Movie" and "Pooh's Hephalump Movie" whereas Zooey Deschanel's contributions here are merely pleasant) and while some of the newcomers vocal work is just fine, Bud Luckey's interpretation of Eeyore sticks out like a sore thumb, lacking that woebegone quality that's made the donkey such a favorite (was Peter Cullen really that busy voicing Optimus Prime for Michael Bay that he couldn't return?). Still, "Winnie the Pooh's" new innovations are welcome and the film is charming from start to finish. B+ "Winnie the Pooh" is preceded by "The Ballad of Nessie," a simplistic, old-fashioned animated short with a modern story. Nessie and her rubber duckie MacQuack are driven from their pond by developer MacFroogle, who builds a golf course empire up around them. Nessie finally gives up trying to find a new pond and cries for weeks, creating the Loch where she will live happily ever after. The story is told in rhyme by Scotland's own Billy Connolly and visualized in a flat two-dimensional style that harkens back to the Silly Symphonies. B The DVD: The DVD is full screen (the theatrical release was a 1.85:1 aspect ratio), which isn't really a problem except for navigation, where the left arrow pointing back to the main menu might not be visible (I stopped and restarted the DVD while navigating through bonus features because of a lack of a 'Return to Main Menu' option, until, on the final feature, noticed the arrow which wasn't visible before). Otherwise, the film offers the choice of English, subtitled English, French or Spanish before going to the disk's main menu. There are the options for Play Movie, Scene Selection, Set Up (a repeat of language and subtitling options), Bonus Features and Sneak Peaks (Disney commercials). Like the film itself, the Bonus Features offer something for everyone. "Winnie the Pooh and His History Too" goes back to A. A. Milne and his inspiration, including b&w photos of the author, his son and his son's stuffed animals from the 1920's and works its way back up into the Disney fold and the present film, linked to the past by 'Pooh Guru' Burny Mathinson, who worked on the original shorts. Deleted scenes are a trove for students of animation and filmmaking - some are presented as b&w transparencies with vocal track, others are storyboards which have been animated and one is a completed animation. Singalong and Song Selection allows one to entertain the kiddies by jumping to the songs with or without song lyrics and a bouncing red balloon. Shorts offers the Nessie animation which played before the movie in theaters along with 'Pooh's Balloon.' A guide to planning a Pooh nursery with baby planners Ellie and Melissa is surprisingly free of the shilling of Disney merchandise, instead offering simple, sound advice. Don't bother clicking on the Info selection, unless you have a yen to read disclaimers. So, as with the movie itself, a couple of quibbles, but all in all, a delight.