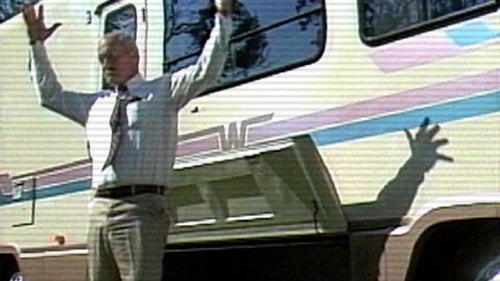 In 1988, Winnebago salesman Jack Rebney decided to make a TV commercial to help sell his RVs. But Jack was having a bad day during the shoot and flubbed take after take, cursing profanely throughout the videotaping. The editors took the foul mouthed footage and strung it all together and distributed the dubbed tape to friends and, eventually, to thousands. In 2005, the tape went onto the internet and the thousands of fans turned into millions for the “Winnebago Man.”

In 1989 a former broadcast journalist was hired to star in a promotional video for Winnebago. The guy was so frustrated by his own performance, he lashed out continuously with strings of artfully arranged expletives. His abused crew were so amused, they put together a blooper reel that went viral on dubs of dubs of dubs of a VHS tape. He was even quoted by Ben Affleck in 2004's "Surviving Christmas." Then youtube came along and he became even more famous. But when director Ben Steinbauer decided to try and locate the man, Jack Rebney didn't even know he'd become the "Winnebago Man." Steinbauer's quest ends up about more than finding Rebney, which he does. "Winnebago Man" is also an essay on the sea change the advent of youtube has made in our lives as the ultimate reality TV. And yet, Rebney's reaction to discovering his popularity and stardom is far from any expectation. For those unfamiliar with Rebney's famous rants, popularized before youtube in the traveling Found Footage Festival (cofounders Joe Pickett and Nick Prueher are interviewed here and are blessed with a public appearance by Rebney in San Francisco at doc's close), Steinbauer begins by showing the infamous footage and discussing its history and influence. Rebney's rants really are inspired. The man seems like he's on the verge of bursting out of his own skin and his setting, a wide bodied recreational vehicle, is an amusing irony. Crew members, including an 'I've got nothing to lose' intern, offer remembrances of the shoot. The Winnebago Man is also placed within a pantheon of youtube relevancy, with other video phenomenons, like Alexsey Vayner's leaked video resume 'Impossible Is Nothing' cited. Steinbauer tracks Rebney down to a small, remote cabin where he's been a camp caretaker for years and introduces him to his public persona. Given a chance to talk to the camera once again, this older Rebney is surprisingly eloquent. But he doesn't want to answer the questions Steinbauer puts to him. Instead he wants to deliver a message, to alert U.S. citizens to the evils of Dick Cheney among other things. His popularity is now his podium. His outlook changes a bit, however, when he meets his fans and discovers just what they love about the Winnebago Man. And the man who was determined to keep his private life private is revealed in some unexpected ways. "Winnebago Man" is a terrific character study. It also airs provocative meditations on the ramifications of living our lives via media. Steinbauer accomplishes both in this thoroughly entertaining feature debut.

The four-minute video of foul mouthed Rebney heaping verbal abuse on himself and the film crew pioneered the “viral video” genre. First time feature documentary filmmaker Ben Steinbauer pondered what happened to the most famous man no one knew and began his search for Jack Rebney. The journey begins with the infamous “Winnebago Man” video and the profane language would make Peter Capaldi’s character Malcolm Tucker (“In the Loop”) blush. The spinoff viral videos that followed are given play – there is even an Italian “Winnebago Man” video – as Steinbauer tracks down his reclusive subject. The director finds Jack Rebney living atop a mountain, oblivious to his internet fame. The interviews, initially, show Jack to be a changed man, soft spoken and nary a swear is to be heard. But the man is more complicated than that and the tyro director brings us up to date on the self proclaimed “Angriest Man Alive!” It is an interesting and entertaining look into the life of Jack Rebney – if you can take the language.