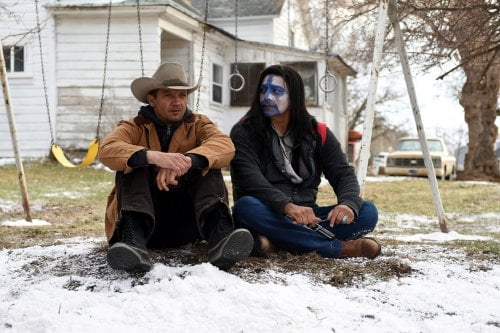 A young woman, barefoot, runs in terror across a frigid, sub-zero wilderness in the dead of night. A US Fish and Game agent, Cory Lambert (Jeremy Renner), tracking a puma and her cubs, comes upon the woman’s frozen body on an Indian reservation. The death brings in FBI Special Agent Jane Banner (Elizabeth Olsen) sent to investigate the Federal-jurisdiction crime. She enlists tracker Cory to help her find those responsible in “Wind River.”

On a moonlit night, a young woman runs, shrieking, through the snow, majestic, pine covered mountains impassively towering over the scene. The next day, U.S. Fish and Wildlife game tracker Cory Lambert (Jeremy Renner) shoots wolves threatening a flock of sheep before taking his son Casey (Teo Briones) to his grandparents' house. Cory's estranged wife Wilma (Julia Jones, The Twilight Saga) informs him something's killed one of her dad Dan Crowheart's (Apesanahkwat, "Bagdad Cafe") steers, but Cory will be on the hunt for a more dangerous predator when he finds Natalie's (Kelsey Asbile, "The Amazing Spider-Man") body on the reservation called "Wind River." Screenwriter Taylor Sheridan ("Sicario," "Hell or High Water") makes his directorial debut with the conclusion of his modern American frontier trilogy. "Wind River" is a solid mystery thriller layered with loss and the plight of the Native American Indian that features performances of deep inner sorrow from Renner and "Hell or High Water's" Gil Birmingham as the victim's father Martin. With the color white predominating, cinematographer Ben Richardson's ("Beasts of the Southern Wild") achievement cannot be overstated, his crisp imagery using the color to enclose, unite and separate. Nick Cave and Warren Ellis's ("Hell or High Water") score is mournfully lyrical. If the film has a failing, it is its derivativeness, references to "The Silence of the Lambs" beginning with Cory's entrance in that second scene, continued with the arrival of green F.B.I. agent Jane Banner (Elizabeth Olsen), a young woman seeking justice for another young woman in an unwelcoming environment. The Floridian who flew in from Vegas is derided for her unpreparedness for subzero temperatures by Tribal Police Chief Ben (Graham Greene, "Dances with Wolves"), then grudgingly outfitted in the dead girl's snow gear by her grieving grandmother (Tantoo Cardinal, "Dances with Wolves"). When Jane views the body Cory found tracking the mountain lions that killed Dan's steer, she doesn't know what to make of it, wondering how far anyone could have run barefoot in the snow. Cory's assessment is chilling, Natalie exhibiting signs of rape, her lungs exploded from the cold, and when he points out a trail leading up the mountain, Jane asks if he'll assist in her investigation. If Sheridan dips frequently into the "Lambs" well (a third act edit mirrors "Silence's" third act botched FBI raid to different effect), he makes up for it layering in character depth and racial tension. He also stages three explosive action scenes, the first when Jane, Ben and Cory attempt to question Natalie's drug addict brother Chip (Martin Sensmeier, "The Magnificent Seven") but are greeted by the strung out Sam Littlefeather (Tokala Clifford, "The Revenant"), the second when Jane and Ben's men arrive at the remote drilling rig where Natalie's boyfriend Matt (Jon Bernthal, "Baby Driver") worked, the third a flashback where we learn what happened to Natalie. Cory's character has been written and performed as an intriguing melding of hunter and parent. A visit from Jane elicits his own history, having lost his own daughter Emily - Natalie's best friend - in similar, unsolved circumstances. When Cory eventually finds that mountain lion and her cubs, he'll leave them undisturbed. His bagging of bigger game by his own code (craftily plotted by Sheridan to be untraceable) finds him at last in the full embrace of Wind River. Grade:

This is Oscar-nominated writer Taylor Sheridan’s “formal” directing debut – his first, “Vile (2011),” which he did not write, is a film I had not heard of before. His previous two scripts, for “Sicario (2014)” and “Hell or High Water (2016),” put him on the map in Hollywood, making his “debut” as helmer/scribe a given. “Wind River” is a solid mystery/thriller that benefits from its fine cast, a well-pace story with lots of action, standoffs and shootouts and, particularly, its starkly beautiful photography by Ben Richardson. Add to this that the woman, Natalie (Kelsey Asbille), is Native American and her body found on the Wind River Indian Reservation. This is not a job for the tribal police, led by Officer Ben (Graham Greene in a well-worn and comfortable role), and the Feds send in rookie agent Banner, a Fort Lauderdale native totally unprepared for the cold rigors of Wyoming and mistrust of the locals. This is a case where the story, the mystery about Natalie, is the glue that binds “Wind River” together. Jeremy Renner as a man of few words but wise in the ways of the wilderness and Olsen as the fish-out-of-water newbie agent lead the mostly-Native American cast as the story unfolds and questions are answered. There is violence, revenge and just desserts served (in a very satisfying way for the viewer). But, so is justice served and that is what “Wind River” is about.