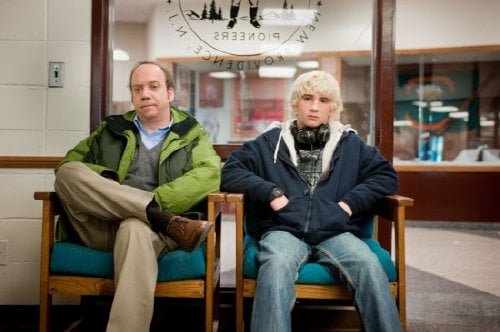 Small town New Jersey eldercare lawyer Mike Flaherty (Paul Giamatti, "Barney's Version") is hoping to keep his financial worries from his wife Jackie (Amy Ryan, "Gone Baby Gone," TV's 'The Office') to save her the stress, so when Leo Poplar (Burt Young, "Rocky") is upset by the idea of having to leave his home, Mike assumes his guardianship - and the $1,500 a month that comes with it. But Mike does not honor his promise and deposits Leo in Oak Knoll, the local assisted living facility. Who would ever think that the unexpected appearance of Leo's sixteen year-old runaway grandson Kyle Timmons (Alex Shaffer) would end up leading to a "Win Win?"

Writer/director Thomas McCarthy ("The Station Agent," "The Visitor") has built a terrific filmography using small, personal stories about people from very different backgrounds coming together to form reconfigured families with at least one member getting a second chance, a strong theme in his latest. "Win Win" is about a lawyer with a flagging practice who moonlights as the high school wrestling coach for a very losing team. McCarthy's put together one terrific ensemble, including former state wrestling champ Shaffer who's a charismatic natural in his acting debut. McCarthy knows it's all in the details and tells us a lot in his opening scene, where Mike and his practice partner Vigman (Jeffrey Tambor, "Hellboy," TV's 'Arrested Development'), also his assistant coach, confer over their building's failing boiler. Mike's secretary Shelly (Nina Arianda, another terrific casting choice) informs him that he only has two appointments that day and complains about how the boiler noise is impacting her hangover. At home, Jackie struggles with the couple's toddler and reminds Mike about expensive home projects (a much needed tree removal) and bills he can ill afford. Mike copes with his stress by running ('From what?' asks their preteen Abby (Clare Foley)) and by occasionally buying a pack of cigarettes, from which he extracts one to smoke, throwing the rest away in the dumpster behind the convenience store. It's no surprise Mike's best friend Terry Delfino (Bobby Cannavale, "The Station Agent," "The Other Guys") mistakes Mike's anxiety for a heart attack. Things ease up with Leo's guardianship and Mike can mail in his family's health insurance bill. But the arrival of bleach blonde, tattooed, cigarette smoking Kyle throws everything up in the air. Jackie's nervous about keeping the kid in her basement, but when she learns that Kyle's mom is in a drug rehab, her maternal instincts kick in. When it seems Kyle will be around for a while, he enrolls in the local school and Mike discovers he has a champion wrestler on his hands. Kyle even inspires Mike's weakest athlete, Stemler (David W. Thompson), to get in the ring using Kyle's 'whatever the f*!%$ it takes' moves. Then Kyle's mom Cindy (Melanie Lynskey, "Beautiful Creatures," TV's 'Two and a Half Men') appears on the scene and Mike's terrible secret comes out. McCarthy's films are character driven. He doesn't use showy cinematic flourishes, just straightforward filmmaking with production and art direction that inhabit real middle class neighborhoods in real, lived in homes, local courts, senior care facilities and school gymnasiums. All his major players go through a metamorphosis. Mike must face his moment of moral weakness in the eyes of those who looked up to him. Kyle leaves behind his delinquent past to embrace the decent young man that's always been there. Jackie overcomes her prejudices to find the diamond in the rough. McCarthy also achieves depth to his story by what he leaves out, such as the lack of envy or competitiveness between struggling Mike and his friend Terry, a wealthy day trader. Only Cindy remains underwritten - her motivation is clearly cash, but she never seems a typical hard case drug addict and the extreme hatred Kyle exhibits towards her is left unexplained. It is also hinted that the relationship between Cindy and her dad is less than great, but Leo naturally assumes a communion with his grandson. The cast is wonderful. Giamatti is such a schlubby Everyman with recognizable problems that we genuinely feel betrayed when he makes a bad decision. Ryan is warm and hilariously human as the lioness protecting her cubs, her youthful Jersey Jon Bon Jovi girl still informing the adult. Shaffer knows how to project a lot with very little fuss, dialogue or even facial expression - he's not quite sullen, but not exactly cheerful and we feel his comfort in his new situation. Burt Young charms as the gruff old man. McCarthy works tremendously well with his actors and his story feels so organic, its marvelous humor rooted in real life, that one can overlook the fact that "Win Win" is built on a pretty big coincidence. It's a feel good movie that earns its warmth without sentimentality or manipulation.