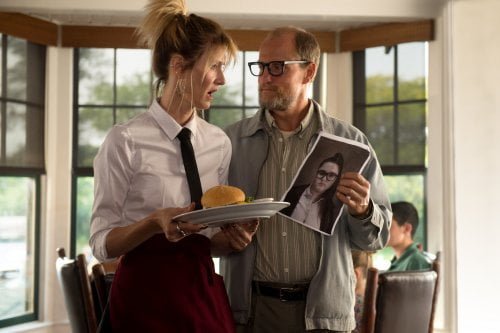 Continually striking out trying to make connections with strangers, a middle-aged oddball attracts the attention of Alta (Margo Martindale, TV's 'The Americans') after rear-ending another woman as an opening line in a pet shop parking lot. After telling her he believes the Internet has wiped out the art of conversation, Alta amazes him by finding the sister of his ex-wife in 5 seconds flat. Poppy (Cheryl Hines, TV's 'Son of Zorn') has nothing good to say, but gives him a lead and when he finally finds Pippi (Laura Dern) after 17 years of no contact, he learns she never did have that abortion, instead having put their daughter up for adoption. Misfit teen Claire Cassidy (Isabella Amara, "The Boss") gives a new lease on life to her birth father, "Wilson."

With a screenplay adapted from his own graphic novel by "Ghost World's" Daniel Clowes being directed by "The Skeleton Twins's" Craig Johnson, one goes into "Wilson" expecting offbeat hilarity, but while there are certainly many funny moments to be had with Wilson's warring contradictions, Johnson's tone lacks teeth. Woody Harrelson, too, never feels quite right, no matter his ability to encompass misanthropy, extroversion, optimism, loneliness and longing all in the same package. This is a gentle, meandering character study that goes everywhere and nowhere at once. Wilson, who declares himself a 'people person' and decries a lack of community turns off the first person we see him run into by replying to her enthusiasm over his wire-haired terrier, Pepper, by responding in the voice he's crafted that's supposed to be his dog. He lives in a cramped apartment loaded with books over a karate studio which is best described as brown. When he gets news that his father is dying, he leaves Pepper with his sitter Shelly (Judy Greer) and takes a train to the deathbed. During the journey, he sits next to his car's only passenger (one of his repeating quirks), awakening him from sleep and jabbering his ear off. He begs his conscious dad for a sign of love only to watch him take his last breath. After Poppy informs him her sister turned into a crack whore with intermittent waitressing jobs, Wilson begins searching for his ex on the streets, receiving a blow job but no information. Showing her picture at local restaurants finally uncovers a harried, middle-aged rocker chick none too pleased with his description of her. Pippi gets dragged into his surveillance of their daughter (found via a P.I. doing a Google search), but when Wilson sees the overweight teen being bullied by classmates in a mall, he breaks cover. Suddenly two women at loose ends find themselves in a reconstituted family with one odd patriarch. Claire keeps her wealthy adoptive parents in the dark, but enjoys outings with her birth parents, including a trip to age inappropriate Fairy Land. Then Wilson makes a huge tactical error, firing up Pippi to put Poppy in her place with a family visit. Things turn out OK for Wilson in the end, even after a stint in prison, but not the way he or we expect and not in a particularly satisfying way. This is a sunny film about people you probably wouldn't want to hang out with. Wilson can be endearing, as we see in heartfelt conversation on a walk with Claire and his obvious adoration of Pepper, but we never really learn how he got this way. Wilson himself points to DNA in a 'nature vs. nurture' debate, noting his and Pippi's mannerisms in Claire (who wears almost identical black framed eyeglasses as her dad), but his relationship with his own dad doesn't bear this out. Dern's repelled attraction to her ex gives us something to hang onto, but Clowes throws it away. Hines is hissable in her judgmental perfection, Amara likable and sympathetic, but it's the smaller performances that stick, like Lauren Weedman's ("The Five-Year Engagement") curmudgeonly turn as the pet store lady. "Wilson" charts one man's search for connection, but his disconnects are a lot more entertaining. Grade: