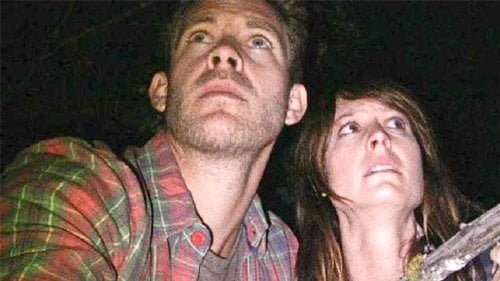 When her boyfriend, Jim (Bryce Johnson, "Sleeping Dogs Lie"), hands her a microphone so he can do sound checks while she's busy driving twisty mountain roads, Kelly (Alexie Gilmore, "World's Greatest Dad," "God Bless America") states 'This is not safe,' even as she goes along with him. Jim's celebrating his birthday by realizing a life long dream to travel to the Patterson-Gimlin film site where they captured less than a minute of what they claim is Bigfoot in 1967. Kelly's safety concerns ramp up after local advice both pro and con about camping out in the wilderness of "Willow Creek."

One might have expected that writer/director Bobcat Goldthwait's ("World's Greatest Dad," "God Bless America") found footage Bigfoot movie would be a parody of the genre, but no, he plays it straight and it's a clever mixture of character derived humor (Jim is a believer, Kelly a skeptic) and real tension. Comparisons to "The Blair Witch Project," whose characters also got lost in the woods while searching for a legend, are inevitable and rather than distancing himself from that film, Goldthwait embraces it, especially in its concluding moments. The first half of the film lets us get to know Jim and Kelly, whose playful banter is quite funny (for a sound check, Kelly intones the lines from a Summer's Eve douche commercial she auditioned for, winning praise and astonishment from Jim that she didn't get the gig). If there's a fault in the opening narrative, it is that the couple appear to be comparing notes on the Bigfoot phenomenon for the first time during this trip. They stop at significant spots to do a little shooting - a signpost, a Bigfoot Burger restaurant (featuring Bigfoot footprint buns), a mural, statue and the Willow Creek information center, whose real life employee Nita Rowley is decidedly not caught up in the area's most mysterious tourist attraction. Bigfoot Books owner Steven Streufert acts as the expert and Tom Yamarone sings his own ballad 'Roger and Bob' for the camera. A witness, Ranger Troy Andrews, seems to withhold when Kelly runs tape, but warns 'lots of pets and people go missing around here,' a sober commentary given that Jim and Kelly had riffed on the missing bulletin of a woman hanging in the restaurant. One local acts aggressively, warning them not to enter the woods, adding fears that local rednecks or pot growers may pose more danger than the Sasquatch, but another assures them that as long as they take reasonable caution things should be fine. '...and I have no cell phone reception, the beginning of every horror movie,' Kelly notes as they drive along a dirt road where they meet another local intent on having them turn back. Jim knows another route, however, and soon they're hiking in towards the filming site. As night is approaching, they pitch their tent and head off towards a creek. Upon returning, they find Jim's sock high up in a tree and their tent toppled. Just who or what is playing with them? As the night wears on, they'll become more and more convinced it isn't human. Goldthwait's made a film that's half kitschy American road trip, half straight chiller and his two leads ably switch tone, just as Goldthwait's film seems to be warning that we should beware the embrace of cultish legends as entertainment. Jim's gung-ho adventurer doesn't give enough heed to Kelly's fears and Kelly puts too much faith in his preparedness (no compass?). The director's done a believable job with the genre, only leaving us to wonder who found the footage. He excels using sound to suggest what we cannot see. "Willow Creek" is a solid little horror movie. The Blu-ray: The disk features the usual upcoming promos before an easy to navigate menu appears. The best of the extras is the commentary track with Bobcat and his two stars recalling the pains and pleasures of their five day shoot at the actual locations the film is referencing. Treacherous cliffside roads, humble accommodations (including the tent featured in the film) and a case of scabies were just a few of the hardships the small cast and crew endured. But this trio clearly enjoys each other and fun is more in evidence than fault as they share a number of humorous anecdotes, like how after an arduous six mile journey in a four wheel drive Jeep, cast member Bucky Sinister pulled up in a Smart Car and how one featured player earned the moniker 'cinnamon tits.' We learn that Goldthwait's original intention was to make a Christopher Guest style mockumentary of a Bigfoot Convention, but that he changed his mind when he came to location scout and met the people he'd be including in his film - he himself is a believer and he didn't want to mock others of his persuasion. It's especially touching to hear Bobcat entreat his listeners to tell him if they've listened to this audio track, as the rise of streaming services like Netflix means fewer and fewer do. There is one deleted scene featuring Bigfoot hunter Cliff Barackman that doesn't add much as he talks about the 122 sequential footprints he found at a different site. Strangely, during the commentary everyone discusses their regret at the loss of one of Gilmore's scenes in which she says goodbye in a direct address to the camera. It was considered too close to a similar "Blair Witch" scene, but here was the perfect opportunity to present it. Her costar Johnson made the 'making of' sequence which documents the filmmakers making Bigfoot prints on a creek bank, discovering just how difficult it is to fake. Grade: