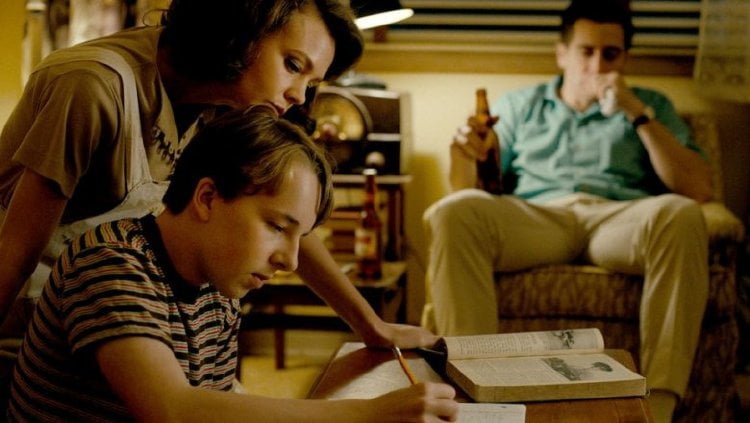 Newly settled in a small Montana town, affable Jerry Brinson (Jake Gyllenhaal) is fired from his job at the local country club for overstepping his bounds with customers. At first his wife Jeanette (Carey Mulligan) is optimistically supportive, but when Jerry declines his former boss's offer of having his job back to instead go fight the wild fires threatening the town, her attitude changes abruptly. Their fourteen year-old son Joe (Ed Oxenbould, "The Visit," "Better Watch Out") observes his parents' behavior with mounting horror, shame and helplessness in "Wildlife."

Cowriter (with partner Zoe Kazan, "Ruby Sparks")/director Paul Dano makes his filmmaking debut adapting Richard Ford's 1962 set novel. Its color palette, compositions, retro production design and even David Lang's ("Youth") horn-based score suggest Todd Haynes directing a film inspired by an Edward Hopper painting. But the film has a serious flaw in that abrupt change in Mulligan's character. Sure we can intellectually analyze what brings on this change, but Mulligan hasn't shaded the initial part of her performance with anything that would suggest it, instead her sweetly supportive, conventional housewife turning desperate, scheming maneater on a dime. When we first meet Jerry, he's cleaning off golf shoes still on the feet of the men who've just played the game, chatting happily with them, the offense which seems to set his boss off. In conversation with his son while groundskeeping, we can deduce Jerry initially dreamed of being a pro player. His firing takes place off camera as we see Joe taking in the scene, snatches of the conversation and Joe's expression telling us everything. Although we witness scenes without him, the story is clearly told from Joe's point of view. Jeanette goes into town to secure a job herself and ends up lucking into a position teaching swimming where she meets car dealership owner Warren Miller (Bill Camp). We learn more about Jeanette's mindset in conversations with her son, unusually frank for the time. She talks about having dressed up and posed at rodeos, hoping to get the attention of a cowboy. Now her more seductive clothing is coming out, which Joe notices when he comes home to find his mother entertaining Warren who purportedly dropped by to borrow a book of poetry. Later, Joe cringes when his mother accepts a dinner invitation from Warren and is openly disdainful of her husband and too forward in her interest in Miller's money. It's too bad about that seismic shift in Mulligan's performance because she is fascinating to watch once she sheds her surface image for the real Jeanette lurking beneath. The story itself is a little suspect, Jeanette treating Joe more like a confidante than her son, stretching credulity (how many women, even today, would say to their fourteen year-old boy 'We haven't been intimate lately, you're old enough to hear that.'?). Oxenbould is very good as the frightened kid, already burdened with trying to fit into a new high school (his budding relationship with Ruth-Ann (Zoe Margaret Colletti) should have either been built up or excised, here nothing but extraneous background). We can read the hurt and confusion on his face, yet while he promotes his father, he never denigrates his mother. Gyllenhaal is that recognizable persona, the lovable loser. Camp's Miller is a decent enough guy who's been around the block a time or two. He enjoys a moment of honesty with Joe that sums up his character, relating a transcendent experience where he forgot everything earthbound. That wildfire, which Jeanette and Joe drive to at one point, is an obvious bit of symbolism for what's going on within the Brinsons' marriage in addition to foreshadowing a climactic event. Dano and his cinematographer Diego García ("Cemetery of Splendor") again let us see Joe's reaction to it well before exposing it to us. The camera is often static (there are a couple of well placed tracking crane shots), scenes meticulously composed and lit. Meticulous is the word to describe Dano's direction, too, the fledgling filmmaker drawn to this story which spoke to his own experience. In the press notes, he says he found how he wanted to end his film first and that that was what inspired him to move forward. Oddly, the film's ending is its most artificial aspect. Early in the film, Jeanette tells Joe that it's a good thing to know your parents were people before they became your parents. "Wildlife" suggests that is the path to disillusionment. Grade:

Jeannette and Jerry Brinson (Carey Mulligan and Jake Gyllenhaal) and their son Joe (Ed Oxenbould) move, for the umpteenth time, to a new town, but Jerry soon loses his golf pro job, for fraternizing with club members. When offered his job back, his ego is too big and he refuses. This puts the Brinson family into its worst crisis, just one of many, in “Wildlife.” Paul Dano makes his directing debut and co-writes the screenplay with Zoe Kazan with a story of a family in crisis, circa 1960. Jerry has had a long history of losing jobs and running away from responsibility, always thinking he deserves a better life but “they” always keep him down. Jeannette has long put up with his unreliability for himself or to his family. His temper and easily-bruised ego do not help. Jerry cannot find a job suitable to his pride and, out of desperation, takes a low paying, dollar an hour job fighting a forest fire raging nearby. His absence turns Jeannette away from her husband and she gets a job teaching swimming at the local Y and meets a well-to-do older businessman, Warren Miller (Bill Camp). Joe is the unwilling observer of his mom’s flirtations and embarrassing behavior as he watches the rift between his parents grow. There is something about “Wildlife,” to me, that does not feel, well, I am not sure what. The performances are fine and the story is full of metaphor and angst, but there is a lack of individual artistic style behind the camera. The film is technically solid but there is a dearth of creative, individual spark that should ignite in me. I felt like I was watching a film about a play about a family and never got closer than arm’s length.