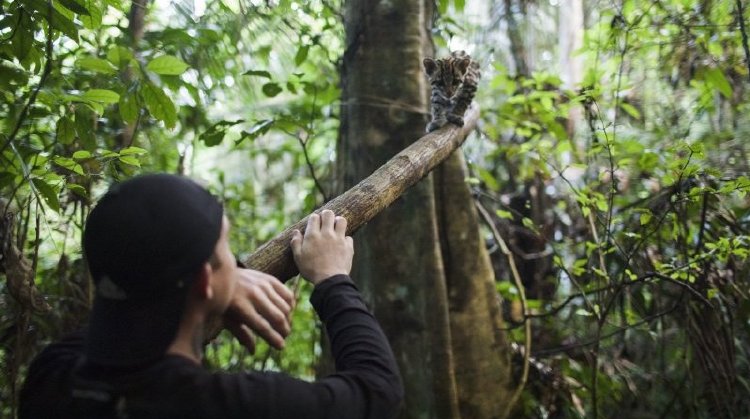 Harry Turner enlisted in the British Army at the age of eighteen, but after witnessing the killing of innocents, particularly a 4 year-old girl, he was given a medical discharge for PTSD.  Continuing to suffer from depression and a sense that life was not worth living, he left England after an unsuccessful suicide attempt to lose himself in the jungles of Peru.  His fate took a turn for the better after a serendipitous meeting with PhD candidate Samantha Zwicker.  She recognized him as a natural candidate for surviving hard living while he found purpose as the two embarked on something never done before – the rewilding of a baby “Wildcat.”

While this tale of rearing two ocelot kittens so that they can survive on their own in their natural habitat features many adorable moments, parents should be warned that this is no DisneyNature film.  Melissa Lesh and Trevor Beck Frost’s documentary is as much about mental illness as it is about wildlife and its main protagonist has a particular fondness for a certain four-letter word.  The baby ocelot is also frequently shown being taught how to hunt and kill other animals.

That said, this is an often moving document about the healing effects of nature for one man and the tremendous effort of one young woman who founded Hoja Nueva to protect a significant area of the Peruvian Amazon.  Five miles from any town, the two live on a wooden platform with no running water, Internet or other amenities.  Khan, their first baby ocelot, is rescued from an illegal logging operation which was readying him for the black market.  Turner, who shot fully one third of the footage we see in “Wildcat” (the directors were not allowed to interact with the wildlife), becomes Kahn’s ‘mother,’ teaching him how to do such things as climb within an enclosed jungle habitat, then later pointing out such protein as bugs, reptiles, and rodents for Kahn to catch and kill.  (It should be noted that Turner is also very open with his video diary about his own mental health struggles.)

The plan is to spend eighteen months with the cat, Harry its only human interaction, before releasing it into the wild, but on one of Harry’s walks with the cat outside of its enclosure at night, a run-in with a hunter’s trap ends in tragedy.  Harry’s mental health takes a serious beating, Sam, who has also become Harry’s romantic partner, noting how closed off he has become.

One year later, hope arrives in the form of Keanu, the couple’s second rescued baby ocelot. Harry and Sam move into a more remote area for safety and while Keanu also has some close shaves interacting in the wild, he survives.  Harry’s parents and thirteen year younger little brother travel in for a successful family holiday.  Sam must leave frequently for trips to the States to complete her thesis and while she is away, Keanu spends his first night alone in the jungle.  Harry is proud as punch while also saddened by the oncoming separation, but when Keanu keeps returning to their camp, the cat’s seeming dependency on is human ‘parent’ sends Harry into a suicidal spiral.  A concerned Sam cannot convince him to go home for treatment.

It is around this point in the film that we hear Sam’s account of life growing up with an alcoholic father, a man she saw as two separate individuals even as a small child.  While he was playful and caring while sober, he grew abusive after what she says averaged 27 shots of liquor a night.  Sam speculates that this experience is also what drew her into nature, but it is disturbing to hear her compare her unwillingness to give up on her dad to Harry’s condition (‘men that are bad for me’), even as we recognize her impossible situation.

But while the two end up going their separate ways, the filmmakers leave us with hope.  There was little doubt Sam would be successful and Hoja Nueva has expanded in scope and staffing, thirteen wildcats having gone through the rewilding program developed there.  Meanwhile Harry, after spending 8 months in England, is now volunteering with a different wildlife program in Ecuador.  “Wildlife” is a complex account of people struggling to find their way while helping disadvantaged creatures make their own way back into the natural world.

Suffering from depression and PTSD from his tour of combat duty in Afghanistan, British Army veteran Harry Turner has decided to end the life he has known. He journeys to the Peruvian Amazon to do the deed but changes his darker plan when he meets Samantha Zwicker, a scientist and conservationist dedicate to saving orphaned wildlife in “Wildcat.”

While I enjoy documentaries about redemption and salvation, there is something not quite genuine in “Wildcat” that bothered me. As I watched, I felt like I seeing a film that was scripted and staged and not the organic presentation it appears to be. This kept me at arm’s length with the humans involved in the film.

The two orphaned ocelots that Harry and Samantha save and train to go into the wild are Khan and Keanu. Khan, very near ready for release into the Peruvian rainforest, is lost to a hunter’s booby trap gun. That loss is devastating to the emotionally fragile Harry and he is shaken to his core, Then, baby Keanu comes into their lives and Harry, and to a lesser degree Samantha, are put back on the road to emotional recovery – he from PTSD and she from life with an alcoholic father.

What works best in this wildlife doc is watching the training regimen the cats need to survive when released into the wild – how to hunt and, more importantly, how to kill - must be taught. Harry, a reluctant warrior, takes on the task and, in the process, heals, too. That is what needs to be taken from this story of salvation on several level