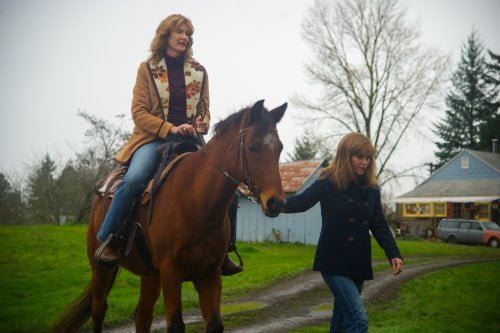 After the death of her beloved mother Bobbi (Laura Dern), Cheryl Strayed (Reese Witherspoon) descended into a black hole of drugs and sex that destroyed her marriage and all but obliterated her own self image. Determined to find her way back to the woman her mom believed her to be, Cheryl embarked on a solo hike of over 1,000 miles on the Pacific Crest Trail to find a different kind of "Wild."

Working from screenwriter Nick Hornby's ("High Fidelity," "An Education") backwards structured adaptation of Strayed's memoir, director Jean-Marc Vallée takes a leap forward from his Oscar nominated "Dallas Buyers Club." With an impressive physical and emotional performance from producer Witherspoon and a heart breaking yet joyous turn from Dern, "Wild" is not only a self-reflective adventure tale but a deeply moving mother/daughter story. We first meet Cheryl at a low point on her trek, her feet so wrecked by ill fitting boots she's losing nails. Rewinding to the start of her journey, she calls her ex-husband Paul (Thomas Sadoski, "John Wick," HBO's 'The Newsroom') from a motel room. Her backpack is so overladen, she collapses face down trying to put it on (and Witherspoon carried 60 lbs. around through much of the film's shooting). Hitchhiking a lift, she sets out across the Mojave Desert, contemplating quitting only minutes along her way. When she pitches her tent for the evening, she discovers she's bought the wrong kind of fuel for her portable stove. This quandary, which forces her to eat cold gruel for days on end, leads Cheryl to her first encounter with another person. When she begs a man on a tractor for a ride to someplace she can get a hot meal, Frank (W. Earl Brown, "Draft Day") tells her he's working, then suggests she wait in his truck. She finds a gun. When he climbs in, he asks what kind of woman she is. But the encounter goes very differently than Cheryl expects and people will continue to surprise her along her journey. As Cheryl will surprise us. Initially we don't know why she's doing this, why she's divorced from a man she so clearly still loves. We get hints through the literary and song lyric quotes she leaves at Trail registers, attributing her name along with the author's. Flashbacks, beautifully edited as snippets of jogged memory, begin to reveal her past. 'I'm the girl who says yes. I'm an experimentalist.' she tells her concerned best friend Aimee (Gaby Hoffmann, "Crystal Fairy & the Magical Cactus") back home at a cafe in snowy Minneapolis. But the tawdry, shadowy snippets give way to memories of her mother, a woman who left an abusive husband with two small children to envelop them with love and cheer despite their poverty. When Cheryl leaves a quote from James Mitchner, it's moving because we've seen the hurt her disdain for Bobbi's favorite author caused, a relatable moment. Vallée has crafted a film rich in details which support its many themes. The film offers the stunning backdrop of the ever changing Pacific Crest Trail. A horse and a fox take on deep significance. "Wild" is an ode to self discovery, an expression of grief, a beautiful, moving film. Grade: