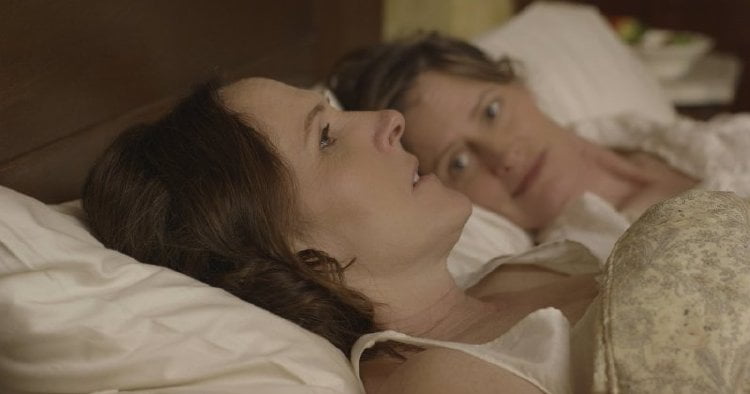 History has regarded The Belle of Amherst as a spinster and a recluse, writing most of her poetry for an inner circle. Using Dickinson’s private letters, which not only counter that story, but shed new light on her poetry, writer/director Madeleine Olnek presents a feminist, LGBTQ revisionist look at the literary icon while also having a bit of fun in “Wild Nights with Emily.”

‘Too much had been made of late of Emily Dickinson’s girlhood friendship with the wife of her brother, Susan.’ So begins Mabel Loomis Todd’s (Amy Seimetz) self-serving talk to the women of the local Shakespeare Society, told as we watch Emily Dickinson’s (Dana Melanie as teen, Molly Shannon as adult) formal kissed reception of her sister-in-law (Sasha Frolova as teen, Susan Ziegler as adult) turn into a passionate embrace that lands them both behind a couch. Mabel was responsible for editing Emily’s works after her death, but she possibly also edited Dickinson’s letters - spectrographic technology revealed that Susan’s name had been erased from them. As the film progresses, we also learn that Mabel was responsible for creating false mythology about the poetess in her own book ‘Scurrilous But True’ possibly to cover up her own affair with Dickinson’s brother and Susan’s husband Austin Dickinson (Kevin Seal). In 1914 Susan’s eldest daughter Mattie, who had couriered letters between her mother and her beloved aunt, tried to set the record straight about the nature of their relationship, but her account never gained traction. And so “Wild Nights with Emily” is at once a sexy, comedic romp revealing far more lived passion and duplicity in the 19th century adjoining households of Amherst (Susan and Austin lived next door to the Dickinson homestead) than previously imagined and a fresh look at Emily’s work and her struggles to get them published. Olnek conjectures that while Susan loved Emily’s poems, she was aghast that her lover used her name. Yet those like Atlantic Monthly publisher and ‘mentor’ Thomas Wentworth Higginson (Brett Gelman) were oblivious, even Susan missing the connotation of ‘I taste a liquor never brewed.’ Higginson may have published eleven of Emily’s poems during her lifetime (she wrote almost 2,000), but he continually discouraged her as ‘not ready,’ even as he promoted the trite rhymes of Helen Hunt Jackson (Cynthia Kaplan). Emily more than likely also took Kate Scott Turner (Allison Lane) as a lover after a spat with Susan, sparking jealousy between the two. An older friend of her father’s, Judge Otis Lord, was also a suitor (hilariously portrayed by Al Sutton as barely able to stay awake and confusing the works of Emily and Charlotte Brontë as ‘Wuthering Jane’). The film often plays like a slamming door farce, Emily and Susan utilizing a pantry passage with two exits for their trysts, Emily repeatedly trying to leave her bedroom, only to return at the sounds of Mabel and Austin’s lovemaking. Even Ralph Waldo Emerson (Robert McCaskill) does not escape comedic scrutiny here, a roomful of admirers straining to comprehend his inaudible mutterings. Olnek has found many inventive ways to incorporate Emily’s words, ‘Because I Could Not Stop for Death’ here influenced by the beats of ‘The Yellow Rose of Texas,’ a split screen recitation of ‘I Died for Beauty’ by Emily (Shannon) and a black Civil War soldier incredibly moving. The filmmaker has so many ideas and so many ways of conveying them, that her film never completely gels, but “Wild Nights with Emily” gives us a lot to think about in a humorous and entertaining way. Grade: