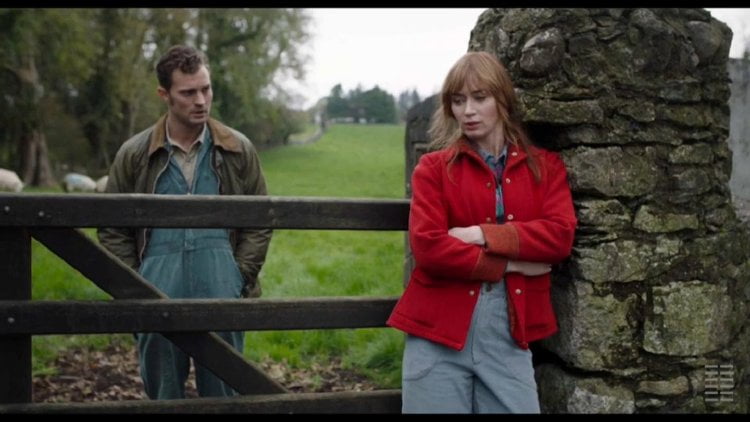 Frustrated by his son Anthony’s (Jamie Dornan) seeming eternal bachelorhood, Tony Reilly (Christopher Walken) tells him that instead of inheriting the farm he works, he intends to sell it to his American nephew Adam (Jon Hamm).  On the neighboring Muldoon farm, Rosemary (Emily Blunt), who has pined for Anthony since childhood, is devastated, but when Adam arrives and takes notice of the fiery Irishwoman, things get complicated in “Wild Mountain Thyme.”

Writer/director John Patrick Shanley ("Doubt"), perhaps best known for writing “Moonstruck,” adapts his play 'Outside Mullingar' for the screen with mixed results.  For a romantic comedy to work, there has to be at least one obstacle the couple must overcome.  Here there are two and neither makes a lick of sense.  Still the film features beautiful scenery and a perfectly cast Blunt not only does the titular folk song proud, but gives us someone to root for amidst this overly busy and somewhat weird tale.

The film begins in childhood where Rosemary’s late dad was known for his obsession with shooting crows and where the young girl was put out with Anthony’s preference for Fiona (Anna Weekes).  Years later, Rosemary lives with her widowed mother Aiofe (Dearbhla Molloy, the lone stage veteran) and rides a wild black horse that is always getting loose.  She’s also been deeded a strip of land by her dad which cuts across the entrance to the Reilly farm, requiring them to open and close two gates, an annoyance Tony wishes to rectify by repurchasing what he sold years ago to buy his wife a gold ring.

It’s hard to understand just what Anthony’s problem is (when he tells Rosemary during the film’s climax you may just slap yourself upside the head) or even why Rosemary’s ardor persists, but when he discovers he may lose the family farm he practices proposing to a donkey, a sight that keeps local wag Cleary (Barry McGovern) in Guinness (and stitches), then trots over to the Muldoons' with his mother’s wedding ring – and promptly loses it.

Shanley takes so many weird detours, like Anthony’s encounter with a woman in a pub that goes nowhere, or Tony’s derogatory remarks about his son’s favoring the Kelly side of the family only to later admit that it took years of marriage and multiple children before he realized he loved his wife, that it’s difficult to pin down just what the filmmaker’s after.  Animals are featured prominently, from Rosemary’s wild horse, to the Reilly’s comical dog and the swans of ‘Swan Lake,’ yet they have no real connection to the story.  There is a musical quality to the language even when the dialogue is strange, though, and Blunt, in particular, makes it sing.

“Wild Mountain Thyme” has some parallels to the John Ford classic “The Quiet Man” with its much locally debated marriage and an American looking to buy into his birthright, but with the exception of the strong female determining its outcome, it’s better to stick with the old ways.

Ever since they were kids, Rosemarie Muldoon (Emily Blunt) has always known that neighbor boy Anthony Riley (Jamie Dornan) was meant for her, but the shy boy was forever clueless of her attention. Now, all grown up, she has about given up on Tony and her life plan in “”Wild Mountain Thyme.”

The title comes from a traditional Celtic song and fits this little romance set in County Mayo in Ireland, giving the story a slight mystical glint. But, at its heart, the tale is about unrequited love.

Scripter turned director Sean Patrick Hanley, with his roots in romantic comedy with “Moonstruck (1987),” attempts to catch lightning again with a new romantic comedy. The result is mixed, with Emily Blunt a now-angry young woman who feels she has waited too long for Tony – she even declares, at one point, that she had her eggs frozen in anticipation.

Anthony, though, seems a bit dim and, when his dad, Tony Sr. (Christopher Walken), tells his family that their land is to be sold to Anthony’s more ambitious American cousin, Adam (Jon Hamm), barely reacts. This inertia drives Rosemarie both away and a bit crazy as she must cope with an uncertain future.

My advice to Rosemarie is find a Plan B, get rid of Tony and live happily ever after.