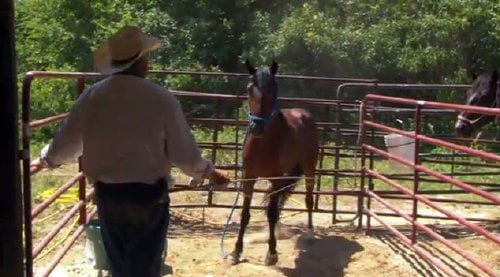 Every year, thousands of wild horses are rounded up by the US Government and corralled for auction. One organization, Extreme Mustang Makeover, selects 100 people to train 100 of these beautiful creatures for three months to be ready for public auction instead of being a “Wild Horse, Wild Ride.”

One of the most romantic symbols of the American West, the wild Mustang, is herded up by the thousands and put into federal holding pens every year. In an effort to make sure some of these horses are adopted into good homes, the Extreme Mustang Makeover Challenge was created for 100 trainers to take 100 horses and transform them within 100 days. Professionals and amateurs from across the country have many different reasons for wanting to take a "Wild Horse, Wild Ride." If 2011's "Buck" was the study of one extraordinary horse whisperer, "Wild Horse, Wild Ride" proves that the talent is more widespread, albeit not an inherent one. Husband and wife Greg Gricus and Alex Dawson make their theatrical debut following nine of the competitors in a half dozen states, some motivated by the good of the horse, others by more personal interests, as they train with animals every bit as different as themselves. We first meet another husband and wife time, George and Evelyn Gregory of Texas, two of the older trainers who are seemingly allotted each other's horses. George wanted big and gets one of the smallest in Waylon, but while Evelyn is paired with the larger Willie, Waylon turns out to be the bigger challenge. From Wisconsin, Jesus Jauregul is a trainer from Mexico who bonds with his horse Compadre so completely, he hopes to buy him (the trainers must bid along with the general public at the auction which follows the competition). Single mom Wylene Wilson from Arizona is a real showboating show person seemingly without fear, up on her horse Rembrandt by Day Two while Native American Indian Charles Chee still hasn't mounted Comanche with only 10 days remaining (his son Carlos also competes). With a PhD in biomedical engineering, Melissa Kanzelberger has never failed at anything she's set out to do, but her two sisters wonder who will be hurt first - her or her horse Zero. Lastly, Nik and Kris Kokal of NH cannot even conceive of being able to keep their horses, but that doesn't stop Kris from achieving a level of trust so great his bond might never break. The filmmakers don't go too much into the competition's background, instead jumping right in and introducing their competitors. They continue to check in over the three months and we see vast differences in progressions, some frankly jaw-dropping. All end up in Fort Worth, where the two day competition is chronicled, followed by the auction and some credit roll follow ups. The film runs a little long, the filmmakers lose most of those they've followed after Day One's competition and how I wish they'd addressed just why anyone would bid against these selfless trainers for their horses, but these animals are beautiful and Dawson and Gricus make a great case for what can be accomplished with a lot of love and patience.

Tyro documentary filmmakers Alex Dawson and Greg Gricus create a unique film about a cross section of the unusual characters who accept the challenge to take a wild-for-all-its-life horse and have it ready for adoption in a mere 90 days. The film focuses on just a few of the contestants of the mustang makeover and the horses they are given (contestants are assigned a horse to train). By limiting the focus of “Wild Horse. Wild Ride: to just a few of the colorful characters who take on such a daunting task makes for a tight, evenly woven and entertaining story of the 90 day life between man and beast. The trials and tribulations of training a wild horse are evenly weighed among the contestants followed for the months of the makeover. Large cowboy George is teamed with diminutive horse Wayland and it is a battle of wills that make the prospects of success doubtful. Wylene is an extremely confident woman who transforms her ward, Rembrandt, into THE show horse of the competition. Brother Kris and Nick perform miracles and are able to, during the final two day test, put their horse through its paces – blindfolded. They, and the rest of the horse and man or woman teams, show amazing patience (yes, the horses have to be patient with their humans, too) and resolve as the trainers complete their daunting task. This is a terrific companion piece to the riveting 2011 documentary “Buck,” about Buck Brannaman, the man who inspired “The Horse Whisperer.” With “Wild Horse, Wild Ride” we see the dare to any takers to the task of making a horse that has never felt the touch of a human hand into a well-trained, well-behaved equine. These everyday horse whisperers, and their noble steeds, are an inspiration to all. Even if you do not love horse, this is an eye-opener on human and animal nature that will entertain all.