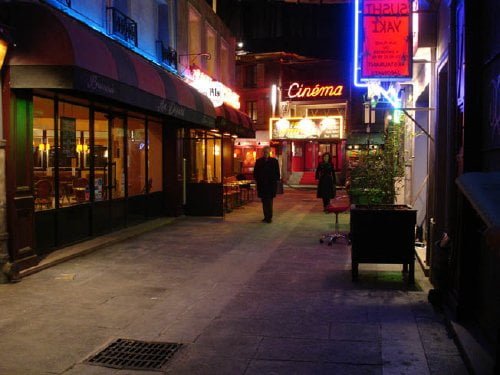 When senior househusband Georges Palet (André Dussollier, "Private Fears in Public Places," "Micmacs") finds a red wallet, he becomes obsessed with its owner whose picture he believes resembles a legendary aviatrix from years gone by. His attempts to make contact with Marguerite Muir (Sabine Azéma, "Private Fears in Public Places"), a dentist who happens to fly planes as a hobby, always end up in the air, like the seeds sown by "Wild Grass."

Legendary director Alain Resnais ("Hiroshima mon Amour," "Private Fears in Public Places"), whose last film concerned interconnected lonely hearts in snowy Paris, has made another reverie on love, this time using vibrant color patterns and cinematic references as touchstones. But while this whimsical film does not seem like the work of a man nearing ninety, it also lacks focus. Or at least Resnais isn't making it easy to be let in on his joke. For example, in the opening segment, we learn that Muir has feet so special, she must buy special shoes. She has a favorite clerk at Marc Jacobs with the patience of a saint. She buys one pair, red (red and yellow are Maguerite's colors where blue and green are paired with Georges), only to be forced to return them five minutes later when a skateboarder snags her yellow handbag. Never again are Marguerite's feet mentioned. Then there is Georges' mysterious past - it is implied that perhaps he is a criminal of some sort, afraid of police recognition. But maybe he's just an imaginative writer. Or casting himself in a film that is playing only in his mind. Who knows? It is also disturbing how casually he disregards his wife, Suzanne (Anne Consigny, "A Christmas Tale") to stalk the flighty Marguerite. Yet, when his wife asks him to do a household chore (mow the lawn, paint the eaves), he's right there for her. Oddly, he always gets to complain about the aches and pains these chores leave him with to the police. Even more bizarre, though, is how Georges throws over Marguerite for a quick tumble with her colleague Josepha (Emmanuelle Devos, "A Christmas Tale") in the back of a car, only to try and rewoo her when she invites him - and Suzanne - to go flying. The distraction of a broken pant zipper will lead to tragedy and Resnais skips over to another group of people entirely where a little girl imagines what might happen if she turns into a cat! Imagine is the operative word here. So for all the beautiful, color-coded and saturated imagery (cinematography by Eric Gautier ("Into the Wild," "A Christmas Tale") is lovely) and all the funky little movie tricks (the 20th Century Fox fanfare, 'Fin!,' Edouard Baer's conspiratorial narration), "Wild Grass" isn't a very fulfilling film. Still, André Dussollier, resembling a French Paul Newman, gives a compelling performance even though his motivations are puzzling and Mathieu Amalric ("Quantum of Solace") does an amusingly bug-eyed turn as the policeman who brokers the return of the wallet and deals with its aftermath. A scene of adoring airmen serenading Muir as they deliver breakfast to her in the cockpit of a Spitfire is also a gem. Too bad nothing really ever adds up.