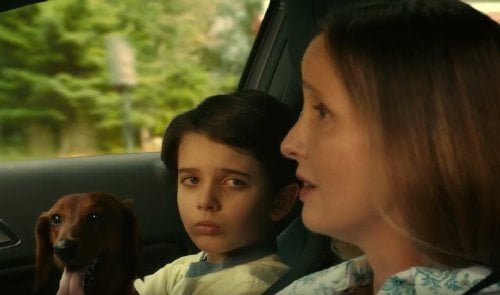 It is a mystery why Danny (Tracy Letts, "Elvis & Nixon") gets a dog for his young son Remi (Keaton Nigel Cooke), a recent cancer survivor, as he and his wife Dina (Julie Delpy, "Before Midnight") have no compassion for the animal. A bout with diarrhea seals its fate, but vet assistant Dawn Wiener (Greta Gerwig, "Maggie's Plan") saves it from euthanasia. Several others will own the dachshund Remi named "Wiener-Dog."

Writer/director Todd Solondz ("Happiness," "Life During Wartime") makes insightful movies about innocents suffering the worst human impulses from a viewpoint that suggests arrested adolescence mixed with intellectual black humor and a critical eye towards America. In an economical 86 minutes, Solondz begins with overlapping stories, switches to an 'Intermission' which is actually a Western-themed 'Wiener-Dog' music video, a device used to switch to two vignettes unconnected from the first half's characters. Be forewarned, animal lovers, as Wiener-Dog herself suffers a hideous fate, but Solondz mines it for dark laughs, softening the blow with artificiality and a gag that runs on just long enough. (He's described his own film as "Au Hasard Balthazar" meets "Benji," and damn if that isn't pretty accurate.) Dina reacts churlishly to the news of a new dog, wondering just who will care for it. Danny announces he will walk it, but he does so begrudgingly. Remi's horrible parents give him the worst kind of life lessons in discussing the sweet pup, Fascist-leaning teachings about submission to superior will, rape, sterilization and cremation. Remi and Wiener-Dog, who's kept crated in the garage, enjoy one morning of bliss when left alone, but a treat offered the dog upsets its digestive system (and cinematographer Ed Lachman ("Far From Heaven," "Carol") treats us to a tracking shot that could be an outtake from "Pink Flamingos"). Dawn names her rescue Doody, then sets off to buy food where she runs into her former bully/crush Brandon (Kieran Culkin, "Igby Goes Down") (the roles were originally played by Heather Matarazzo and Brendan Sexton III in "Welcome to the Dollhouse"). Their conversation is cringingly awkward, but when Brandon asks if she'd like to accompany him on a trip to Ohio, they take off and a surprising side of Brandon is revealed in his affection for his Down Syndrome-afflicted brother Tommy (Connor Long) and his wife April (Bridget Brown, "LOL"). Brandon, who once thought of raping Dawn, recognizes innocence when he sees it, gently trying to dissuade his brother from reveling in a violently misogynist video game. Dawn leaves the dog, who has something horrifying in common with the couple, with Brandon's brother and sister-in-law. After the amusing break, we pick up with screenwriting professor Dave Schmerz (Danny DeVito), the dog's latest owner. Schmerz, who can't get his agent on the phone and whose 'What if? Then what?' teaching mantra is mocked by students, is the personification of unfulfilled dreams. His students are either pretentious or clueless, one unable to name a single movie title. The dog's last owner is Nana (Ellen Burstyn), a bitter old woman whose granddaughter Zoe (Zosia Mamet, HBO's 'Girls') has arrived for the first time in years to beg money to fund her unfaithful boyfriend Fantasy's (Michael James Shaw, TV's 'Limitless') dubious art project. Once Zoe leaves with her check, Nana falls asleep where her younger self (Melo Ludwig) shows her all the potential she wasted. Awakening from her nightmare, Nana is subjected to a new one. Solondz's 'six months later' double-edged sword of a coda couldn't be more perfect. Solondz's America is one of depressing landscapes full of featureless buildings and corporate chains. But there are glimmers of hope for his sad losers. Remi may have a real battle on his hands making it into adulthood with his decency intact, but he'll always remember "Wiener-Dog." Grade: