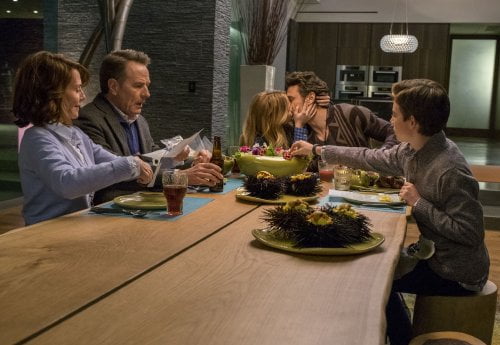 On his 55th birthday, Ned Fleming (Bryan Cranston) and his guests are shocked when his daughter Stephanie's (Zoey Deutch, "Dirty Grandpa," "Everybody Wants Some!!") big screen Skype call into his party reveals a guy in the background taking off his pants. He'll get an even bigger shock when the whole family travels to California to spend Christmas with her and discover they'll be staying with that guy, her fantastically wealthy, totally unfiltered boyfriend Laird Mayhew (James Franco) in "Why Him?"

Cowriter (with Ian Helfer)/director John Hamburg ("I Love You, Man") dusts off his old "Meet the Parents" script and flips it around with story input from Jonah Hill. This time, it's the potential son-in-law who exhibits most of the cray cray and the results are pretty much what you'd expect. The cast elevates this pre-packaged entertainment though, so if you're in the mood for some R-rated holiday-themed family comedy, "Why Him?" should fit the bill. Ned has always been close to his daughter, so the ground begins to shift beneath his feet when he learns she's been keeping a secret. Laird, who on the surface couldn't be more different from Ned, isn't at all the guy he'd expect his daughter to gravitate towards. Ned runs a family printing business while Laird, who owns a video game company, runs a 'paper free' house (something that causes much embarrassment when Ned confronts Laird's Japanese toilet). Ned is generally warm with a good sense of humor, but Laird is one of those guys whose immediate intimacy is unsettling and whose vocabulary is rich in four-letter words. And for every bit of information Stephanie tries to soft pedal, Laird blurts out the truth, including specific reasons for his attraction to Ned's daughter. Laird welcomes the Flemings with his upper body exposed (he tends towards dropped crotch pants and espadrilles), showcasing his many tattoos, the newest of which is the Fleming family Christmas card photo on his back. His ultra modern home is surrounded by land where exotic animals roam. Estate manager Gustav (Keegan-Michael Key) is on constant call when he isn't being Cato to Laird's Clouseau. The entire house is outfitted with a Siri-like presence named Justine (voiced by 'The Big Bang Theory's' Kaley Cuoco) who finds Ned rude. Hip food is served by celebrity chef Richard Blais. The home's decor features lots of paintings of humping animals and a moose suspended in a urine-filled tank. Of course, Stephanie's mom Barb (Megan Mullally) takes to all this with a lot more enthusiasm that her husband, especially when Laird's outrageous holiday gathering includes vaping weed. Fifteen year-old brother Scotty (Griffin Gluck, "Just Go With It") gets an education as well, much of it highly inappropriate, but some of it encouraging his ideas for a 'seat at the table' of Fleming Printing. But just when Ned begins to bond with Laird over a jointly stolen Christmas tree, two developments regarding his daughter's future and a big secret he's been keeping cause an abrupt rift. The big finale, which features Gene Simmons and Peter Criss in full KISS regalia, is a solid sendoff with faint flavorings of "It's a Wonderful Life." This is a perfect role for Franco, whose seedy charms are well utilized here, a mixture of sincerity, over familiarity and vaguely off-putting sexuality (a scene where he drapes himself across the Flemings' bed post-shower, his man caftan riding up his thighs, is squirmy fun). Cranston imbues his outraged dad with the anxieties of a stranger in a strange land, the looser Mullally a great foil. Deutch is saddled with the straight woman role, but she makes her conflict cop likable. Hamburg never bothers to offer any real substance for Laird's success nor any obstacles to Stephanie's hold on him, but movies like this aren't made for deep thought. It may disposable entertainment, but "Why Him?" sports a talented cast and enough outrageous flourishes for a few good laughs. Grade: