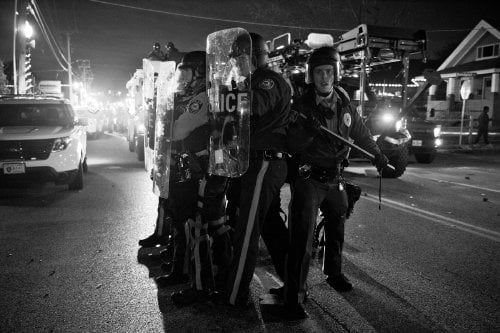 When the unarmed Michael Brown was shot by Ferguson police, his body left lying in the street for hours, area residents angered by law enforcement's long standing racial prejudice rose up in peaceful protest, holding a candlelight vigil. 300 police in riot gear corralled them into a local store's parking lot. The building was burned. As militarized police and National Guard action escalated, enflaming the situation, documentarians Sabaah Folayan and Damon Davis speak to the activists demanding "Whose Streets?"

Folayan and Davis give us a very good idea of what it was like being on the streets of Ferguson during those months after Brown's murder and a Grand Jury's failure to indict Darren Wilson, but their portrayal of various activists is uneven, a scattershot approach which robs their material of some of its power. They also provide no input from anyone in law enforcement. Although it didn't specifically focus on the racial aspect of police militarization, last year's "Do Not Resist" was a lot more hard hitting. Still, the Black Lives Matter movement needs all the attention, and, for those who don't get it, explanation, it can get. Of the five people profiled during the course of the film, only two really stand out. Brittany Ferrell is the single mother of Kenna and a nursing student who cofounded Millennial Activists United (MAU) with Alexis Templeton, who she will marry during the course of the film. Her 'welcome' mat advises 'Come back with a warrant.' When she leads a group stopping traffic, she's arrested, facing charges from a white woman who attempted to drive through the protest claiming she was terrified she'd be dragged from her car and beaten. We've seen the incident and there is nothing to suggest this, yet the controversial ploy itself is uncommented upon. (Ferrell's comment about 'the white man's defense' comes ringing back when Wilson, in an interview, describes Brown as a demon.) David Whitt lives in the Canfield Green apartments and witnessed the aftermath of Brown's shooting from his window. The husband and father of four is a member of Copwatch, taking his camera everywhere. When the memorial to Brown is found ablaze, he's on the scene, noting that although the fire appeared to have been started with an accelerant, neither the police nor fire department investigated. When the memorial is back in place, a government van arrives to remove it against residents' wishes. Whitt also shows the filmmakers the various ammunition he's gathered off the streets - huge rubber bullets, tear gas cannisters and another type of insidious gas which burns upon contact with water. At the end of the film we learn Whitt has been evicted with no reason given. The filmmakers pick up many powerful moments out on the street, such as the woman who politely asks a police officer barricading a street if she can cross to get to her car, right across from where she is standing. She's told to head five blocks away, towards the rioting to cross over. This is serving and protecting? We see countless protesters with their hands in the air shouting 'Hands up. Don't shoot.' We learn how the Ferguson PD raises millions targeting blacks for traffic violations that land many in debtor's prison. We see Ferguson's police chief questioned as to why he released convenience store video of Brown when it was unrelated to the incident in which he was killed. Whitt's noted that the Canfield Green security cameras, which surely captured the shooting, were all taken down after Brown was killed. Attorney General Eric Holder's report finding the Ferguson police department guilty of racial bias led to a reform agreement, but has anything changed in Ferguson? The filmmakers don't go here either (and the NAACP just issued a travel warning for the state of Missouri!), but "Whose Streets?" is yet another reminder that overzealous policing and restricting peoples' rights will lead to violence. Grade: