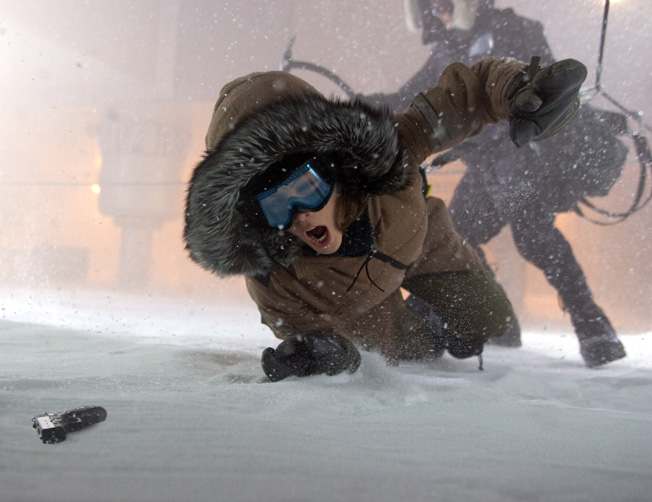 Winter is fast approaching the American research station at the South Pole and the crew is preparing to vacate the premises. When one of the pilots reports a body lying on the ice just three week before the evacuation, it is up to US Marshal Carrie Stetko to investigate. Things are not good, and about to get worse, when she realizes that the dead victim is the first, ever, homicide in Antarctica in “Whiteout.”

U.S. Marshall Carrie Stetko (Kate Beckinsale, "Nothing But the Truth," the "Underworld" series) and her best bud on Antarctica's Amundsen-Scott Base Dr. John Fury (Tom Skerritt, "Alien," TV's "Picket Fences") are both looking forward to leaving the continent for good when researchers at a smaller, remote base start getting murdered. Duty calls and they remain when the base is evacuated just before a "Whiteout." Brought to us from director Dominic Sena ("Swordfish"), who occasionally makes a move in between Janet Jackson videos, with a script from two brothers with one credited screenplay back in 1998 and the team of twins that brought us the Hilary Swank bomb "The Reaping," "Whiteout" only offers a few distractions amidst a dramatic pile of cliches and an obvious red herring. It is a mystery why star Beckinsale, who has proved her acting chops in a scattering of indies, keeps wallowing in junk food genre fare. The film opens with the back story to the murderer's motivation. It's the Cold War era, and a bunch of Russians on a cargo plane become involved in a major shootout when the copilot tries to divest himself of his passengers. The plane crashes and none survive. Jump to the current day and we follow the confident walk of a parka clad female as she approaches a base in a long tracking shot that reveals a bunch of newbies streaking past her outside to a bunch of tropics-themed revelry inside right into Stetko's room for an inverse demonstration on how to layer clothing and a hot shower! But before her hair's even dry, Carrie gets pilot Delfy (Columbus Short, "This Christmas," "Quarantine') to take her out to investigate a spotter's ID of a possible body out on the ice. They find a geologist, Weiss, dead with a nasty leg wound and half his head blown off. This sight jolts Stetko into a continuing series of flashbacks to the case in Miami that dashed her confidence, gave her trust issues and drove her to a distant climate. When Carrie gets back to base, the doc offers to ship the body to McMurdo and spare them both an investigation, but, her adrenaline pumping, she reports the murder to base commander Sam (Shawn Doyle, HBO's "Big Love"). Then one of Weiss's colleagues, Mooney (stunt man Steve Lucescu) contacts her, telling her she and she alone must come to Vostok, a remote Russian base, where he tells her she will discover everything she needs. But she gets there just in time to witness his dying gurgles and be attacked by an axe wielding, mask wearing psycho. When she comes to, she is greeted by U.N. rep Robert Pryce (Gabriel Macht, "Because I Said So," "The Spirit"), who conveniently responded to Sam's call to the F.B.I. lickity split. Is Pryce, who early on speaks so stiffly it sounds like he may be trying to cover up an accent, who he says he is? And so "Whiteout" plods along pretty much as expected. The rickety screenplay trots out such inevitabilities as the lecture to the new recruits, the better to get in some exposition about survival conditions in Antarctica; the law officer who gets one last case just before turning in the badge; the suspect who inexplicably escapes the minute backs are turned, the so-unlikely-he-must-be-the-bad-guy bad guy, and, of course, the climactic approaching killer storm. The filmmakers do excel at making one feel the frigid wind, enough to make us wince when the heroine must handle an exterior metal hatch, leaving much skin behind. In fact, many of the film's gory moments are bred from its storms, a nice touch. Other than that, though, there is one interesting escape involving a buried plane's roof hatch and a three-way fight scene where all combatants are tethered during one of the titular whiteouts. The cast is as good as can be expected in this type of genre hash. Beckinsale is particularly committed, although even she can't save the climactic reveal that ends with an over the top action that's not quite funny enough to be 'so bad it's good.' The best that can be said about "Whiteout" is that it's a might more entertaining than watching snow on your television.

The best that I can say about “Whiteout” is that there is a lot of action and much of it well done. But, action alone does not make a movie good and there is little more than that going on here. Winter is descending on the South Pole and those getting out better do so soon. However, the eagle eye of one of the camp’s pilots force Carrie to investigate. When she brings in the body of a geologist (who never happened to be reported missing for some reason) killed in a fall, she discovers that it is murder. Further investigation brings another body and a faceless, axe-wielding killer bent on removing Carrie from her life. Enter handsome, suave UN cop Robert Pierce (Gabriel Macht), who just happened to be hanging around the South Pole, a kindly station doctor, Doc (Tom Skerritt), and a few other suspicions characters and the result is a watch-my-watch thriller that only intermittently thrills. There are some cool moments, like when Carrie and her cohorts are trapped in a buried-in-the-ice cargo plane and must blast their way out. But, most is just predictable routine.