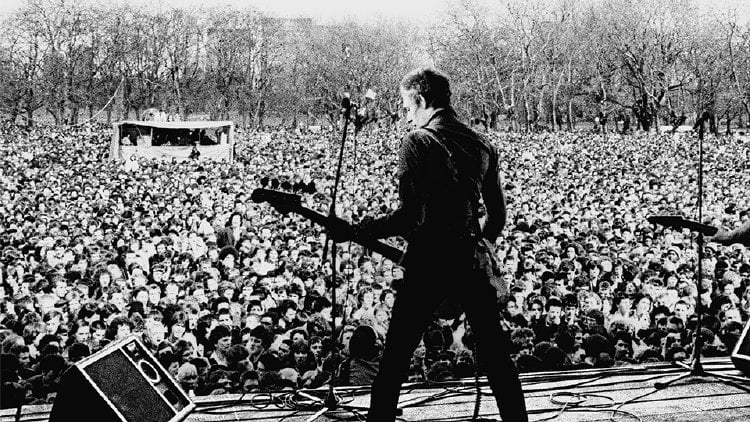 As punk was exploding in late 70’s Britain, so was a disturbing trend toward fascism represented by the right wing National Front movement and anti-immigrant politicians Enoch Powell and neo-Nazi Martin Webster.  Rock photographer Red Saunders was so incensed over a racist speech given by Eric Clapton, he wrote a letter to the music press that rock should stand against racism and the music press (NME, Melody Maker, etc.) published it.  Encouraged, Saunders and a like minded group began the Temporary Hoarding fanzine and began organizing events, the greatest of which was the Rock Against Racism concert where The Clash played their empathetic anthem “White Riot.”

Cowriter (with Ed Gibbs)/director Rubika Shah (both of doc shorts "Let's Dance: David Bowie Down Under" and "White Riot: London") responds to the current disturbing atmosphere of right wing extremism by looking back just over forty years ago when the National Front was everywhere and British police harassed and terrorized immigrants with the ‘suspected persons’ law.  The resulting film, with its spritely pace, joyous spirit, fanzine aesthetic and punk rock soundtrack, is a hopeful testament to what can be achieved by ordinary citizenry.

Shah’s meticulously assembled documentary uses an extensive present day interview with Saunders as her through line, cutting to stills, archival and never-before-seen footage to flesh out his tale.  Most innovatively, she animates pages from his fanzine.  Saunders is a great story teller, his wit somehow making his observation that he wasn’t just against the National Front but ‘your everyday British family kind of racism’ almost funny.  We get plenty of examples that are not, however, including racially motivated murders on Brick Lane and beatings of West Indian Blacks.

Shah notes that there was a point where punk began to flirt with ‘fascist chic’ as we see Sid Vicious in his swastika tee, Siouxsie Sioux wearing a swastika armband and David Bowie in full Thin White Duke (and cocaine) mode calling Hitler the first rock star (his notorious Nazi salute being a wave caught by a photographer at just the wrong moment).   While most of these musicians rejected racism (we hear Johnny Rotten going full rant), other more mainstream rockers like Rod Stewart supported Powell (ironically from his home in L.A.).  Fortunately, the punk movement embraced anti-racism, people like Saunders pushing for Black bands to be booked with white ones.  The West Indian Notting Hill Carnival, back before the area got toney, is enjoyed by all.

There’s a brief interlude outlining the roots of racism in British Colonialism before Temporary Hoarding’s Kate Webb tells us about all the letters they were fielding, including kids writing to them about fascist teachers.  When the NF decided to march through the racially mixed Lewisham, it was the first time since WWII that police broke out riot shields.  But make no mistake, they supported the NF (two recent fictional films are set against this background – this year’s “Beats” and last year’s “Blinded by the Light”).

The film’s climax is the Rock Against Racism event, one which Saunders wanted to bring into the NF territory of Victoria Park via a march from Trafalgar Square.  They engaged Sham ’69, a band with followers on both sides, to appeal to better angels despite the potential risk.  The Clash were asked, and agreed, to cede headliner status to Tom Robinson, who was thought to be the best to bring everyone together.  Steel Pulse is heard throughout the march.  Alien Kulture, a band comprised of Asian immigrants and one ‘token white,’ participated as did Poly Styrene.  The gig which Saunders estimated as drawing 500 when he applied for his permit drew 80,000.

“White Riot” is a snapshot of history as it reverberates today, made with great skill and buoyant punk pride.  It’s one of 2020’s most entertaining – and enlightening – documentaries.

In the 1970s, the punk movement, with its fascist fashion and nationalist/racist/anti-immigration thinking, was making its way into the modern music scene. But, a more thoughtful movement was growing within that scene – Rock Against Racism – to fight back against the growing hate for outsiders coming to Britain in “White Riot.”

When I heard about the subject matter of Rubika Shah’s insightful and amazingly current documentary about a music revolution against racism, in the ‘SEVENTIES no less, I was dumbfounded. Granted, the movement, Rock Against Racism, was tiny when compared to the 70s music scene, but the dedication of its founders made RAR a force to be reckoned with.

Shah tells us of the inspiration that brought about RAR – rock guitarist Eric Clapton, in 1976, cast his support for racist MP Enoch Powell and the National Front – as the tiny movement attracted punk bands like The Clash and Steel Pulse plus reggae bands, too. They united in their anti-racist cause and pushed their fight to where it counts most – through music. This culminated in a concert in London’s Victoria Park that attracted 80000 music lovers joining the fight. (The promoters had a permit for 500 attendees.)

The RAR movement, we learn, was founded by Red Saunders, Roger Huddle and other dedicated activists who, with Clapton’s declaration supporting Powell to stop Britain from becoming “a black colony, started a paper, Temporary Hoarding (note the “rar”) to spread the truth and counter against racial hatred toward the immigrant population. (Unfortunately, this hatred still exists in the US.)

It is hopeful to note that, while Powell was voted out in 1979 and the National Front fell soon after, the RAR flourished into the 1980s in Britain. I think we need the RAR folks and their philosophy here, in the US, and now.

"White Riot" is playing virtually at The Brattle theater beginning on 10/16/2020.