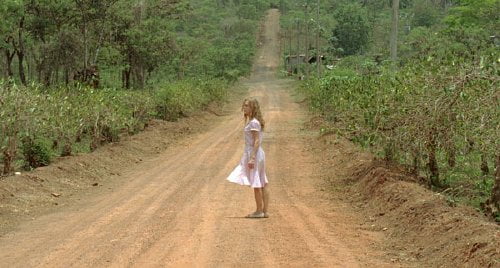 As the French Army pulls out of an unnamed African country in the midst of a revolution, rather than leave Maria Vial (Isabelle Huppert, "I Heart Huckabees," "Home") tries to keep her workers on her coffee plantation for the harvest. When they leave, she ignores increasingly dangerous signs, including the fact that the natives are now referring to the colonists as "White Material." Cowriter (with Marie N'Diaye)/director Claire Denis ("Beau travail," "35 Shots of Rum") returns to the autobiographical subject of her first film, "Chocolat," French colonial Africa. Back in 1988, Isaach De Bankolé ("The Limits of Control") was the proud houseboy Denis's stand-in remembered from her childhood. Now he's The Boxer, a rebel leader being hunted down who has taken refuge on Maria's property with a gunshot wound, an apt analogy for the difference in tone between the two films. "White Material" is about a seemingly delusional yet determined woman facing down chaos and terror whose own family disintegrates along with its host country. The film begins with Maria on a dusty road trying to beg a ride. A bus driver turns her away, but a rooftop passenger helps her board with exterior footing. Her ex-husband André (Christophe Lambert, the "Highlander" series) is useless and her son Manuel (Nicolas Duvauchelle, "Trouble Every Day," "Wild Grass") lives the life of the privileged, sleeping all hours. When Manuel takes a swim, André sees two young boys approach with machete and spear. Still Maria stays, but Manuel joins those who threatened him. Working for the first time in a long time without her usual cinematographer Agnès Godard, Denis's film achieves a restless, primal tension aided by Yves Cape's ("L'humanité") restless camera. The film keeps us on edge from its first frames. As murder and pillage approach from the outside, Maria finds her own heart of darkness. "White Material" is a jagged film that leaves one too many gaps for its audience to fill in. It works more as a tone poem that a straight narrative. But Denis makes her intent clear at film's close by dedicating it 'For all the young rebels...and for Maria.'

Claire Denis is an eclectic filmmaker who has produced a masterpiece, “Beau Travail,” and an utter failure, “Trouble Every Day.” Starring Isabelle Huppert as Maria Val, a white matriarch trying to gather her endangered coffee crop during a violent political upheaval in some unnamed African country, “White Material” fall somewhere in between. Isabelle Huppert gives a stern, one-note performance as a woman trying to make it in the male-dominated, black African world. You root for her in her David versus Goliath battle to save her livelihood, her coffee plantation, but you never empathize with the woman. Denis shows well the arid lands where Maria tries to protect her home and harvest her crop amidst a civil war, but the story never involved me to the degree that it should. The scenario, by director Denis and Marie N’Diaye, is packed with plot lines, beginning with the end of the film when the body of The Boxer (Isaach De Bankole) is found by soldiers. Flash back to Maria as she is desperately trying to get back to her plantation but hindered by the growing political tensions in the nameless African country. She is estranged from her husband, Andre (Christopher Lambert), who actually owns the plantation. Her ne’re-do-well, lay about son, Manuel (Nicolas Duvauchelle) offers no help to his mother. Her coffee harvesters are frightened by the elevating violence and abandon her, leaving Maria to fend for herself bringing in the coffee harvest. There is a lot going on here and Huppert is always interesting to watch. However, “White Material” is bloodless at its core and garners little more than superficial empathy for Maria’s plight.