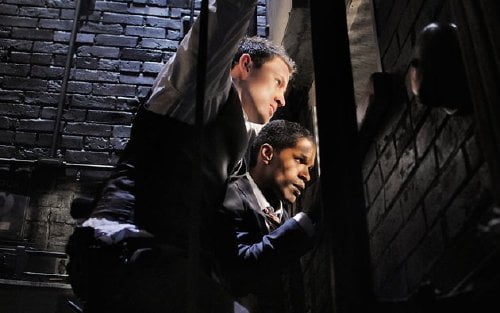 Capitol Police Officer John Cale (Channing Tatum) picks up his daughter Emily (Joey King, "Ramona and Beezus") to take her along for his interview for a Secret Service job at the White House. His interviewer is shocked to see him, but although Special Agent Finnerty (Maggie Gyllenhaal) is an old college flame, she knows he doesn't have the credentials for the job. John skates over the bad news with Emily, joining a tour where she's thrilled to meet her hero, President Sawyer (Jamie Foxx), but minutes later heavily armed terrorists who've set off an explosion at the Capitol Building take control of the residence and John's faced with looking for his daughter or rescuing the Chief Executive in "White House Down."

Disaster director Roland Emmerich has pummeled the White House twice before, in "Independence Day" and "2012." Name checking the former in this, the second 'Die Hard in the White House' movie of 2013, Emmerich serves up a buddy movie that may be the most unintentionally(?) hilarious comedy of the summer. At least Tatum and Foxx don't appear to be taking things too seriously. Unfortunately, everybody else is, particularly an earnest Gyllenhaal. James Vanderbilt's ("Zodiac," "The Amazing Spider-Man") screenplay employs such a vast conspiracy the whole is just ludicrous, especially when an 11 year-old's talent for flag twirling becomes a crucial climatic bit of heroism. Your enjoyment of the film will rest on whether you find these events, which includes a limo chase scene on the White House lawn with the President attempting to fire a rocket launcher, funny or simply loud and annoying. There's a lot in common with this year's earlier "Olympus Has Fallen," including use of secret passageways, child endangerment and nuclear threats. This President, though, is clearly modeled on the Obama of 2008, on the political ropes for attempting peace by withdrawing troops from the Middle East. Sawyer likes to do 'a thing' as he returns to the White House, buzzing the Lincoln Memorial, and keeps a pocket watch given to Lincoln by his wife. He also has a closetful of basketball sneakers, a bedside drawer stuffed with nicotine gum and a wife who's away in Europe. The "Die Hard" elements include the terrorists' unknowingly holding a family member of the man who's outwitting them, a scene on top of an elevator and a Eurotrash hacker. And then there's the hero's name (John Cale / John McLean) and his penchant for wearing a wife beater.. New dad Tatum gets his first opportunity to play dad, but he's more interesting trading quips with Foxx and doing a lot of his own stunt work (Emmerich makes sure we see his face as he falls through a glass ceiling). The camera loves Joey King's expressive face, but the youngster's saddled with such dumb moves as hiding behind curtains when she hasn't got a gun to her head. Michael Murphy (HBO's 'Tanner on Tanner') and Richard Jenkins ("The Cabin in the Woods") play power games as the Veep and Speaker, the strength of their outward desire to take the helm in inverse proportion to how they'll perform. And then there's James Woods as Security Chief Martin Walker, whose departure from his wife before a day's work and retirement party clearly signal something. Also on board are 'The Wire's" Lance Reddick as command central's General Caulfield, "Twilight's" original Victoria Rachelle LeFevre as Cale's ex and "Zero Dark Thirty's" Jason Clark as terrorist leader Stenz. Nicolas Wright goes for comedy as tour a guide overly protective of his domain. "White House Down" is cheesy and ridiculous, Emmerich's exterior shots outside White House gates looking like people in relief against backdrops. He spends a lot more effort staging violence of every stripe from hand to hand combat to explosions to Black Hawk downs. If you take any of it seriously, you'll hate this movie, but if you find enjoyment in the remarkably bad, it's a blast.