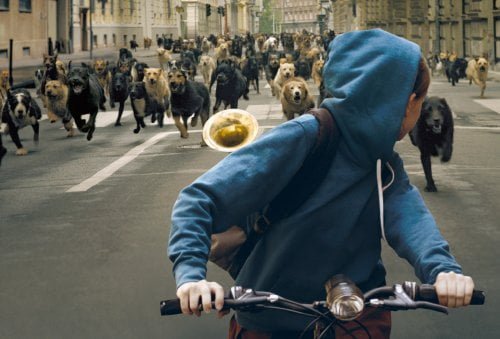 Stuck between her divorced parents, 13-year-old Lili (Zsófia Psotta) is not at all happy when she must spend 3 months with her father Dániel (Sándor Zsóstár), a humorless slaughterhouse inspector. He has no use for her beloved dog Hagen (Luke and Bodie), a large mutt now heavily taxed by the State in an effort to keep Hungarian hounds purebred. When Lili refuses to take Hagen to the pound, dad dumps the dog on the side of a busy road and while Lili tries to find him, Hagen undergoes more cruel betrayals out in the world of the "White God."

Hungary's submission for the 2015 Foreign Language Oscar will be tough going for animal lovers, but cowriter (with Viktória Petrányi and Kata Wéber)/director Kornél Mundruczó's story of subjugation and rebellion is nothing if not humane. The movie works on two levels - that of a girl and her dog and as an allegory for any society or group that exploits another (Hungarian Prime Minister Viktor Orbán was silent last year when the ruling party leader called for genocide of their Roma gypsy population, referring to them as animals). Lili, who plays in her school orchestra, pulls out her trumpet to calm Hagen when he's been banished to the bathroom on their first night in her father's apartment, but when she brings the dog to school practice, they're both thrown out and it is the last straw for Dániel. Hagen attempts to follow the car spiriting his mistress away before settling down beneath a highway overpass. The next morning the first thing the dog finds is the decomposing carcass of one of his own. After a harrowing experience with a market butcher, Hagen finds a friend in a small terrier who leads him to an empty lot populated with other strays. Unfortunately the locale is well known by local dog catchers, who descend with snare poles. They take a special interest in the large and resourceful Hagen, who escapes with the aid of a homeless man. That man has ulterior motives, though, selling the grateful beast to a guy who resells to dog fighters. While Hagen undergoes hellish brainwashing, training and other horrific experiences, Lili campaigns with missing posters and loses herself in teenage debauchery until even she eventually appears to move on, her remorseful dad eager to mend fences. The manner in which Mundruczó brings the two back together is unexpected, a powerful visual allegory of its own. The filmmaker was wise choosing a species known for its capacity for unconditional love to make his point, its perversion all the more emotionally wrenching. Animal trainer Teresa Miller does an exceptional job, and if a couple of the more brutal animal sequences show their cinematic trickery it's perhaps an intentional show - Hagen's dog fight is clearly heightened by sound that, were it removed, would reveal two bloodily made up dogs playing, although Dávid Jancsó's ("Essential Killing") cutting shores up the illusion. Sound design brings us into Hagen's state of mind, that fight staged like many a cinematic boxing match. (The hundreds of dogs used in the film all came from shelters and all were adopted after the film was completed.) Grade: