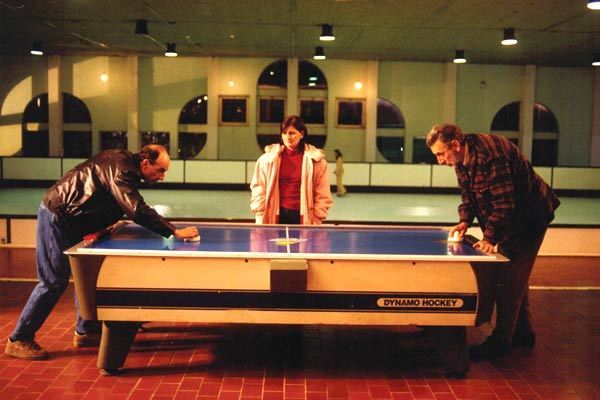 Jacobo Koller (Andres Pazos) is the dour owner of a struggling sock factory in Montevideo, Uruguay. Every day he goes through the same, dull routine: get up, drive his rickety car to his factory (where his loyal shop manager, Marta (Mirella Pascual), waits patiently every morning), starts the machines and has his cup of tea. This custom is about to be upset by the arrival of Jacobo’s more prosperous brother, Herman, for their late mother’s matzeiva (the ceremonial laying of her headstone one year after her death) in “Whisky.”

A year after his mother's death Jacobo Koller (Andrés Pazos) must face his long ignored and more successful brother, Herman (Jorge Bolani), when her tombstone arrives and a dedication ceremony is planned. The lonely sock factory owner wants to impress his brother with a normal family life and so he asks Marta (Mirella Pascual), his most faithful employee, to move in for a few days. She agrees and gives his gloomy apartment a woman's touch in "Whisky." And that title comes from a professional photographer's entreaty to "say whisky!" for the mock marriage portrait Marta believes will complete Jacobo's deception. Juan Pablo Rebella and Pablo Stoll's droll yet bittersweet film was Uruguay's submission for 2004's foreign language film but barely got a release in the United States. This wonderful little film is now available to all with First Run Feature's welcome new DVD release. The directors, who cowrote "Whisky" with Gonzalo Delgado, give us a view of Montevideo telescoped through the eyes of Jacobo. We see its streets from the back seat of his car, which he uses to deliver bales of socks to shabby distributors. We see outside the gate which he opens early every morning to let himself and Marta in to begin the day. Even the blinds in his office are broken. When Marta is admitted into his apartment, it is stuffed with the gloom and refuse of an invalid, a place not to live but to die in. Marta brightens perceptibly with her new role, shedding her washerwoman look with newly styled hair and even a touch of makeup, but it is not until Herman's arrival that the dynamics really begin to shift. While the actors who play them look remarkably like brothers, the characters are a study in opposites. Jacobo is a creature of stagnant routine, taciturn and low tech. Herman, also a sock manufacturer but in flashier Brazil, is a social creature, gregarious and impulsive. Herman, in fact, insists that the trio take a mini-vacation of sorts, and so they travel to the resort town frequented in their youth - Piriapolis. Marta responds to Herman's open nature and although it is unsaid, we can deduce her agenda in agreeing to play Jacobo's wife. When these older folks run into a newlywed couple at the hotel little signs and symbols begin to play out, like Marta's loss of her 'wedding ring' in the hotel swimming pool. Jacobo's use of their advice in order to maintain the status quo goes outrageously awry. The filmmakers are incredibly adept at relaying so very much almost imperceptibly. Jacobo's gaze into a shop window, where he spies an overtly cheerful couple's photo framed in gaudy pink, is a laugh out loud moment. Marta's unveiling of her ability to repeat back anything backwards instantaneously is a delightful surprise and the tip of the iceberg in what the man who has known her for years has neglected to discover. A general outlook on life is reflected in the placement of a refrigerator magnet. "Whisky" affirms a love of life, even if it is at the expense of one who fails to see it. It's a wise and perceptive little comedy which trails whiffs of melancholia in its wake. (The DVD release includes an interview with the filmmakers.)

Jacobo’s company struggles to stay alive in the depressed Uruguayan economy. Herman, who owns a sock factory in Brazil, is far more successful, exporting his wares to other countries and purchasing brand new Italian machinery. Herman is also happily married, something his older brother is definitely not. Jacobo is jealous of Herman’s success in business and love and cooks up a ruse to make him think that he, Jacobo, is also contentedly wed. He asks Marta to “help out at home” and pretend that she is his wife. The dutiful Marta agrees and turns his shabby bachelor pad into a cozy home of a married couple. The ruse works. Herman is so happy with his visit with his long-estranged brother that he insists Jacobo and Marta spend the weekend with him at a popular, though it is off-season, resort. Marta is delighted with the invitation but her “husband” is less than thrilled. Reluctantly, he agrees to continue the sham and the trio heads to Piriapolis. Marta blossoms with the new adventure while Jacobo only gets excited playing air hockey. Herman, at one point during their holiday, gives his brother a sizable packet of money to compensate him, he says, for taking care of their mother during her waning years. Sullen Jacobo refuses the offer, at first, but finally agrees to accept the money. But, he gets up in the middle of the night and sits in the hotel lobby wondering what to do about the unwanted windfall. A young couple, the only other guests in the empty hotel, pass by him as they drunkenly weave their way back to their room from the casino. “24 never wins,” she tipsily declares to her husband. Overhearing them, Jacobo decides to lose the entire bundle at the roulette wheel. He places the entire bundle on the unlucky number 24. But, instead of losing, he doubles his money and decides to give the considerable wad to Marta. They see Herman off and head back to their dull routine. That routine is about to change forever for Jacobo. This low-key tale, by sophomore Uruguayan filmmakers Juan Pablo Rebella and Pablo Stoll, takes its wry look at the lives of three average people with a straight face. Buried beneath is a funny, heartfelt character study of two people whose dull, monotonous lives would probably continue that way forever – until the arrival of Herman who, unknowingly, will become the catalyst for change. There is a great deal of charm contained in “Whisky” (the title is a variation on the photographer’s command, “say cheese”) that makes you invest in its characters. As you watch things unfold, you feel that Jacobo should marry Marta, not just pretend. She, a plain Jane type, blooms like a flower with Herman’s attention and kindness. Herman really enjoys his visit without ever realizing that his brother is pretending to be something that he’s not. The story, by the helmers and Gonzalo Delgado Galiana, is very different from what we are used to in American independent film. It doesn’t deal with sex changes, family angst, finding oneself, drug abuse or a murder mystery – some of the themes of recent indie films. Instead, we get a little film where nothing really happens” but, still, changes take place in the lives of Jacobo and Marta. The droll wit is also tempered with the mystery of Marta. Why is she so loyal to Jacobo, who treats her more like a fixture than a person? Why does she agree to help him with the subterfuge to fool Herman? And, what happens to her in the end? “Whisky” leaves you with more questions than answers and that is a refreshingly different thing.