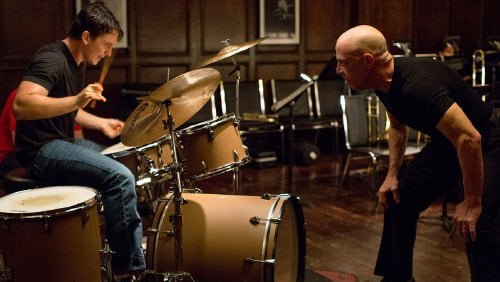 Andrew Neyman (Miles Teller) dreams of being one of the world’s great jazz drummers and he begins his first year at the prestigious Shaffer Conservatory. There, he meets Terence Fletcher (J.K. Simmons), a tough taskmaster who conducts the school’s competitive Studio Band. Fletcher asks Andrew to join the jazz band, an invitation that will change the ambitious young man’s life in “Whiplash.”

Andrew Neiman (Miles Teller, "The Spectacular Now," "Divergent") is a freshman at NYC's prestigious Shaffer Conservatory of Music with a committed goal of becoming one of the greatest jazz drummers in history, despite having grown up in a non-musical household. He's thrilled to be noticed by legendary instructor Terence Fletcher (J.K. Simmons, "Juno"), but the man's sadistic and humiliating teaching methods will leave Andrew with "Whiplash." Writer/director Damien Chazelle ("Guy and Madeline on a Park Bench") begins his film with a black screen, the sound of a drumbeat escalating into a frenzy, before we see Andrew isolated with his kit at the end of a hall. Tunnel vision. In one brief moment, Chazelle's set his primary theme. Andrew obviously recognizes the bullet-headed man sleekly clad all in black who stops at the door and turns a simple question ('Why'd you stop playing?') into psychological terrorism. But Fletcher returns to Andrew's class and informs him he's to appear in his band room at 6 a.m. It's quite clear the man's seen something, but he toys with the hopeful drummer, always keeping him off guard. When Andrew commits a cardinal sin at a competition by losing sight of a music folder for a matter of seconds (the incident reeks of manipulation), Fletcher's 'core' drummer Tanner (Nate Lang, "What Maisie Knew") is demoted, Andrew put into his place. The stakes are raised and the game gets more brutal. "Whiplash," which won both the Grand Jury and Audience prizes at the 2014 Sundance film festival, is one of the best films of the year. Chazelle's psychological study of the all encompassing drive to become great vs. the rationalization of the torturous tactics used to 'create' greatness is both a gripping suspenser and emotional father/son drama featuring top notch jazz and outstanding performances. Teller, who does his own drumming here, is so consumed he'll take down anyone in his path, even obliterating the budding relationship with the lovely Nicole (Melissa Benoist, TV's 'Glee') his initial success gave him the confidence to pursue in the first place. Only with Simmons do we see the underlying panic that he may not have what it takes, Fletcher's every tiny bit of confirmation allowing a self satisfied smirk to escape. When he drums, Teller is completely possessed. But it is J.K. Simmons who owns the film as the tyrannical teacher who's adopted the legendary tale of Charlie Parker's evolution into greatness after having a cymbal thrown at his head as his means to an end. Simmons shifts from the quiet encouragement his students yearn for into a spitting, snarling attacker in the blink of an eye. The film's dynamics are epitomized in one scene where Fletcher reduces Andrew to tears demanding an infinitesimal adjustment in his tempo that he illustrates with physical abuse. The actor's delivery of his caustic takedowns are both hilarious and cringe worthy. In the background, there's Andrew's single dad Jim (Paul Reiser, TV's 'Mad About You,' 'Married'), a failed writer turned high school English teacher. Andrew goes to the movies with his dad, eating around the Raisinets Jim puts in his popcorn, a foreshadowing bit of symbolism. Jim is a nurturer who doesn't understand his son but supports him, at least until Andrew's contempt for his cousins' football achievements comes bubbling up at the dinner table. When Andrew's emotional struggle with Fletcher reaches its pinnacle, Jim is horrified by how far the man has driven his son and takes an action that will set the stage for a second, more destructively devious, showdown at the JVC Jazz Festival. The climax is astonishing, a devastating triumph. The film's title is a double entendre, not only referring to a pivotal jazz piece but the torture vs. nurture methods Andrew is buffeted between by teacher and father. Chazelle, who based his screenplay on his own music school experience, has constructed his film beautifully, using closeups to punch through the emotions on display (cinematography by Sharone Meir, "Mean Creek," 2009's "The Last House on the Left"). The film has a great, dynamic tempo, tightly edited by Tom Cross. Grade:

What we have here is a two hander with Andrew the driven drummer, a rebel with a cause, and Fletcher, a martinet who rules his band with an iron fist. It is a battle of wills as the teacher pushes his musicians to the breaking point to make them excel. The fight, though, is lop sided as Fletcher wields his power like a hammer, abusing the band members both verbally and physically. The screenplay, by sophomore director Damien Chazelle, gives the bulk of the great lines to J.K. Simmons who revels in the audacity of the insults that Fletcher hurls like cannon balls. Great lines and a great performance make for strong notice at year’s end for Simmons. The other great thing about “Whiplash” is the terrific use of music, particularly jazz, that had me tapping my toe through the whole film. And, I found myself humming the music and hearing it in my head for hours afterward. Miles Teller is a busy young actor and he is proving himself to be quite capable. He takes a back seat, in “Whiplash,” to his co-star but that is because of the great role that seems written specifically for Simmons. Where Teller shines best is when he is behind his drum kit and trying to prove himself to be the next Buddy Rich. Watching Teller, you would think that he was born with a pair of drumsticks. As I watched “Whiplash” and enjoyed the amazing music, I thought of my dad. He loved big band jazz and he would have loved to see and hear this film. I wish he could.