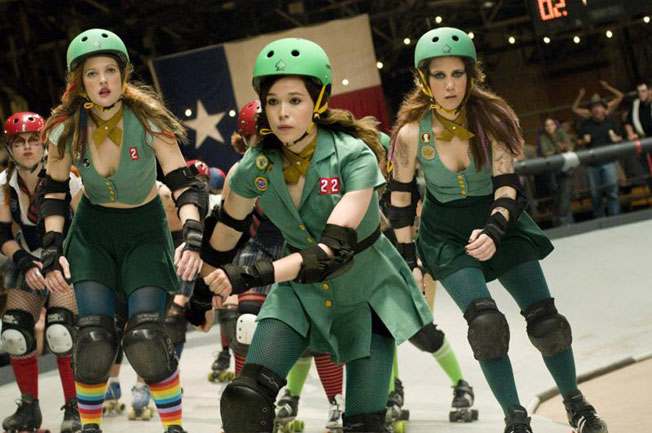 Bliss Cavander (Ellen Page) is 17-years old and dominated by her beauty pageant-obsessed mother, Brooke (Marcia Gay Harden). She is tired of small town life in Bodeen, Texas, and needs a change. On a shopping trip to nearby Austin, Bliss has her head turned when the ladies from the local roller derby team skate into the boutique and invite her to an exhibition match. This catalyst will change Bliss’s humdrum life forever in “Whip It.

A coming-of-age teen movie, an underdog sports flick, a mother-daughter drama, a little romance and a nicie-nice rags–to-riches fantasy tale are the things that make up the debut by first-time director Drew Barrymore. Unfortunately, none of these threads actually knit together to form a whole, coherent fabric and, considering the filmmaking (at least, acting) credentials of the tyro helmer, I was very disappointed in her premier effort behind the camera. Everything about the story, by Shauna Cross adapting her novel, reeks of cliché and Barrymore trots them all across the screen. A fairy tale should have some element of magic to it but “Whip It” just seems plain implausible. For example, every one of the roller derby players is twice the size of Bliss but she is able to go toe to toe with the sport’s best. She should have been stomped out like a bug but never is because everybody, even the nominal bad guy girl, Iron Maven (Juliette Lewis), plays fair. Like this is real life. This is not the Roller Derby I remember. The excellent cast includes Page, Harden, Daniel Stern, Kristen Wiig, Drew Barrymore, Lewis and others but all are hampered by the convoluted, over long script that tries to be all the aforementioned film genres but fails to give proper shrift to any of them. Page is as likable as ever but this is no “Juno” character. The rest of the players are left with two-dimensional characters used to fill all of the clichés trotted forth. Barrymore’s Smashley Simpson represents one of those cases where the director should have hired a different actor for the role. “Whip It” is the kind of movie that could have been good at a tightly edited 80 minutes. Instead, at 110 minutes, (the last 30 were interminable), it is a bloated, unfocused debut that does not know what it wants to be.