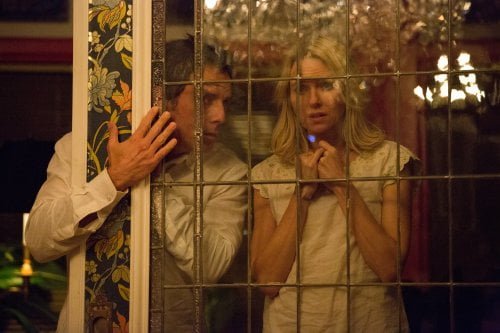 Josh (Ben Stiller) is middle aged and has been working on his sophomore documentary for ten years, so when Jamie (Adam Driver) introduces himself as a big fan after Josh's continuing education class, Josh thinks he's found a protege. Impressed by Josh and his girlfriend Darby's (Amanda Seyfried) hipster lifestyle, Josh and his wife Cornelia (Naomi Watts) decide to try new things "While We're Young."

Writer/director Noah Baumbach ("The Squid and the Whale," "Greenberg") returns to the star of his 2010 mid-life crisis movie "Greenberg," but this time around, while fitfully amusing, the results aren't as satisfying. While "Greenberg" had pointed observations to make about a middle aged egotist and his relationship with the younger generation and his own past, this one is muddied by unclear intent and sketchily defined female characters. Josh is married to the daughter of highly regarded documentarian Leslie Brightman (Charles Grodin), whose films she produces and whose shadow looms over Josh's stalled career. As Josh begins to delight in Jamie and Darby's company listening to vinyl, rollerblading and other retro pursuits, Cornelia finds she no longer fits in with girlfriends all experiencing motherhood (the film's first shot is of best friends Marina (Maria Dizzia, "Martha Marcy May Marlene" and Fletcher's (Beastie Boy Adam Horovitz) newborn set to a music box version of Bowie's 'Golden Years'). Soon Josh and Cornelia are hanging exclusively with the twenty-five year-olds, visiting a shaman (Dean Wareham, "Frances Ha") for drug induced introspection and hiking through subway tunnels. When Jamie proposes a documentary based upon meeting face-to-face with the first person to connect through his brand new Facebook account, Josh, inspired by Jamie's 'generosity' (this though he glowers every time Jamie ignores a restaurant tab) agrees to assist with no credit expected. He advises the young man that his premise is a bit thin and is floored when the old high school classmate who looks him up is Kent (Brady Corbet, "Martha Marcy May Marlene"), an Afghani war vet with PTSD. Then Josh catches Jamie in a lie involving Brightman that proves to be the first crumb in a trail. While it is clear Josh has been spinning his wheels, it's not clear if Cornelia feels similarly creatively stifled because of her work's reliance on family ties. Similarly, Darby appears perfectly happy...until she's not, conveniently when her mate's come under suspicion. Baumbach emphasizes middle-aged ties to technology as the youngsters revel in old ways of doing things, yet Jamie's approach to filmmaking is to spread a wide net, including videoing Josh at the most inopportune moments (Driver's expression at said moments suggests a subplot that never comes to fruition). "While We're Young" has its moments (Watts dancing to hip hop, Grodin critiquing his son-in-law's six and a half hour cut, Stiller skateboarding with arthritis, Tipper's (Dree Hemingway, "Listen Up Philip") tee shirts), but by the time its central couple has made a life-defining decision, one's left wondering how they'll support it. Grade: