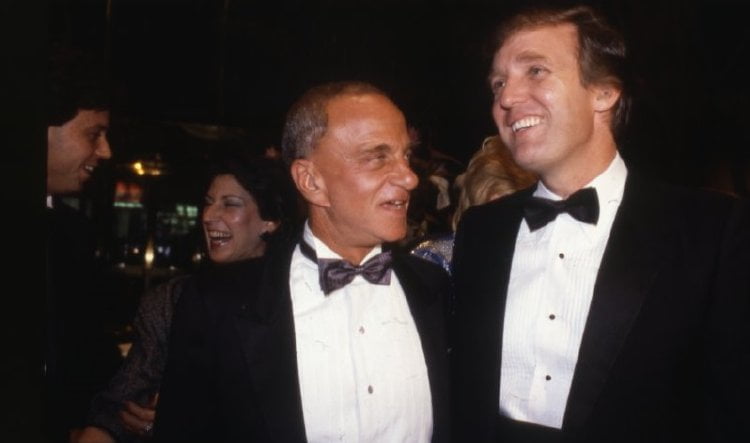 Roy Cohn will be remembered for two things: His involvement as chief prosecutor (and persecutor) for Senator Joe McCarthy during the 1954 Army- McCarthy hearings; and, his role as chief fixer for then private citizen Donald Trump, whose plaintive cry became “Where’s My Roy Cohn?”

The son of the ‘ugliest woman in the Bronx’ from privileged family and an ambitious man promised a judgeship should he marry her, so prized his unconventionality a cousin says he was the epitome of the ‘self-hating Jew.’ He graduated from Columbia University at 20, a year before he could legally take the bar exam, and by the age of 23 he was chief counsel to Senator Joseph McCarthy during his infamous hearings. Is it any surprise that the man who represented mob bosses and mentored Donald Trump believed one should admit nothing, never apologize, lie repeatedly to avoid inconvenient truths, evade taxes, wield lawsuits as weapons and deflect by smearing innocent people? Director Matt Tyrnauer (“Studio 54”) tells his story, titling it after Trump’s Jeff Sessions complaint, “Where’s My Roy Cohn?”

If it were not for the fact that he was very smart and, although he denied it, homosexual, almost everything we hear in this documentary about Roy Cohn could be and has been said about his protégé currently in the Oval Office (another protégé, Roger Stone, is a frequent talking head here). Tyrnauer uses a standard format for his biographical documentary, using archival photos and footage interspersed with talking heads, many of those taken from older interviews. We get Cohn’s greatest hits - his unethical collusion with the judge in the Rosenberg trial which resulted in their executions, the McCarthy hearings, the outing and persecution of homosexuals holding government jobs, the injection of a third party candidate in the New York State primary to throw the presidential nomination to Ronald Reagan, the rumored insurance scam which cost a man his life, the smearing of Geraldine Ferraro and protection of the mob. Cohn was finally brought down when he began stealing from his own clients, resulting in his disbarment.

There are plenty of unsavory anecdotes and some surprising bits of humanity, like Cohn’s love of stuffed animals. It is distressing to see how welcomed he was by New York society, a long time friend of Barbara Walters (Cohn claimed they were engaged, she denied it).

If you are left wondering whatever happened to G. David Schine, the man Cohn was so obsessed with that when he was drafted into the Army the response was another McCarthy communist witch hunt, you are not alone. Tyrnauer never questions the scandal surrounding the relationship which sparked McCarthy’s Army hearings, eventually causing his downfall with the Army’s Chief Counsel Joe Welch’s ‘Have you no decency’ comment, but neglects to tell us here that Schine married Miss Universe in 1957 and remained married to her until their death in a plane piloted by their son in 1996.

That his sleazy tactics were successful for so long have had an undeniable impact on American history. Cohn died of AIDS while denying he had the disease. His good buddy, Trump, who used to call him multiple times a day, abandoned him when he needed friends the most.

I have, for many years, been familiar with the notoriety of Roy Cohn and his caustic effect on our democracy with his demagogic zeal and disdain for the law. For a man like Cohn the philosophy is: do whatever needs to be done to finish the job. Whatever.

Documentary filmmaker Matt Tyrnauer does a solid job in telling us of the life and times of the dead-eyed man without a soul. The film follows a routine chronology of the man’s “accomplishments,” like ruining lives with inflammatory, often unsubstantiated, accusations of treason (look to his involvement in the Rosenberg trial and execution and the Lavender Scare).

I looked forward to seeing Tyrnauer’s document about the evil man and, while I am pretty familiar with Cohn’s professional life, the filmmakers expand and dovetail his story to delve into his personal life, too.

After his stint helping McCarthy destroy the lives of innocent people and before his role as the Trump fixer, Cohn based himself, from about 1955 on, in the corrupt land of New York City. There, his contribution to our society consisted of representing, and getting off easy for murder, such Mafia notables as Tony Solerno, Carmine Galante and John Gotti.

Tyrnauer covers Cohn’s alleged homosexuality which, at one point in the film he presents a blatant non-denial denial of it. Cohn, by the way, died from complications from AIDS. The film also brings out his professional misconduct that eventually led to his disbarment for unethical behavior.

What I got out of “Where’s My Roy Cohn” is that everything I thought of dead-eyed soul-less manipulator of evil is well founded.