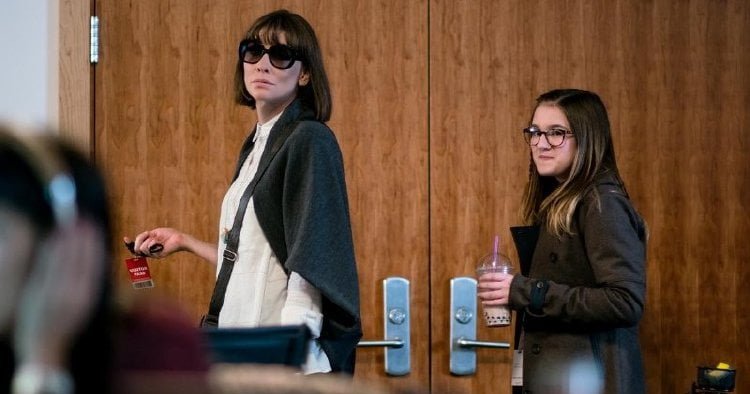 Bernadette Fox (Cate Blanchett) was once, 20 years ago, a young, budding genius in the architectural world. But, a career mistake drove her out of the business and she has lived a near reclusive life ever since. When her long-ago promise to her daughter, Bee (Emma Nelson), finally comes due, she disappears in “Where’d You Go Bernadette.”

Since moving to Seattle for her husband Elgie's (Billy Crudup) job at Microsoft, architect Bernadette Fox (Cate Blanchett) has been unmoored. Her best and only friend there is her daughter Bee (newcomer Emma Nelson), but even Bee is giving her anxiety because, promised anything she wanted if a report card was aced, Bee's chosen a family trip to Antarctica. After causing a disastrous problem for neighbor Audrey (Kristen Wiig) and learning her online Indian assistant Manjula is actually part of a Russian identity theft ring, on the eve of their departure the wife and mother has left Elgie and Bee to wonder 'Where'd You Go, Bernadette." In addition to her physical location, that title can also be read as Bernadette's own selfhood. As adapted from Maria Semple's best seller by cowriter (with his "Me and Orson Welles" team of Holly Gent and Vincent Palmo Jr.)/director Richard Linklater ("Before Sunrise," "Boyhood"), the epistolary book's comedic, misanthropic vitriol has been toned down in favor of the sweet mother-daughter story and lack-of-artistic-outlet character study at its heart. Those who loved the book may not be amused while those who were not as charmed may find the movie version preferable. I fall in the latter camp. Narrating the story, fifteen year-old Bee is aware that her mother has lost her way, distracted by the danger signals Bernadette now sees everywhere. The family lives high atop a gated hill in a once majestic, now dilapidated Catholic reform school where buckets catch leaks and blackberry vines grow under the carpets. It's those invasive vines which become a source of contention between Bernadette and Audrey, the neighbor down the hill asking for their removal so they do not encroach upon her yard. Audrey's planning a swanky fund raising brunch for the Galen St. charter school, an institution Bernadette despises despite Bee's attendance there. Bernadette acquiesces, but she knows something Audrey doesn't and, to add insult to injury, Bernadette has a mean-spirited billboard erected on her hill. Decked out in Anna Wintour hair and glasses, Cate Blanchett spins Bernadette with an AD/HD bent, a woman jumping from one project to the next, constantly assigning Manjula tasks via voice text. When even Manjula cannot get her a prescription for Haldol, Bernadette ventures out to her local pharmacy where Elgie, walking by with coworkers (including his assistant Soo-Lin (Zoe Chao), a friend of Audrey's who doesn't get a lot to do here), is horrified to find her asleep on a couch. It is not until Bernadette meets her old mentor, Paul Jellinek (Laurence Fishburne), for lunch, that we get to the root of the event which so unhinged her, the destruction of the project for which she'd received a MacArthur Genius Grant, stunningly visualized here (watch for a villainous cameo). That lunch is crosscut with Elgie consulting with therapist Dr. Kurtz (Judy Greer), then both of them receiving the F.B.I. Blanchett's escape from Bernadette's intervention is handled brilliantly by the actress, her connection with a most unlikely coconspirator one of the film's most affecting scenes. Linklater has really invested in his production, one so varied and eccentric it recalls a Wes Anderson film. Both of Bernadette's homes, the one she currently lives in and the one that was destroyed, are places to marvel at, the prior a place of stained glass and retro wallpaper, the latter one of natural woods and 'knitted' bifocals. Things take a starkly different turn in the film's third act, Bee convinced she'll find her mother in the Antarctic, she and her dad's tourist boat chasing the prior one's schedule. Amongst the bergs are a kayaking researcher, Becky (Troian Bellisario), and a staging station where Antarctic expedition manager (Kate Burton in a tart turn) fields strange requests. Roll out credits give us yet another treat while also suggesting that the film's running time may have been pared down With "Where'd You Go, Bernadette," Blanchett and Linklater have teamed up to convince us that the stifling of creativity is bad for the soul. Take it from those who should know. Grade:

This tome, by director Richard Linklater, is adapted from the 2012 novel by Maria Semple and it feels like someone’s fantasy imaginings, rather than something real and possible. I say that because of the main character, Bernadette. She is an intelligent – and very well off – recluse who got off the social and professional grid decades before, mainly because her genius was questioned by others in her field. She is rude to others and freely declares she does not like people. But, that is okay because she has lots of money, otherwise she would be considered the crazy lady who lives in the spooky house on the hill. Instead, she is seen as “eccentric.” That Bernadette is rich and a reclusive, facing her inner demons is looked at as a noble thing. But, her quest – for reasons laid out in the story – takes her to the Antarctic and, since that is something that, say, 99.999% could not even dream of, hence my description of “someone’s fantasy imaginings.” All this said, I never wrapped my arms around any of the characters in the story or the story, itself. The whole thing feels manufactured to draw the viewer into Bernadette’s rebirth from grumpy, envious recluse to a woman who, once again, finds her true potential. But, I do not buy it. It feels, to me, like a paycheck movie.