Where Do We Go Now? 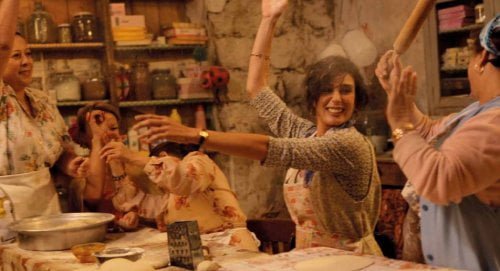 From a small Lebanese village comes 'a tale of women clad in black,' a group of Christians and Muslims banded together to hide religious strife from their men in an effort to stop the perennial violence. At first their efforts are simple ones - shouting over televised news reports and burning newspapers, but when goats and chickens invade the mosque and blood is found in the church's holy water font, the women know it is time to step up their game in "Where Do We Go Now?"

This film was the winner of the Audience Award at the 2011 Toronto Film Festival, an award which has gone to the Academy Award's Best Picture two out of the past three years and it was made by cowriter (with Rodney Al Haddid, Thomas Bidegain, Jihad Hojeily and Sam Mounier)/director/star Nadine Labaki whose "Caramel" was a real charmer. But "Where Do We Go Now?," despite some well played comedy, is muddled right from the start. Beginning a film about religious conflict with a conciliatory celebration sends the first confusing message. An old goatherd cries over the loss of Brigitte, who 'never knew love.' Onto a mountaintop spit she goes, the Imam warning that 'only the right side is halal,' as the town gathers to watch television. But soon the movie being viewed is deemed too racy for the children and when the men stop on the news and reports of Christian/Muslim violence air, the women begin to shout so that they cannot hear. A jumble of villagers are introduced all at once, making it a bit difficult to find one's footing. Takla (Claude Baz Moussawbaa) is a Christian who owns the town's store. Amale (Labaki) is the town's great beauty and runs the cafe which Rabih (Julian Farhat), a Muslim, is renovating. It's not initially clear that there is a difference in religions between the two, but we can guess that by their shielded glances and the imagined sexy song and dance number they both engage in. Labaki stages this bit of romantic fantasy well, but then, it never really goes anywhere. Labaki's funniest idea is for the women to 'create' a miracle after the mosque/church debacle by having a statue of the Virgin Mary cry blood as Yvonne (Yvonne Maalouf), the mayor's wife, interprets her words, but Yvonne cannot let a good thing go and it is figured out too quickly - here was an element ripe for more comedy that Labaki let drift away. The film's most puzzling aspect is the women's decision to hire a troupe of Ukrainian strippers - we have no idea what their intent is, other than the obvious distraction - and when they do set a plan into action using the exotic blondes (also involving hashish and baked goods), it is a response to something which happened after they had already arrived. There are odd tonal shifts in the film. The idea of neighbor fighting neighbor or even brother fighting brother has been around for a long time. Labaki begins her film with a poetic dirge, the women performing a mourning dance out in the dusty terrain, then she immediately shifts to comedy. The film continues in this manner, with her own character erupting in a tirade against the men which would have perhaps been better suited as the film's climax. A mother's worst anguish is extreme to the point of madness yet is used to propel the stripper plot. Her final female gambit is, again, amusing, but the male response is to not get it when even her more remotely involved audience does. The film is never properly grounded. As with "Caramel," Labaki shows an ability to get natural performances from nonprofessional actors and to create a sense of place, but "Where Do We Go Now?" is a step back from that film. As a filmmaker, she attempts to do to many things and the loss of focus is felt.