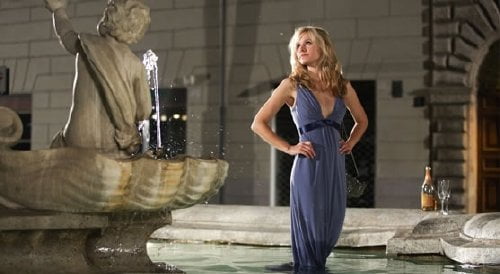 Single Beth (Kristen Bell) is the ambitious young curator at New York City’s esteemed Guggenheim Museum and is facing her biggest career challenge. At this critical time, her younger sister, Joan (Alexis Dziena) announces that she is getting married, in Italy in two days, and demands (nicely, calling on sisterly duties) that she be her maid of honor. This leads to a whirlwind 48 hours as Beth meets her mate, Nick, and loses him to another. A little drunk she wades into the nearby “love fountain” and picks out five coins tossed in by the lovelorn. Her selection will have unanticipated romantic results for Beth “When in Rome.”

Beth (Kristen Bell, "Forgetting Sarah Marshall") is an ambitious curator at New York City's Guggenheim Museum whose job cost her her last relationship. When her younger sister Joan (Alexis Dziena, "Fool's Gold," "Nick and Norah's Infinite Playlist") marries Umberto (Luca Calvani, "The International") in Italy, Beth arrives to perform Maid of Honor duties for 48 hours, but when she meets Umberto's Best Man Nick (Josh Duhamel, "Transformers") she starts to think "When in Rome." From the writers of 2009's worst film "Old Dogs" and a director with a psychotic filmography that goes from "Simon Birch" to "Ghost Rider" comes this painfully forced romantic comedy with an inexplicable cast. "When In Rome" isn't as bad as "Old Dogs" - its leads are fairly likable and there are a few - a very few - decent jokes, but its main interest lies in figuring out just why people like Peggy Lipton and Don Johnson came out of the woodwork to play parts with practically no lines (Johnson fares better than the blink-or-you'll-miss-her Lipton). Then there are talents like Anjelica Huston ("The Life Aquatic with Steve Zissou") playing Beth's imperious boss and character actor Lee Pace ("The Fall") as Beth's ex-boyfriend in a rancid bit of writing misdirection. The story is pretty stupid as well as inconsistent in its idiocy. After a ridiculous gag involving an Italian wedding custom, Nick comes to Beth's rescue only to turn the groom's family against her with his inept translation of her toast (Living Theater cofounder Judith Malina makes a rare appearance as a scowling Italian grandmother!). She leaves with a bottle of prosecco and two glasses to meet at the 'Fountain of Love,' but when she spies a woman in red giving Nick a smooch, she 'frees' four from love by picking up 3 coins and a poker chip out of the fountain. But what she's really done is made the four men (lucky picks those) who tossed the objects fall madly in love with her and when Nick reappears in New York with an explanation and the desire to see her she thinks he's one of them. It's "Three Coins in the Fountain" by way of "The Nutty Professor" with the production values of a low budget sitcom. And so Beth is accosted by Antonio (Will Arnett, "Blades of Glory," "The Rocker," looking absolutely ridiculous in a curly wig and caricature costume), an arist demanding to see her bare feet so he can complete his masterpiece. Gale (Dax Shepard, "Zathura," "Baby Mama") is an egotistical male model who keeps stripping off his shirt for Beth to admire his pecs. Al Russo (Danny DeVito) is a 'sausage king' who also happens to be one of 'the Gug's' benefactors. He keeps sending bratwurst baskets to woo Beth. Lance (Jon Heder, "Napoleon Dynamite") is a strugglingstreet version of Criss Angel who gets one laugh when Heder's "Dynamite" sidekick Efren Ramirez pops up. Seeing as how Beth has a quarter, a penny, a Euro and a poker chip, I'm not following the math that lines up with Nick, but note that the real owner of 'his' piece never follows Beth to New York like the others do. There are exactly two somewhat amusing gags in "When in Rome," which mostly takes place in New York. One involves a gimmick restaurant where patrons eat in total darkness (the hostess is played by "Flight of the Conchords'" Kristen Schaal wearing night goggles and the other has the yellow clown car of the movie's poster taking an elevator. The rest of the film is a series of paralyzingly painful miscommuniques and coincidences. The smitten quartet are an unappealing and unfunny bunch of misfits, although DeVito somehow escapes with his dignity. The film does nothing to celebrate its early Rome location - we see one small plaza - and cinematographer John Bailey, who once shot films like "Ordinary People" and "The Big Chill" and now shoots films like "Must Love Dogs" and "License to Wed" cannot seem how to account for the extreme height difference between the diminutive Bell and the towering Duhamel. Even the film's opening credits are cheesy and the less said about Sarah Edwards' costume design the better. "When in Rome" is probably best enjoyed on a weekday afternoon cable run when sick in bed with the flu.

What could have been a totally insipid romantic comedy is only half so due, in the main, to the solid cast. Also, two genuinely funny scenes raise “When in Rome” to a level of mediocrity. Otherwise, this is a typical piece of Hollywood fluff that has no basis in reality. Everyone is young and good looking (except for Danny DeVito) and seems to have endless supplies of money so they can commute from Italy to New York and look glam. When Beth returns home, four of the coins owners pursue her with romantic abandon. Sausage King Al (Danny DeVito) tries to sweep her off with gifts of spicy links. Lovelorn artist, Antonio (Will Arnett), obsesses over the pretty art curator, painting her 50-foot high image for all to see. Street magician Lance (Jon Heder) tries to use his prestidigitator skills to woo Beth. Finally, professional model wannabe, Gale (Dax Shepard), can barely take his eyes off her to admire his own reflection. Beth, though, only has eyes for Nick and him for her. Beth does not know why she is suddenly the object of so many suitors’ affection until her sister, phoning from Rome, tells her of the legend of the love fountain. If someone removes a coin from the fount, the previous owner will fall in love with that person. And, the only way to break the spell is for the one who removed the coin returns it to the fountain, personally. Of course, this stipulation is lost in the shuffle and Beth can solve her problem without setting foot out of New York. Director Mark Steven Johnson does his best with the lame script by David Diamond and David Weissman, the minds behind such hokum as “Old Dogs” and “Evolution.” Johnson has likable personalities in his actors and there is some spark between Kristen Bell and Josh Duhamel. The four suitors all have individual persona with each actor trying to give them some dimension, at least. “When in Rome” is a run of the mill rom-com that follows predictable paths to its happily-ever-after finale. Locations are supposed to be in Rome but I am hard pressed to tell if any of it was actually shot in Italy. Good use is made of the Guggenheim. Beside the two actual laughs in the film, the cast helps to pull this from the doldrums – but not far.