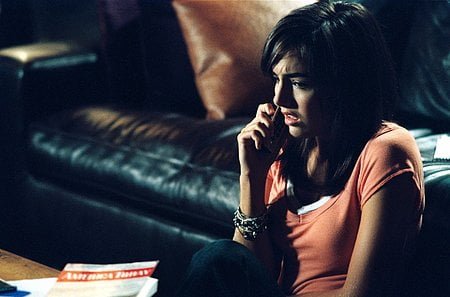 Jill Johnson (Camilla Belle, "The Ballad of Jack & Rose") is grounded after exceeding her cell phone minutes and must miss the annual high school bonfire party to baby sit instead. Her dad (Clark Gregg, "In Good Company") drives her to the fabulous, but remote, house of a doctor and his wife where she settles in with the children already asleep upstairs. Jill's thrilled with the chic opulence of her surroundings and all seems well "When a Stranger Calls."

Director Simon West ("Lara Croft: Tomb Raider") and screenwriter Jake Wade Wall update the 1979 cult classic with mixed results. While they show some genuine imagination incorporating today's technology and an ultra modern home into the urban legend-based original, they also employ hoary old scare tactics, inconsistency and implausibility. Still, the 2006 "When a Stranger Calls" has enough chilling moments to score a pass. There's more than a little "Halloween" thrown into this remake mix, beginning with the problems of high school romance. Jill's cell phone charges were incurred by her boyfriend, Bobby (Brian Geraghty, "Jarhead"), in his attempts to woo her back after he was caught being kissed by Jill's best friend Tiffany (Katie Cassidy). As movie girlfriends always seem to come in threes, Scarlet (Tessa Thompson, TV's "Veronica Mars") provides the single woman's voice of reason. This trio will provide touch points for Jill's communication with the outside world, as well as a suspect for her terrifying phone calls. Jill's given ample explanations for all types of out of the ordinary occurrences by her ingratiating employer, Mrs. Mandrakis (Kate Jennings Grant, "Kinsey"), who informs her that she may hear 'banging' from the third floor quarters as their live-in, Rosa (stuntwoman Rosine 'Ace' Hatem), comes and goes and that their son who inhabits the guest house frequently arrives unannounced. As if that weren't enough, the Mandrakises own a black cat, their house juts out over a pond that provides atmospheric fog and rippling light reflections and there's a life size bronze sculpture of a man at the head of the stairs straight out of a German Expressionistic horror film. One of the filmmakers' best ideas is to outfit the modern Mandrakis manse with lighting sensors, ensuring that not only can one not move about undetected, but that unseen presences may be announced. But the lighting is one of the first victims of the film's inconsistency. Early on, Jill is startled by a light set off by the cat, yet later that same cat is used as a jumping jolt when it leaps from a darkened room. The Stranger cuts electricity, only to atmospherically trigger the lighting system later. Jill scares herself testing a remote that abruptly turns on a flaming gas fire, but her weapon of choice is a fire poker. I suppose the fire implements may be forgiven as atmospheric decor, but the fire bomb issued from the fireplace later on may not. Rack that one up to implausibility, just like the appearance of a Stranger (Tommy Flanagan, "Sin City"; voice of Lance Henriksen, "Scream 3") victim dispatched outdoors but deposited on the home's third floor. There's also abandonment issues to account for, like Jill's establishment as a runner that's barely touched upon later and the elaborate attention to a slip of paper bearing the alarm system's code which fails to figure in the Stranger's invasion. Still, the film has many genuinely creepy moments and Belle does a good job projecting fear while acting intelligently and responsibly (yes, she does check the children). The house is designed with an outside peeper in mind (for those few who may not know the phone call trace punch line) and Flanagan is kept in shadowy profile, looking like a cross between that bronze artwork and Michael Meyers. Screenwriter Wall even works in a multi-layered reference to the canary in a coal mine that's a real gem. Best of all is our final look at the Stranger as he passes Jill in the back seat of a police car, with smoothly executed jump edits (Jeff Betancourt, "The Grudge," "The Exorcism of Emily Rose") rendering him like one of those oil paintings whose eyes follow you across a room. "When a Stranger Calls" is one of those frustrating films that squanders its own good ideas with sloppy genre cop outs, like the tacky hospital dream conclusion ripped right out of "Halloween 2," but for genre fans used to wading through scores of bad films to find the occasional goodie, this one ain't half bad.