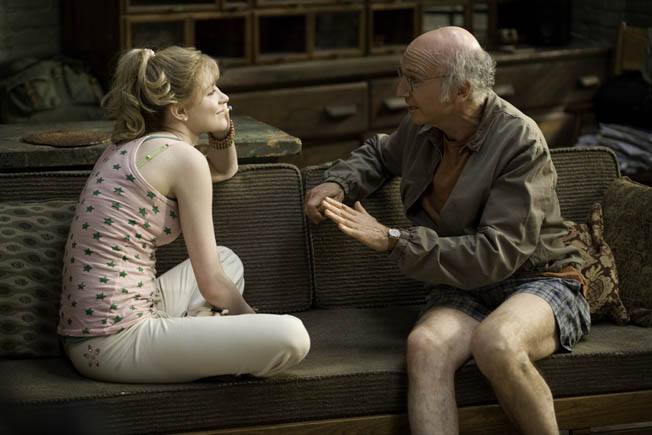 Having failed in his career, marriage and even a suicide attempt, Boris Yellnikoff (Larry David, HBO's "Curb Your Enthusiasm") has settled in as a misanthropic curmudgeon and self-professed genius. Returning to his cruddy apartment off Mott St., Boris finds Southern beauty pageant queen Melodie St. Ann Celestine (Evan Rachel Wood, "Thirteen," "The Wrestler") begging at his doorstop. Against his usual nature, he lets her in and before he knows it he's acknowledging a second marriage as "Whatever Works."

Writer/director Woody Allen ("Manhattan," "Vicky Cristina Barcelona") dusted off an old script he'd written with Zero Mostel in mind for his 44th film and it's been derided by many as Woody's same old schtick. Well, if it was written thirty years ago it is old schtick, but that doesn't make it any less enjoyable, just as Allen's older films still play like gangbusters. That said, "Whatever Works" is no "Annie Hall" but it's still fun and a return to Allen's beloved New York City after his European trio. Boris hangs with his buddies (Adam Brooks, Lyle Kanous and Michael McKean, "For Your Consideration") at an outdoor cafe, the better to get up and address the camera to the consternation of bystanders. He's fond of telling anyone who will listen why the human race is a failed species. Perversely, Boris makes his meager living teaching kids, all of whom he considers to be pathetic losers. When Melodie turns up (an admittedly awkward 'meet cute'), Boris immediately pegs her as a bimbo, but her upbeat attitude and willingness to learn grow on him. He eventually even realizes he might be lucky to have her, especially after he's pooh-poohed her suggestion of marriage and she retaliates by going out on a date ('That's a pretty aggressive outfit you're wearing - are you looking to end up in an abortion clinic?) After a year of wedded bliss, things take a drastic turn when Melodies mother, Marietta (Patricia Clarkson, "Elegy," "Vicky Cristina Barcelona") shows up. Marietta hates the very idea of Boris and immediately begins trying to set her daughter up with a handsome actor Randy James (Henry Cavill, "Tristan + Isolde," "Stardust"). New York also has a transformative effect on mom, who goes from being a Southern Church lady to a celebrated artiste who lives with two men, philosopher Leo Brockman (Conleth Hill, "Intermission") and art gallery owner Morgenstern (Olek Krupa, "Burn After Reading"). Things get even more interesting when dad John (Ed Begley Jr., "Pineapple Express") follows. And so Woody applies his theme not only to Boris, but to Melodie's entire family, as well as encores for his main couple. It's as if Allen took a Parisian romantic rondeley and gave it his own New York flavor. Allen, unfortunately, is getting too old to play himself, but as channelers go, David is a fine substitute, albeit flavored with some of the aggression of his "Curb" character. More surprising is what a delightful ditz Rachel Evan Wood has created. She's positively endearing. Weeks after Boris sarcastically tells her he got his limp from playing with the Yankees she asks 'When you see kids tossing a ball, do you miss spring training?' Her naivete combined with his cynicism make comedic chemistry. The film actually loses a lot of its momentum when Clarkson arrives and the focus is no longer solely on the oddly happy couple. It doesn't regain its speed until Clarkson's attention is diverted from her daughter by the attention of a man. There's also one scene Allen fumbles when the usually reliable character actress Marcia DeBonis ("13 Going on 30," "Twelve and Holding") clearly flubs her line as a mother attacking her child's chess teacher in a Chinese restaurant. But Allen's writing is full of outrageous lines (Boris on children - 'They should have concentration camp, two weeks mandatory') and running gags (Boris sings "Happy Birthday to Me" twice while washing his hands to ensure that they're clean; Melodie turns Boris's criticism of her use of cliches to her advantage) and for a movie about an ill-tempered misanthrope, it ends on a note of convivial hope.