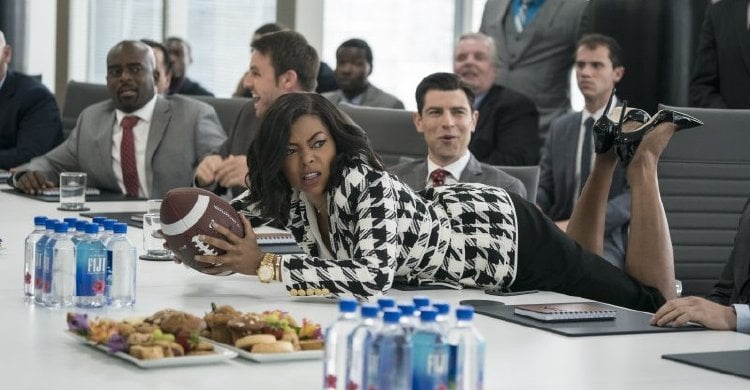 Ali Davis (Taraji P. Henson) is the leading sports agent at Summit Worldwide Management so she’s knocked out when she’s bypassed for partner by a lesser ranking male agent. But fortune is on her side when she meets psychic Sister (Erykah Badu) at a bachelorette party and drinks Sister’s tea, an elixir that allows her to read men’s minds and gain the upper hand by knowing “What Men Want.”

Back in 2000, Nancy Meyer had a hit with her Mel Gibson vehicle “What Women Want” about an ad exec whose bump on the noggin allows him to hear women’s thoughts. It was a pretty bad movie. This one is worse. Director Adam Shankman (“Bedtime Stories,” “Rock of Ages”), working from a hackneyed script with jaw droppingly awkward dialogue by ‘Veep’ writers Peter Huyck and Alex Gregory and “ATL’s” Tina Gordon, has dialed his whole enterprise up to 11 unleashing Henson’s worst instincts. After man child Eddie (Chris Witaske) gets the promotion, Ali marches into her boss Nick’s (Brian Bosworth) office where she’s told she doesn’t relate to men well. In order to prove herself, she has to land SWM’s biggest fish, hot NBA draft pick Jamal Barry (Shane Paul McGhie), and he’s got one strange obstacle in his dad, Joe “Dolla” Barry (Tracy Morgan), an all controlling parental nightmare. Although she has a supportive dad, boxing gym owner Skip (Richard Roundtree) who named her after the greatest in the sport, Ali does herself no favors by denying her assistant Brandon (Josh Brener) a promotion, by sidestepping her friends Olivia (Wendi McLendon-Covey), Ciarra (Phoebe Robinson) and bride-to-be Mari (Tamala Jones) and by prejudging her male coworkers, not all of whom are against her. And when she learns Dolla puts great stock in family, she makes that momentually idiotic romcom ‘mistake’ of pretending new romantic interest Will (Aldis Hodge) and his young son are hers without ever cluing them in on the ruse. With one exception, hearing men’s thoughts never actually seems to give Ali much of an advantage. Instead they’re used for unfunny ‘comedy,’ ridiculous sexual situations (Henson’s aggressive sexuality is cringingly unnatural to the point of violence) and hooking up Brendon with a closeted colleague (Pete Davidson). When Ali learns Mari’s intended is an unfaithful jerk, she waits until they’re at the altar to announce it, the better for an unneccessary wedding melee. When her success for SWM is betrayed by a duplicitous colleague who shafts the entire company, we’re expected to believe they’d hire him back. Henson’s shrill performance rarely settles down, so it’s suprising that it is banter shared with Tracy Morgan that provides some of the film’s better moments. Badu is amusing as the seer as interested in dealing weed as reading Tarot. But “What Men Want” is a punishing experience that no one will want. Grade: