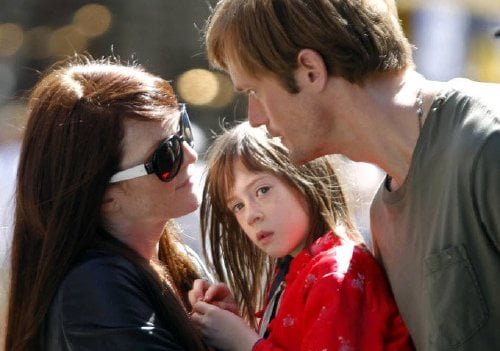 NYC based rocker Susanna (Julianne Moore) and her British art dealer common law husband Beale (Steve Coogan, "The Trip") are splitting up and when he's awarded custody of their daughter, the battle pitches higher when each makes an impetuous marital choice based more on their need for childcare than love and family. Susanna's former nanny Margo (Joanna Vanderham) is stolen away by Beale and Susanna marries groupie bartender Lincoln (Alexander Skarsgård, HBO's 'True Blood'), each of whom become pawns in the conflict of "What Maisie Knew."

Screenwriters Nancy Doyne and Carroll Cartwright contemporize the 1897 Henry James novel with smart choices (keeping Maisie a six year-old, the better to circumvent the questionable maturation of the Internet age) and directors Scott McGehee and David Siegel ("The Deep End," "Bee Season") elicit fine performances from their cast, but despite the material's modern relevance "What Maisie Knew" feels like a long build to a single punch line. Young Onata Aprile gives a naturalistic performance, but until the film's climax, her observational portrayal gives us little insight to what she's feeling except under the most extreme circumstances. (The only real indication we get beforehand is that Maisie tends to tell her parents she 'misses' them, whereas Margo and Lincoln are told they are loved.) Moore's a real monster here, a totally self-involved fading rock star who sends flowers to her daughter because Beale's allergic. Her idea of a fun sleep over is to treat two little girls to pile snack cakes three feet high then cover them with whipped cream and candy, before abandoning them to their own devices as she blares her latest concert video with her entourage. When Maisie's little friend Zoe (Sadie Rae), overwhelmed by the strange circumstances, begins to cry, she's returned to her father, Susanna remarking to her daughter that Zoe's mother 'was a Nazi, anyway.' Coogan plays Beale as more well intentioned, better able to connect to his daughter, but he fades fast in the face of real responsibility. He proposes exotic trips - first to Italy, later back to England, then withdraws the offers after his little girl's set on them. Maisie's world consists of being passed around, sitting in courtroom corridors and becoming the object of conflict when nobody picks her up from school. Margo cabs in from JFK, on the way to her honeymoon - when mom's a no show and the school won't release the girl to Lincoln, of whom they have no record. Lincoln's forced to bring Maisie along on his job, parking her at the bar with a Shirley Temple, but his wonderful connection with the young child isn't appreciated by Susanna, it's resented. After her honeymoon, Margo finds herself increasingly alone, except when she's called on for Maisie duty. It is no surprise that she and Lincoln form a bond. Then the man who won custody does the unthinkable while the woman who didn't proves why with a shocking move. Cinematographer Giles Nuttgens ("The Deep End," "Water") keeps his shots low to give us Maisie's perspective, using closeups for the adult drama and long shots to indicate Maisie's place within it. The filmmakers also give us the New York City that people actually live in. The film climaxes with a crucial moment between Maisie and her mother, one in which the young girl finally takes a stand and mom gets some introspection. We're left with an ideal moment, a promise finally kept. But Maisie's happiness may be ethereal, there's no real conclusion here, and after what this little girl's gone through you may just find yourself wanting more.