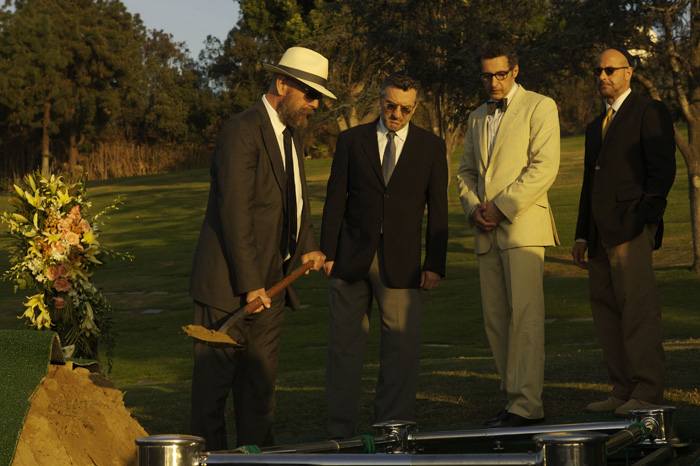 Ben (Robert De Niro) is juggling a recovering addict director who's pored everything into his artistic vision, a studio chief who wants said director's ending changed, two ex-wives, and a movie star who's just shown up on set with a beard and fifty extra pounds in director Barry Levinson's ("Wag the Dog," "Man of the Year") fictional retake of producer Art Linson's Hollywood memoir, "What Just Happened?"

Neither director Levinson nor star De Niro has been performing at their peak of late, so while "What Just Happened?" isn't a slam dunk, it is a refreshing up tick on the filmographies of both. De Niro, who played a Hollywood director back in 1991's "Guilty by Suspicion" and a producer in the 1976 F. Scott Fitzgerald adaptation of "The Last Tycoon," is no stranger to Hollywood insider pics, but those were historical looks at the industry - here we have a De Niro of the perpetual headset. Levinson opens with a documentary-like dose of Ben's reality at a Vanity Fair power shoot. Ben knows that the real heavy-hitters will be placed around the 'O' and the 'W' and when, despite his angling, he's told to stand to the right of the 'P' he feels his grip losing ground. At a test screening of his latest production, the Sean Penn starrer 'Fiercely' slated for the upcoming Cannes Film Festival, the downer ending is exacerbated by the director's bold decision to let the villains cap the hero's *dog*, a move that alienates just about the entire audience. Later, trying to reason with almost-one-year-sober auteur Jeremy Brunell (Michael Wincott, "The Crow," taking the Depp via Keith Richards route), Ben tells him the audience reacted 'like they took their kids to Disneyland and watched Mickey Mouse douse himself with gasoline and set himself on fire.' Unfortunately, that's not too far from what Brunell was aiming for, but studio chief Lou Tarnow (Catherine Keener, "Hamlet 2") threatens to pull the film from Cannes if the ending is not changed (an incident based on studio reaction to David Fincher's "Fight Club"). The next morning, Ben picks up teenaged daughter Zoe (Kristen Stewart, "Into the Wild," the upcoming "Twilight") for school and is told her mother, Kelly (Robin Wright Penn, "The Princess Bride," "Sorry, Haters"), wishes to speak to him and that he is actually allowed to go into his former house to do so. Ben obviously wants Kelly back, but he can never get away from his constant business calls long enough to pitch woo. During the course of the day, he'll discover screenwriter buddy Scott Solomon (Stanley Tucci, "Kit Kittredge: An American Girl"), who's trying to pitch Brad Pitt as a florist, is seeing is ex, will get squeezed between his latest film's studio head and tantrum-prone star Bruce Willis and be hit on by the girlfriend of a Russian dry cleaner who wants to finance future projects. As if Ben's life isn't insane enough, he runs into a tear-stained Zoe at the funeral of known womanizer and drug addict Jack L. McDonagh (a stand-in for CAA's Jay Moloney), a thirty-something hot shot agent who burned out too soon. De Niro is good at suggesting the stress, self-doubt and heartburn beneath an outwardly unruffled exterior and it's entertaining to watch him not-just-quite juggle his personal and professional life, especially as Kelly has an uncanny way of placing one of her hoped-for calls when he is in the middle of a major, at least in Hollywood terms, fracas. He's actually playing more than his usual-of-late scowl here - he's a lover, a dad, a deal maker, a pacifier. Keener's even better as the studio exec who doesn't need to imply a threat to make one, another unruffled customer but one with the chips on her side. Bruce Willis is fun taking the piss out of himself as an egotistical artiste (in reality, based on an Alec Baldwin incident while shooting Linton's "The Edge," a double irony because De Niro passed on the Hopkins role because he didn't want to fight a fake bear (!)) and John Turturro ("You Don't Mess with the Zohan") is the outward embodiment of the overwhelming stresses of Hollywood as his agent Dick Bell. The film is full of great little riffs, like the way Ben listens to 'Fiercely's' terrific Ennio Morricone score mix in his car and the L.A. landscape as seen from its interior. The interest of a beautiful woman is probably a bargaining chip and more than one alimony usually rides on the success or failure of the latest film. The offer of a seat on a private jet is the ultimate inside recognition, its retraction the weightiest brush off. In the past, the insider type films didn't fare too well, but in the days of EW and Entourage, "What Just Happened?" stands a chance of an audience. It's an amusing look at a dog eat dog culture where vicious battles are fought over whether or not a dog can get shot in make believe land.