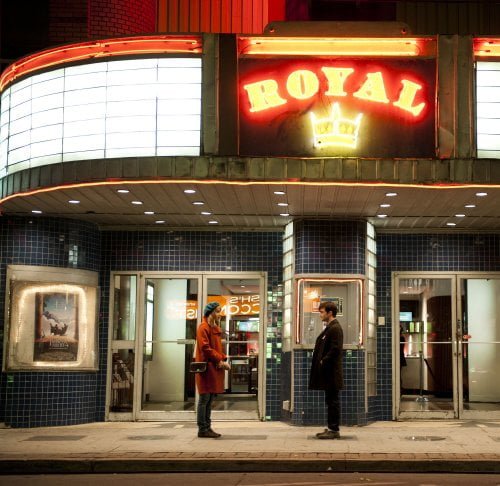 Wallace (Daniel Radcliffe) is a medical school dropout who, a year ago, was dumped by his girlfriend and he has had a hard time getting over her. Finally, after 300+ days of moping around alone, he decides to rejoin the living and goes to a party thrown by his best friend Allan (Adam Driver). He meets and instantly clicks with Chantry (Zoe Kazan), but there is a problem. She lives with her longtime boyfriend Ben (Rafe Spall). The two decide to be friends only in “What If.”

After 279 days, Wallace (Daniel Radcliffe) finally deletes ex Megan's last voicemail and goes to a party at his old college roommate Allan's (Adam Driver, HBO's 'Girls'). Allan scores with Nicole (Mackenzie Davis, AMC's 'Halt and Catch Fire'), somebody else's girlfriend, and Wallace meets somebody else's girlfriend too. Chantry (Zoe Kazan, "The Exploding Girl," "Ruby Sparks") is clearly a soul mate, sharing the same warped sense of humor, but her five year relationship with UN lawyer Ben (Rafe Spall, "I Give It a Year") keeps a question hanging in the air - "What If." Another shot fired across the bow at Hollywood's attempt to kill the romantic comedy genre, "What If" may veer uncomfortably close into some too cutesy moments and scatological bad taste, but it always manages to right itself, buoyed by its charming star pairing of Radcliffe and Kazan. Elan Mastai's screenplay, based on the play 'Toothpaste and Cigars,' was on Hollywood's Black List, a yearly survey of the best unproduced scripts, and "Goon" director Michael Dowse clearly has a gift for hitting unorthodox beats within genre guidelines. Chantry notices Wallace composing fridge magnet poetry 'love is stupid monkeys in a slapstick hurricane.' The two begin sharing humorous barbs and a walk home, but although she gives him her number, she announces her boyfriend's presence inside her apartment. From the roof of his sister Ellie's (Jemima Rooper, "Kinky Boots") house, where he's lived in the attic since dropping out of med school, Wallace releases the paper into the air. But as luck would have it, the two run into each other, both alone at a "Princess Bride" screening, and a friendship blossoms. Wallace is too noble to make a play for another man's woman, even after Ben heads to Dublin for a six month assignment, but Chantry keeps sending mixed signals. Allan tells him he has three choices, which Wallace interprets as sleazy, conniving or pathetic, but Allan's forgotten that romcom staple, the big romantic gesture. Except in this film, it backfires. The film's loaded with relatable set pieces swaddled in offbeat comedy. What woman hasn't experienced a dressing room try on turned straightjacket? Or well intentioned friends coaxing a Cupid who ends up aiming arrows? Wallace's inadvertent bashing of Ben right out of a second story window is an expertly staged bit of pure slapstick, his later meltdown meeting with Megan in a hospital corridor a clever bit of back story for Chantry's benefit. Even a simple scene of Wallace babysitting nephew Felix (Lucius Hoyos) has an amusing punch line that serves familial closeness. Radcliffe exhibits a clear-eyed sex appeal as the witty and cynical Wallace which Kazan lobs right back. Driver's never been more playful, nicely paired with the spirited Davis. Spall remains appealing in a tough role. Also fine are Rooper, who pulls off the funniest talking-with-your-mouth-full scene put to film. Megan Park ("Charlie Bartlett") rounds out the main cast as Chantry's fizzy sister Dalia, whose attraction to Wallace makes for uncomfortable moments. It's refreshing to see Toronto play itself and the filmmakers take advantage of diverse locations. The film's soundtrack may be too aggressively Zach Braff and Chantry's job as an animator is incorporated too literally to no end, but the film's heart is true. "What If" may go exactly where we expect it to, but the getting there is a pleasurable journey.

Adapted from the play, “Toothpaste and Cigars” (by T.J. Dawe and Michael Rinaldi), director Michael Dowse and scripter Elan Mastal tell the sweet story of Wallace and Chantry, two people who meet in the right place but at the wrong time. Wallace’s acceptance of Chantry’s live-in boyfriend, especially after Ben threatens that they better be just friends, leads to their platonic relationship, though something smolders within Wallace. The story is a clichéd romance where you know exactly how it is going to end (Fool’s Gold). It is the strength of the actors, on all levels, that makes “What If” worth the watch. This is Daniel Radcliffe’s first foray into romantic comedy and, as the shy, introspective Wallace, does it well enough. There is tentativeness to his character that is sometimes endearing and sometimes irritating. Zoe Kazan showed her acting chops as the title character in the otherwise mediocre “Ruby Sparks,” and continues to display her ability for both drama and comedy, not an easy thing. Complimenting the stars are the talents of a fine and funny supporting cast. Adam Driver, as Wallace’s best pal Allan, steals every scene he is in, especially when he advises his friend on the question of love. His love interest, Nicole (Mackenzie Davis), is his match in bawdiness and spontaneity – they get engaged and married in the same hour. Megan Park is funny as Chantry’s sister Dalia and Rafe Spall does a credible job as boyfriend Ben. It is nice to see a film that is shot on location and is NOT trying to be a stand in for New York City. Director Dowse and company use Toronto in its full glory – it is a beautiful and vibrant city and those qualities come through. Dublin, where Ben is assigned as a lawyer for the UN, is also shown with a clarity that gives the city an attractive travelogue quality. Production, overall, is first rate and rounds out the package. It may be another clichéd romantic comedy but, here, the whole is greater than the sum of its parts.