What Happened Was… on blu-ray 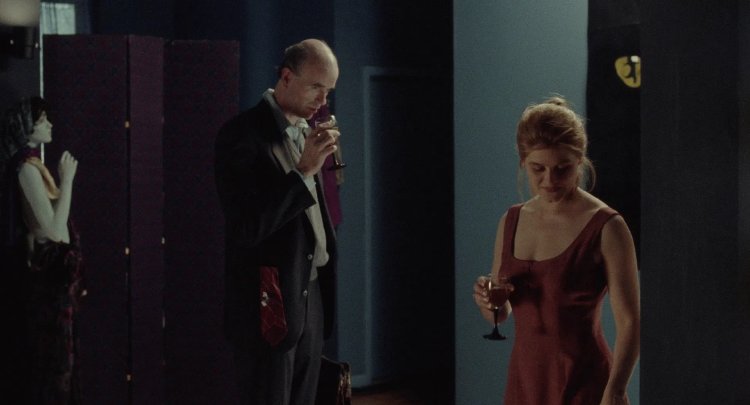 Jackie Marsh (Karen Sillas) has invited a coworker she’s had her eye on for 5 years at their law firm over for dinner for the first time.  After fussing about her slate blue NYC studio apartment and settling on an orange dress, she downs a glass of white wine just as her buzzer rings.  Michael (Noonan) steps in wearing a suit and carrying a briefcase making awkward small talk when he’s not mansplaining such things as microwaving or being overly solicitous.  Jackie repeats herself a lot and makes blunt pronouncements which cut Michael’s pretensions off at the knees.  Eventually the conversation begins to flow more naturally along with the wine but the tone of the evening will take a sharp turn when Jackie reads Michael her children’s story, “What Happened Was…”

Oscilloscope’s 4K scan of an original 35mm print issued on blu-ray, the first time this 1994 Sundance winner (Grand Jury and Waldo Salt Screenwriting awards) has been made available in a DVD format, is cause for celebration.  This compassionate yet unsettling-to-the-point-of-disturbing tale of attempted human connection is a superb two-hander featuring a deft and continually surprising screenplay, two great performances, inventive cinematography and psychologically evolving production design (a forerunner of sorts to 2020’s “The Father” in that regard).  Those who remember the film from its original release will be thrilled with how great it looks and those who’ve never seen it are in for a treat.  Charlie Kaufman fans are sure to note this film’s influence on his work.

Sillas’s Jackie has a decidedly ‘New Yawk’ accent compared to Noonan’s Michael’s more patrician speech and she appears less comfortable in her own skin, yet by the end of the film we will learn it is Michael who has been less honest about who he is, attempting to impress with a façade Jackie has already bought into (‘I thought you were one of the partners’).  Yet Jackie is also more secure in her sexuality, at least after a few glasses of wine.  When she literally lets her hair down and stretches out seductively on her couch her sexual signals send Michael into a defensive panic.  A power shift has begun, one in which Michael, who’s talked about the book he’s been writing for 15 years learns his date has been published, setting up the film’s rawest scene, Jackie’s reading of her ‘children’s’ story that would only be classified as such by a psychologist treating an abuse survivor.

Joe DeSalvo’s (“Johnny Suede”) camera, which has been artfully tracking these two, often using slow zooms towards Jackie, now favors dramatic lighting and extreme close-ups, sweat building up on Michael’s lip as he listens.  Working with costume designer Kathryn Nixon, production designer Dan Ouellette (“Simple Men”) slowly shifts the film’s color emphasis, reds taking over from evening blues (the set was actually repainted and Jackie’s dress color changed and the two colors comingle in the film’s last shot).  Jackie’s walls are predominantly decorated with an MLK and ‘Cats’ poster, the latter becoming more ominous in later goings (earlier Jackie has taken a ceramic cat she broke and dumped the pieces in her fish tank).  Sound and music, too, play a part from Jackie’s early playing of Til Tuesday’s ‘Voices Carry’ (‘hush, hush, even downtown voices carry…’) to the muffled street sounds wafting into the fishbowl-like apartment.  ‘I need to see the city and the people,’ Jackie will say more than once, the woman clearly a loner in a vast metropolis.

Adapting his off Broadway play, writer/director/composer/editor/star Tom Noonan delivered his magnum opus right out of the gate.  The notable character actor ("Manhunter's" Frances Dollarhyde, Kaufman’s “Anomalisa”) only made a few, lesser known films after this one and expresses regret for this on the blu-ray’s 2021 Zoom interview with the film’s producer (we’re informed Noonan’s written a sequel to this film, “What Happened Next…”).  A lot of anecdotes are shared, like the time an audience member got onto their stage, sat on the couch and smoked a cigarette, a situation Sillas handled with aplomb.  There is also a shorter 2021 interview with the actress in which she notes the timing of the blu-ray’s release and the film’s parallels to pandemic life.  The blu-ray also includes the film’s trailer and an essay by Sheila O’Malley inside the cover sleeve.

Noonan ends this awkward and painful experience with something like hope and directs his two-handler with artistry far beyond its stage origins.  “What Happened Was…” is one of the most memorable independent films of the 1990’s.