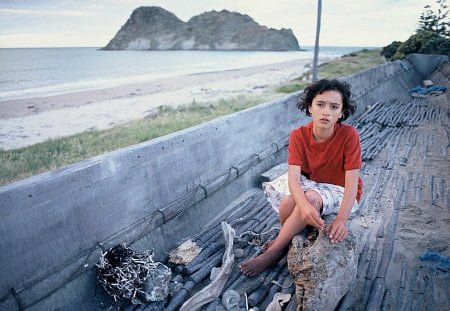 When Pai (Keisha Castle-Hughes) was born, her grandfather, a Whangara chief, waited anxiously for a boy who could become the new leader for his people, but Pai's twin brother and mother died during childbirth. Pai has a deep connection with her ancestral heritage but Koro (Rawiri Paratene, "Rapa Nui") rejects her from his Whangara school because she's a girl who could never think to follow in the footsteps of her namesake, Paikea, the "Whale Rider."

This New Zealand/German coproduction has scooped up the audience awards at film festivals from Toronto to Seattle. Niki Caro has created an antidote to the hopelessness of "Once Were Warriors" with this forward looking tale of hope and pride of ancestry. Think of "Whale Rider" as "Once Again Warriors." In voiceover narration, Pai let's us know that things will turn out alright in the end when she intones 'Koro wished that I had never been born. But he changed his mind.' Koro obviously has deep affection for his granddaughter, who he bicycles to and from school each day, but he is a stubborn traditionalist. He has already driven away his eldest son, Pai's father Porourangi (Cliff Curtis, "Collateral Damage"), who has become an ethnic artist in Europe rather than transforming into the mythic prophet his father hoped to find in him. Koro takes pride in Pai's practice of Whangara rites during school concerts, but when she takes a place in the front row of his 'chief' school and refuses to move to the back, Koro banishes her. As Koro teaches the local, giggling boys the warrior ways with a fighting stick (calling to mind Pat Morita in "The Karate Kid"), Pai peeks in through the window and follows along. Grandmother Nanny Flowers (Vicky Haughton) sees a light in Pai that her husband is blind to and offhandedly mentions that her second son, Pai's Uncle Rawiri (Grant Roa) was a champion fighter and Pai's interest in learning renews Rawiri's self-esteem. Soon he's jogging on the beach. Pai's ability to get her people on the right path is demonstrated again when she influences a friend of her grandmother's to quit smoking. The film comes to a head when Pai, devastated by Koro's absence, gives a prize-winning speech about her love of her grandfather through tears. Unbeknownst to Pai, Koro was waylaid by the anguishing sight of whales beaching themselves. "Whale Rider's" effectiveness is mostly due to the fact that writer/director Caro keeps it from being a feminist screed and instead makes it a story about the young teaching the old. The fact that there's never any doubt as to where the story is heading does make getting there a bit sluggish at times, but the characters are all richly drawn and the New Zealand locations striking. Caro very simplistically injects an air of mysticism into the story by cutting between Pai's chanting and horizon seeking with underwater shots of whales hovering beneath the surface of the sea, as if responding to her calls. The score, by Lisa Gerrard, occasionally references the music of whale calls.