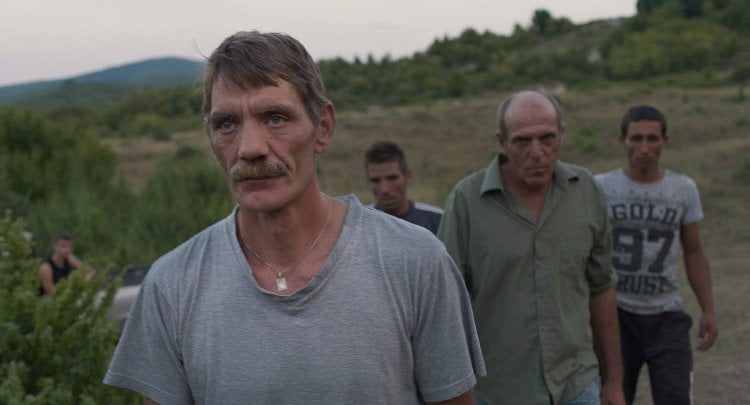 Two German construction workers, Meinhard (Meinhard Neumann) and Vincent (Reinhardt Wetrek), are part of the contracting team sent to Bulgaria to build a hydroelectric plant. But, the foreigners must face suspicion from the locals and bigotry among themselves before the inevitable showdown in “Western.”

When a group of German construction workers set up camp in a remote Bulgarian hillside, their newest member, former Legionnaire Meinhard (Meinhard Neumann), forgoes the company of his coworkers to make friends with the locals, not all of whom appreciate his gestures. Land, water and material disputes increase the simmering tensions between the Bulgarians and the men from the country whose occupation seventy years earlier has not been forgotten in "Western." Writer/director Valeska Grisebach explores male group dynamics, aggression, class resentments and xenophobia in modern day Eastern Europe utilizing oater genre tropes and a non-professional cast. She's achieved a naturalistic slow burn and a hugely sympathetic performance from her lead, Meinhard Neumann. Although the German crew is working to build a water plant that will alleviate the nearest village's water sharing issues, boss Vincent's (Reinhardt Wetrek) overly aggressive posturing sparks suspicion from the get-go. When locals complain that they are working on someone's land, a knife is pulled. Vincent raises a German flag at their camp, which waves over the village. When three women come to swim across from the relaxing workers, Vincent pushes the head of Vyara (Vyara Borisova) beneath the water. Meanwhile, Meinhard, who has located the switch which controls the current water supply, is staunchly against Vincent's demand that they simply redirect it for their own needs. He also finds a beautiful white horse, mounts it, and rides bareback into the village. There he's approached by Vanko (Kevin Bashev), whose objections that the horse belongs to his uncle are not understood (it helps if the viewer can differentiate between the Bulgarian and German being spoken here, all subtitled in English with no differentiation, as few characters understand both languages). But Meinhard befriends that uncle, Adrian (Syuleyman Alilov Lefitov), and soon Vanko is teaching him how to use a rope rein, Meinhard caring for Tornado at the Germans' base camp. Most villagers grow used to his presence among them. Vyara is identified as a translator, and terms are negotiated for completing the Germans' project as she continues to evade Vincent's advances. That white horse is but one symbolic nod to the Western, the man who rides it the 'good guy.' There is also a 'saloon,' where a successful poker hand will come back to bite Meinhard. Grisebach's locations feature mountains, dusty trails and a treacherous path. There is farming among the villagers, Meinhard watching as Veneta (Veneta Frangova) threads tobacco leaves to dry. Vyara is the 'damsel in distress,' who later enjoys a tryst with the 'hero.' Meinhard is frequently asked whether he killed anyone during his tours in Afghanistan and Africa, but refuses to answer, instead decrying violence. Yet he later wields Adrian's rifle at a man who threatens his friend. As "Western" ambles along, we're given countless opportunities to observe a wide range of male behavior. Grisebach doesn't offer a firm conclusion, but gives her audience plenty to chew on. Grade:

A western based in modern day Bulgaria? That is just what writer/director Valeska Grisebach creates with her strong, quiet stranger from Germany, Meinhard, coming into town. Unlike his compatriots at the construction camp, he is curious about the townsfolk and the only one who tries to get past the language and culture barriers. Meinhard is like the nice guy in an outlaw gang trying to take over a town. The stranger coming to town has been a staple of the American western genre, probably since the beginning of celluloid. It is refreshing to see a film, from a distant foreign land and with a femme director, which captures the essence of one of our favorite film genres. There are good guys and (sort of) bad guys, locals and outsiders and conflict between them, but the story is more about a man, Meinhard, who left his country for work but, instead, found a home.