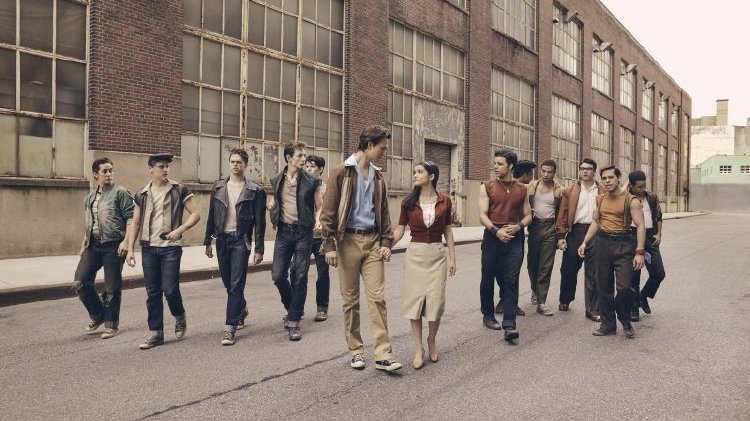 In 1957, the area west of Broadway in New York City is under the wrecking ball to make way for a gentrified Lincoln Center.  Two groups of disadvantaged kids, the Jets, sons of Irish and Italian immigrants, and the Sharks, Puerto Ricans, fight viciously over territory being taken away from all of them.  When Tony ("Baby Driver's" Ansel Elgort), the best friend of Jets leader Riff (Mike Faist, "Wilding"), spies María (newcomer Rachel Zegler), the sister of Sharks leader Bernardo (David Alvarez, Showtime's 'American Rust'), at a dance intended to bring the groups together, their instant spark inflames both groups in “West Side Story.”

When news broke that director Steven Spielberg was going to remake “West Side Story,” the inevitable question arose about the rationale of revisiting a stone cold classic.  How could it possibly be improved upon?  Well it hasn’t, but that doesn’t mean it can’t stand alongside it, the original updated by writer Tony Kushner (Broadway's 'Angels in America,' “Lincoln”) from a modern perspective, Spielberg casting Latino actors and setting the whole in the streets rather than a soundstage, choreographer Justin Peck opening up the dance sequences while staying true to Jerome Robbins’ spirit.  The new cast features several standout, breakout roles including Ariana DeBose’s (“The Prom”) dynamic Anita, Zegler’s sweet voiced Maria and Faist’s sinuous, slit-eyed yet sympathetic hoodlum.  And of course, the original’s Oscar winning Anita, Rita Moreno, not only executive produces but stars as Valentina, the widow of the Doc the druggist character.  The film has both the feel of old Hollywood and a new vibrancy and at times it is downright thrilling.  There’s really only one issue with the film and I’ll get to that later.

In this new version, Lieutenant Schrank (Corey Stoll) informs the Jets, who’ve just defaced a Puerto Rican flag mural with paint, that they’re the last of the ‘no-can-do-Caucasians.’  Tony has just gotten out of prison for a brutal assault and is determined to keep clean even as Riff keeps trying to pull him back into gang life.  Tony has a guardian angel in Valentina, who’s allowed the kid to bunk in her drugstore basement when he’s not sweeping floors.  Maria appears to have just arrived as her English is still dicey (when Spanish is spoken, there are no subtitles but it really doesn’t matter as it’s always obvious what is going on).  She works as a nighttime cleaner at a department store and lives with her brother, a boxer more in love with PR than the U.S., and her brother’s rent paying girlfriend Anita who is convinced of her new country’s opportunities (which leads into the highly spirited ‘America’ while reverberating themes of “In the Heights”).  The Romeo and Juliet inspired origins come into full play, as in the original, with a fire escape duet, here made more visually interesting with a locked grate that separates the two lovers.  Other innovations include the performance of ‘Gee, Officer Krupke’ in his absence and the darting camera of cinematographer Janusz Kaminski which enlivens the performances.  Kaminski’s desaturated colors evoke urban life, yet the predominant blues (Jets) and reds (Sharks) continually suggest the American flag.  Yellow is added to the stained glass windows of the Cloisters, where Tony and Maria exchange vows in a prism of color.

It is in the film’s last act where new ideas are most lacking, Tony’s murderous act true to Shakespeare but not to his newly defined character.  Anita’s attempted rape is much more explicit, Riff’s girlfriend Graziella (Paloma Garcia-Lee, TV's 'Fosse/Verdon') shoved outside, expressing her anguish through the glass of the locked front door.  Anita’s lie about Chino (Josh Andrés Rivera), the young man Bernardo chose to accompany his sister to that fateful dance, turns out to be a prophecy, and while that moment itself is shocking, its aftermath just kind of peters out like a snuffed candle.

Some have found Elgort’s performance lacking, but while he may not set the world on fire, his Tony is just fine, his singing voice surprisingly supple.  The film also stars “Spotlight’s” Brian d'Arcy James as Officer Krupke, but the lesser known players here shine brightest.  Steven Spielberg has long wanted to direct a musical and in a year featuring several noteworthy original ones, it is his remake which is the best.

In 1961, the big screen adaptation of the ‘57 Tony Award-winning musical garnered its bevy of Academy Awards (10) and became an enduring classic. So enduring, in fact, that Steven Spielberg has adapted and brought Shakespeare’s “Romeo and Juliet” tale to movie screens once again in “West Side Story.”

I had the good fortune, a few weeks ago, to have the ’61 original movie playing on TCM as background entertainment. As the film played out and all the wonderful music and song by Leonard Bernstein and Stephen Sondheim presented itself, I found myself drawn to the screen every time one of the many classic tunes and choreographed dances were on display – and there are many. I am not a big musical fan but, to me, that six-decade old movie is one of the best of the genre.

Then, I sat down to watch Spielberg’s faithful remake of the classic music, songs, dance and story. While the two films are the same and adapt “Romeo and Juliet,” they are also very different in significant ways. The earlier film has the look and feel of its root material – very, very Broadway. And, I like that aspect of it – the staginess, the big production numbers, the bright, often garish play of color and light. (And music that I cannot get out of my head, which is a good thing.)

Spielberg, with his very first movie musical, from the start, takes the film in a far grittier and realistic way as the camera swoops in on an “urban renewal” project – read, gentrification – as the old neighborhood is being torn down. Then, we meet the Jets and the Sharks and the renewal is taking the turf they hold dear – but they do not see it. They only see “them” against “us” and the fight for “territory” that no longer exists.

Steven Spielberg, as expected, makes this “West Side Story” his own (with a little help from scripter Tony Kushner) and it stands up, shot for shot, with the original. Comparisons between the two will be many, especially Ansel Elgort and Rachel Zegler as Tony and Maria. Rest assured, both deliver solid, likable performances and both do their own singing and dancing convincingly enough.

Just like the ’61 version, Maria’s friend Anita, played by Ariana DeBose, is a standout, making the feisty best friend character her own – just like Rita Moreno 60 years ago. Mike Faist, as Tony’s best bud and leader of the Jets, Riff, also stands out. The rest of the cast of actors/dancers are first rate and they, too, make the Jets and Sharks their own.

Production is, of course and expected, is up there with the best – from Janusz Kaminski’s crisp photography, especially for the many dance numbers, to set and production design, makeup and costume. Smartly, the filmmakers did not mess with Bernstein’s score and music and Sondheim’s memorable lyrics or the brilliant choreography. It is a full and lovingly executed homage that just so happens to be entirely its own.