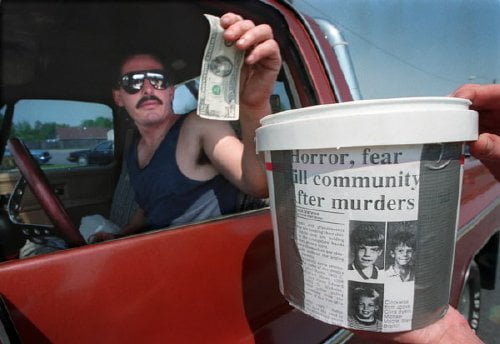 In August of 2011, supporters of the West Memphis Three were shocked when suddenly and without much warning, the State of Arkansas released Damien Echols, Jason Baldwin and Jessie Misskelley. They'd agreed to the Alford Plea, a rarely used legal gambit which required the convicted to plead guilty to the crime of the murder of three young boys over eighteen years earlier while allowing them to maintain their innocence. While this was not justice, many believed Arkansas was trying to avoid losing a lot of money, not to mention face, should the new trial ordered by the State's Supreme Court overturn the original convictions. Since 2006, filmmakers Peter Jackson and Fran Walsh had been bankrolling a new investigation into the case which had unleashed damning DNA evidence, recanting of earlier testimony, harsh reevaluations of prior 'expert' testimony and shocking new revelations. They brought in writer/director Amy Berg ("Deliver Us from Evil") to document what was going down "West of Memphis."

Here is a critical conundrum - how to review "West of Memphis?" Head says it should be judged as a standalone work just like any other film. But the West Memphis 3 case wouldn't have been but a momentary blip on the radar had it not been for Joe Berlinger and Bruce Sinofsky's "Paradise Lost" trilogy for HBO (see a review of the original film here). As much as I've supported this cause over the years, as much as I admire the attitudes of the young men who endured prison for 18 years and as much as I appreciate what Jackson and Walsh enabled, I can't help but be a bit cynical about this documentary. It's a beautifully done piece of work in its own right, yet viewed beside the trilogy which preceded it, it comes across a bit like "Paradise Lost 3b - the Celebrity Edition." What does this offer that the "Paradise Lost" series does not? - a more detailed investigation into how Peter Jackson and Fran Walsh spent a lot of money reinvestigating the case (the results presented by their experts were included in the prior release), a focus on other celebrity supporters and Damien and Lorri Davis's love story. And if you're to believe the press notes, 'the untold story behind an extraordinary and desperate fight to bring the truth to light.' Amy Berg's film looks slicker than the Berlinger/Sinofsky trilogy, but the former is operating with more of a historical perspective and more interviews whereas the latter were there as things unfolded, mostly catching things on the fly. Watch the two films back to back and you will see an awful lot of similarity, an awful lot of shared footage. The most startling addition here is Berg's establishment of a knife used as evidence as having been introduced with blatant lies and some very recent testimony from friends of new suspect (and stepfather to Stevie Branch, one of the victims) Terry Hobb's nephew. Berg digs in for a little more detail - if "Paradise Lost 3" reclassified knife cuts as post-death animal mutilation, "West of Memphis" throws a hog carcass into a tank full of snapping turtles. Berg also includes the final words of court Judge David Lazer, who accepted the Alford pleas, a moment of grace where there have been few. And then there are those nagging questions about how the Jackson/Walsh/Echols/Davis produced film took contractual control of Pam Hobbs, blocking the guys who Echols admitted were responsible for bringing his case to light from using her in their latest update (here is an inteview with filmmaker Joe Berlinger on this subject). "West of Memphis" may end with a title card thanking the little guys for making the difference, but it's "Paradise Lost 3" that shines a light on the ww3.org website founders and support activists, the guys who sourced donations and released court documents. They're not even mentioned in the new documentary - but Johnny Depp, Eddie Vedder, Henry Rollins, Natalie Maines and Patti Smith sure are. The head acknowledges "West of Memphis" as a great piece of work in its own right (albeit one which uses Sinofsky and Berlinger's footage) and recognizes Echols' right to control his own story, but the heart remains with the filmmakers who walked into one situation, found themselves in another, and decided to pick up the cause.