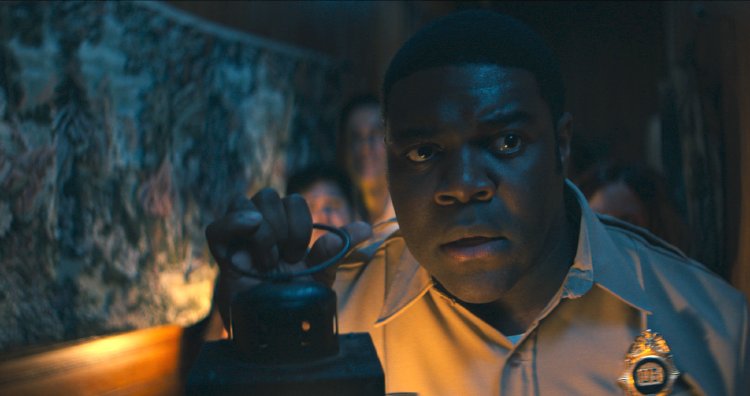 29.5 days after we’ve witnessed a man being dragged by something unseen into the woods encircling the Beaverfield Inn, the town’s new ranger, Finn Wheeler (Sam Richardson, TV’s ‘Veep’), checks in.  He’s introduced to Beaverfield’s resident weirdos, all at odds over Sam Parker’s (Wayne Duvall, “The Hunt”) Midlands gas pipeline project, by mailperson Cecily Moore (Milana Vayntrub) and just as a snowstorm arrives to isolate them all it becomes clear that there are “Werewolves Within.”

This horror comedy adapted from the videogame by first time screenwriter Mishna Wolff and directed by “Scare Me’s” Josh Ruben feels a bit like a game, something like ‘Ten Little Indians’ crossed with Clue if the murderer is possibly a lycanthrope.  It’s a fitfully amusing trifle whose cast is allowed to play to the rafters a bit too often and whose culprit is pretty easy to deduce early on, all held together by an engaging performance from Richardson.

We’re introduced to Finn as he drives into town involved with a self help tape.  This is a man who epitomizes the Mr. Roger quote the film opens with, open to everyone, friendly and helpful.  He’s no sooner checked in with innkeeper Jeanine Sherman (Catherine Curtin, TV’s ‘Stranger Things’) than he’s given his first case in the form of a complaint letter from inn resident Dr. Judy Ellis (Rebecca Henderson, TV’s ‘Russian Doll’) regarding the illicit hunting practices of Emerson Flint (Glenn Fleshler, “Joker”).  Cecily, who delivered the letter, offers to accompany Finn to Flint’s house and he meets other townies along the way.

There are Devon (Cheyenne Jackson, TV’s ‘American Horror Story’) and Joachim Wolfson (Harvey Guillen, TV’s ‘What We Do in the Shadows’), a gay couple transplanted from the city who run a yoga studio; conservative small yappy dog owner Trish Anderton (Michaela Watkins, TV’s ‘The Unicorn’) and her husband Pete (Michael Chernus, “Spider-Man: Homecoming”) and blue collar auto mechanic Gwen (Sarah Burns) and her husband Marcus (George Basil, TV’s ‘Crashing’).  Finn is oblivious to the fact that Cecily has tricked him into delivering a package to Flint who gives the ranger who’s missed all his trespassing signs a hostile, armed greeting.

But at least Flint got his package because Gwen’s still waiting for a part to be delivered to fix the town’s snow removal equipment.   With threatening weather on the horizon, things escalate quickly, Finn discovering the corpse of Jeanine’s missing husband beneath the inn’s porch and Trish reeling in Chachi’s leash from outside his doggie door to find no pooch attached.  A blackout causes everyone to gather at the inn where Dr. Ellis analyzes hairs found on victim and dog leash as belonging to a lycanthrope and deduces it is one of them.  Then all sorts of skeletons come tumbling out of closets…

Ruben found a terrific setting, shooting in a working inn on the off season.  But while the setting is natural, most cast members are cartoons, Anderson and his unlikely love interest Vayntrub excepted.  That’s to be expected in this type of film, but much of the humor feels forced, at least until a pre-climax Rube-Goldbergesque series of catastrophes wipes out half the cast.  “Werewolves Within” offers a few laughs and nothing like a real scare, but it sure proves Sam Richardson can anchor a film and that nice guys don’t always finish last.

Finn (Sam Richardson) is the newly-arrived US Parks Ranger at the tiny town of Beaverfield. But, the place is steeped in conflict over the proposed, controversial oil pipeline through the town. And, there is a great danger lurking. A danger that may be caused by the “Werewolves Within.”

The only thing I knew about this horror comedy by actor-turned-director Josh Ruben, with a script by Mishna Wolff, is that it is adapted from the same-named video game. So, I went into this like an innocent new-born babe. What I got is a cutely funny horror spoof that had a few laughs.

The classic story of Ten Little Indians crossed with John Carpenter’s “The Thing (1982)” plays prominent in this werewolf saga about the “government official,” in the guise of uber-nice guy Ranger Finn, and his arrival in town. His first meet of the townsfolk is with Cecily (Milana Vayntrub), the local National Mail Express Service (read USPS) person, who warns Finn that everyone in town is “questionable.”

“Questionable” turns out to be a collection of quirky individuals residing in Beaverfield, all of whom are suspects in despicable murders. Then, the word “lycanthrope” comes into play and, with the disputed oil pipeline added to the mix, things boil down to a routine whodunit. There is also a character, Emerson Flint (Glenn Fleshler), that bears an awfully strong resemblance to Quinn from “Jaws.”

The intent of the “Werewolves Within” is to keep you guessing with the plethora of oddball characters, any of whom could be the titular mythical creature. I figured it early on but had some fun watching how the filmmakers tie up all the loose ends of their spoof.