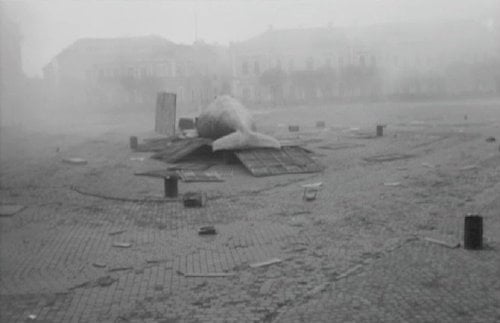 In a shabby bar in a small Hungarian town, János Valuska (Lars Rudolph, "The Princess and the Warrior") arranges three drunks as the sun, the earth and the moon to demonstrate a solar eclipse. The villagers are fearful of the arrival of a circus traveling with 'the world's largest giant whale' and an appearance of The Prince while György Eszter (Peter Fitz) posits that the work of a 17th century music theorist's principles must be undone to restore musical order in "Werckmeister Harmonies."

Director Béla Tarr's (with a codirecting credit for his editor, editor Ágnes Hranitzky) third collaboration with his writer friend László Krasznahorkai (adapted from his novel "The Melancholy of Resistance") springs from the same place as his first, "Damnation," (they share the same bar and bartender, Gyula Pauer) but where that film looked at love and betrayal under Communism, this one addresses such issues as Church and State, order and chaos and the apocalypse itself. The film's share one man's point of view and the long, slow takes which became Tarr's signature, but, for Tarr at least, "Damnation" has a fairly straightforward narrative whereas "Werckmeister" is symbolic and fantastical. (Tarr's infamous 7 and a half hour epic, "Satantango,' falls in between the two). There are only 39 shots in this two and a half hour film, but unlike "Damnation," where Tarr used a series of slow horizontal tracking shots and space to 'edit' his scenes, the 6 credited cinematographers here follow János as he makes his way around town. He heads to the newspaper office to pick up his deliveries and begins to hear rumors about the circus - a town's broken Church clock restarted when the Prince appeared, a poplar fell - yet he is excited to see the whale and first to buy a ticket when the exhibit opens. The whale arrives under cover of night, driven in by a truck bearing a huge container (along that same wall where Tarr tracked tableaux of human misery in "Damnation?") which is left in market square. There are crowds gathered in the fog, but we only see János enter the exhibit, marveling at God's whimsy to create such a wonderful creature - indeed the dead eye of the whale could be the eye of God. But man has indeed begun to act strangely. Tünde Eszter (Hanna Schygulla, "The Marriage of Maria Braun") brings a suitcase to János and tells him that she and the Police Chief wish to form a committee to clean up the town and restore order. They need funding, and if her husband, who asked her to move out years ago, doesn't obtain the signatures she requests by 4 p.m., she says she will join him for dinner 'this very night.' János convinces György to do as she asks (after György unleashes a string of epithets calling her a slattern and a slut), but cannot convince him to see the whale and the two part at a fork in the road. Reporting to Tünde, János finds her in a robe with the Chief Constable (Péter Dobai) drunk in her bedroom. He's asked to put the policeman's children to bed, then go to the town square and report back, but the children are in a state of noisy rebellion, the eldest repeatedly screaming 'I will make it hard on you!,' and the bonfires in the square lead to rioting, beatings and murder. The Prince, who at one point is seen in shadow spouting his philosophies, may bring chaos, but it is difficult not to be moved by the whale carcass, just as later, a naked old man discovered standing in a hospital bath finally quells the rioting - both symbols of man facing his mortality. The long march of villagers at the start of the riot are photographed from a low angle, but the same men who shuffle from the riot are captured in an overhead shot - that eye of God again (and also impossible not to see also as the quelling of an uprising by the Communists). Tarr wrests emotions in the most unexpected places - when János finds the body of the town's humble bootmaker, whom we have barely met in two scenes, we nonetheless feel grief. Original Music by Tarr's composer Mihály Vig is beautiful and melancholy (and much, if not the same, as that in "Damnation"). "Werckmeister Harmonies" is a dream of a nightmare where we are guided by a holy fool. János may take directives from others, but he is the only man with clear vision.