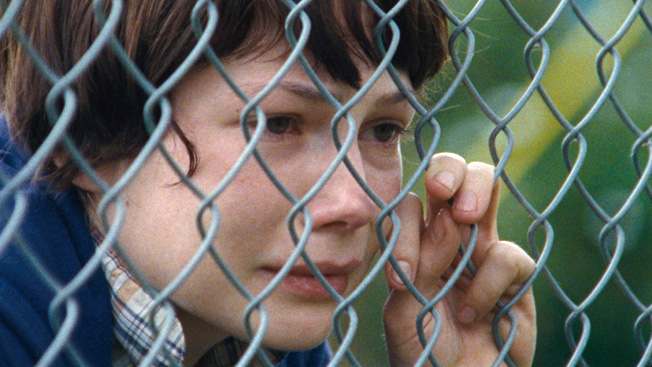 A young woman traveling through a small Oregon town with her sausage shaped golden mutt finds the dog with some intimidating folk at a campfire. Icky (Will Oldham, "Old Joy") verifies her cause for concern, but also gives her a lead for a good paying job in Alaska, the state she hopes to restart her life in. But with her cash dwindling and her car unable to start, things may be turning down a bad road for "Wendy and Lucy."

Wendy (Michelle Williams) is Alaska bound with hopes of finding a job and changing her less than rosy life. Her daunting journey, though, is easier because of her beloved mutt, Lucy. When her car breaks down in a small Oregon town, she has no money to repair the vehicle. She and her best friend head off, on foot, to the grocers to get dog food. But, without much money, Wendy turns to shoplifting ­ and is caught. This small mistake in judgment will have a huge impact on “Wendy & Lucy.” Sophomore filmmaker Kelly Reichardt made her feature debut with the quirky, oddly appealing “Old Joy.” It was an interesting exercise and Reichardt learned a lot about telling a visual story. The result is the quiet, hypnotic “Wendy & Lucy,” a film both low-key and heart-rending. The tempo of the film is a languid day-in-the-life story that focuses on Wendy and the sad turn her once hoped-for life takes when her Lucy goes missing. Michelle Williams (the winner of this year’s Online Film Critics Society Best Actress award) gives a fine, real performance as the unfortunate Wendy. Her affection for her Lucy is palpable and her desperation as she looks for her missing dog believable and empathetic. Williams delivers the goods and deserves the attention this fine role is getting. While the film is a true one-hander, with the focus entirely on Wendy, several notable supporting characters help give “Wendy & Lucy” full dimension. Walter Dalton plays a kindly Walmart-esque security guard who feels for the stranded young woman and helps her in whatever meager way he can. Will Patton is serviceable as the repair shop owner who has the break the bad news to Lucy about her car. Larry Fessenden makes a surreal appearance as a physically intimidating homeless man but one with a harmless gentleness. Techs are gritty with excellent docu-style lensing by Sam Levy. Production values are simple and straightforward, allowing the story and performances by Williams and the rest to keep your attention from start to finish. One would not think that a girl and her dog flick could strike so deeply into your heart.