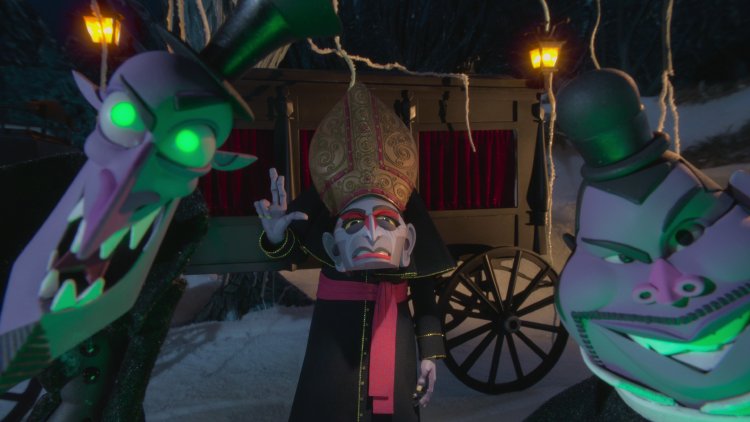 After the trauma of losing both her parents when she distracted her dad while he was driving, the now 13 year-old Kat Elliot (Lyric Ross) is getting a second chance after a troubled adolescence back in her home town at the Rust Bank Catholic School for Girls.  But the school’s principal, Father Level Bests (James Hong), may trade his soul to Irmgard (Maxine Peake) and Lane Klaxon (David Harewood) to keep it running in exchange for Klaxon Korp’s final takeover of the rundown town while the school’s wheelchair-bound school janitor Manberg (Igal Naor), who oddly resembles Marlon Brando, collects demons in the basement with the help of a magical teddy bear.  It’s Bearz-a-bub who informs two demons that the new student is a prime Hellmaiden candidate and once Kat has been so marked, she’ll be the ticket to escaping the underworld for “Wendell & Wild.”

If that opening description sounds a little overstuffed be forewarned that it merely scratches the surface.  It is thrilling to greet the return of cowriter (with Jordan Peele)/director Henry Selick ("The Nightmare Before Christmas"), whose last stop motion animation project was deep sixed by John Lasseter at Pixar, and the artistry on display is everything one would expect but the story is so over-populated with characters and subplots it fails to reach his usual heights.  Still, his black heroine with green hair, knee high combat boots and dad’s Afro-Punk mixtape blaring from his vintage boombox with a bloodshot eyeball for a speaker is a startlingly original creation who keeps us invested in her loony journey.

While Kat susses out her new school, suspicious of ‘welcoming committee’ Siobhan (Tamara Smart), Sweetie (Ramona Young) and Sloane (Seema Virdi) while gravitating towards shy trans student Raúl (Sam Zelaya), Selick introduces us to his titular characters (voiced by comedy due Key and Peele) toiling away for Lord of the Underworld and Ruler of the Scream Faire Buffalo Belzer (Ving Rhames).  They’re tasked with driving a cart across Belzer’s giant head applying hair cream to his hair plugs.  Wendell is annoyed by Wild’s habit of eating the cream for the ‘tickle in his tummy,’ but they make a startling discovery when their pet tick is squashed and the cream revives him.  Being able to revive the dead gives them the perfect ploy to get their Hellmaiden to help them escape the Underworld and bring their Dream Faire, the counterpart to their boss’s hellish amusement ‘park,’ to fruition.

Along with Kat’s soon-to-be-brought-back-from-the-dead parents Wilma (Gabrielle Dennis) and Delroy Elliot (Gary Gatewood), Kat also has an ally in Sister Helley (Angela Bassett), the cool teacher who brings things like a mimic octopus into class and is secretly a Hellmaiden herself while Raúl’s mom Marianna Cocolotl (Natalie Martinez) tries to keep the city council from approving the Klaxon plan for a private prison.

Yeah, the plot gets crazy (and I didn’t even mention the yoga goat) but sit back and enjoy the glorious, hand-crafted visuals that delight with such details as a carriage wheel breaking the ice on a puddle or the ancient radiator that dances in Kat’s room.  You can see “A Nightmare Before Christmas’s” design aesthetic screaming through in purpler hues.  The film also features an outstanding soundtrack featuring the likes of Polystyrene’s X-ray Spex, TV on the Radio and Living Colour.  Be sure to stick around through the end credits, which feature scenes of the artists painstakingly filming their models and Kat venturing into the real world.