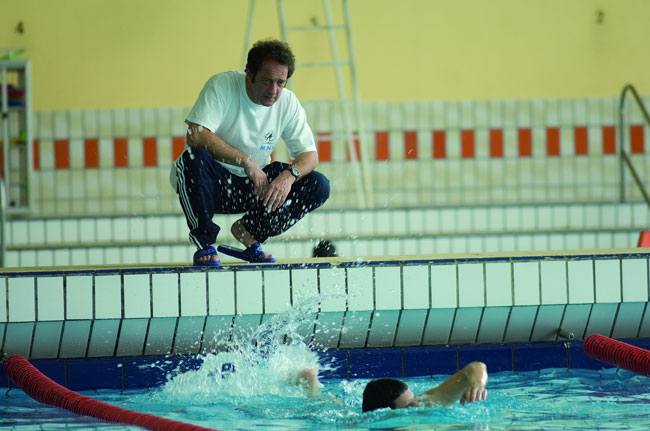 Balil (Firat Ayverdi), a Kurdish teenager, spent three months making the arduous and deadly trek from his native land to the French coastal city of Calais. He plans to cross the English Channel to be with his girlfriend living in London with her family but Franco authorities put the kibosh on this and will not let him leave the country. The young man has to come up with a new plot and he approaches Simon (Vincent Lindon), a middle-aged swim instructor, to teach him to swim so he can cross the Channel and be with his beloved in “Welcome.”

Calais swimming instructor Simon (Vincent Lindon, "Vendredi Soir," "La moustache") doesn't pay much heed to the problems of illegal Iraqi immigrants who've made their way to his English Channel home, but when he runs into his soon-to-be-ex-wife Marion (Audrey Dana) at the grocery store, she protests when Iraqis are banned from the store. Simon takes a fresh look at his latest pupil, Bilal (Firat Ayverdi), and resolves to help the young boy who is determined to reunite with his true love Mina (Derya Ayverdi) in London by swimming the English Channel in "Welcome." Director Philippe Loiret, who cowrote his latest with his "Don't Worry, I'm Fine" writer Olivier Adam and supporting player Emmanuel Courcol, offers the 'white man's perspective' on the Middle Eastern immigrant saga seen from the Afghan POV in Michael Winterbottom's "In This World," and that's fine because not only would the films make a wonderful double bill, Winterbottom's filling in Balil's back story, but because Loiret takes the opportunity to criticize - severely - his own country's laws regarding illegals. The story follows mostly standard paths for this type of film, but it also takes a couple of unexpected turns. Lindon gives a fine character portrait of a man adrift after his wife's departure who comes back to life looking outside of his own skin. Approximately the first half hour of the film follows Bilal as he heads to an Afghan kitchen and finds old friend Zoran (Selim Akgül) in line. Zoran tells Bilal that several of the methods he thought he could use to get to England will not work and that they must come up with 500 Euros to be brought over by a 'handler.' Bilal helps Zoran with his fare, but when the two and several other men are herded onto a truck, Bilal has serious problems staying quiet under a tarp and eventually blows their cover at the border. Now Bilal is not only back where he started, but has made several enemies. Bilal signs up with Simon for swimming lessons and gets into more hot water when a crowd of Iraqis follow him hoping to use the facility's showers. But after the incident at the market, Simon looks more closely at Bilal and begins to warn him about the incredible risks in swimming the Channel. When Simon sees Bilal and Zoran wandering, homeless one evening, he takes the two boys home, but his kindness lands him in the police station when his neighbor (whose 'Welcome' mat supplies the ironic title) turns him in for harboring an illegal. Soon even Marion is warning Simon that the Kurds will bring him trouble, but she is also regarding him in a new light. Meanwhile, back in London, Mina's father is arranging her marriage to a wealthy restaurateur and Balil's time is running out. Loiret portrays French law towards illegals as police state bullying - he has Marion compare the market incident to Nazism and it is easy to see when Kurds are being tear-gassed and beaten in the streets and citizens are harassed and jailed for lending a helping hand. The film is a wake up call to actually see those we usually ignore and Loiret makes this point forcefully, even among the Iraqis themselves, when we learn just why Balil could not keep quiet. The film's look is dreary, but its climax is suspenseful and powerful, it's ending perhaps not what we are used to. Lindon may be the film's focal character but it will be difficult to forget the passion, resilience and bravery of Bilal.

As a professional swim instructor, “Welcome” had me when I read the synopsis, so I was anticipating it very much. This, though, is a small part of the attraction that makes this a story about perseverance, love, friendship, dedication and the bureaucratic injustice outsiders receive when they try to escape their plights and flights from oppressive foreign lands. Seen through the eyes of both Balil and Simon, these strangers meet when the young immigrant seeks out instruction to train him to swim the English Channel. Simon agrees to train the 17-year old but is stunned when he realizes the boy’s plan. A true friendship grows and, because of Balil, Simon changes his cynical view of the world. Director Phillippe Lioret, with his first class costars, veteran Vincent Lindon and newcomer Firat Ayverdi, builds a beautiful, believable structure that shows cultures clash and friendships made while telling the inspirational, though sad, story of the young man and his dreams. The rest of the supporting cast, especially Audrey Dana as Marion, Simons ex whom he still loves, give full breadth and width to those moving in and out of the lives of the two men. The script, by the helmer Lioret, Olivier Adam and Emmanuel Courco,l is rich with cultural, political and social insight as it looks at a microcosm of life in one of Europe’s busiest crossroads. Techs are solid on all levels, giving “Welcome” verisimilitude with its social strife where outsiders cannot even pay to take a bath – they are refused outright. There is real power to this story and its many threads. One thing I would recommend, though, before you see “Welcome” is to rent Michael Winterbottom’s mock doc “In this World.” That film gives you a real taste of what Balil and others endured – harrowing experiences, many – just to be free. The two films are a perfect set of bookends.