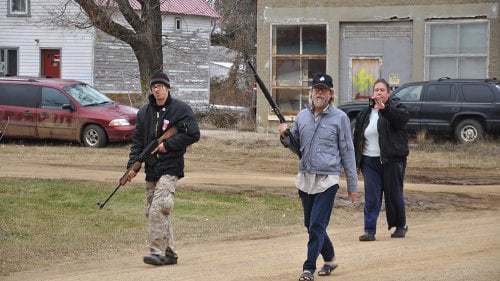 Leith, North Dakota is a sleepy little town in the country’s heartland and its inhabitants are peaceful, friendly and law-abiding. But that all changed in 2012 when white supremacist Craig Cobb moved into town and started buying up parcels of land. His plan: to inhabit the town with others of his racist ilk and take it over legally, with the vote, in “Welcome to Leith.”

Prior to Cobb’s arrival in Leith, the citizens were the kind of people where “everybody has everybody’s back.” That slowly changed as the white supremacist was joined by such notorious neo-Nazis as Tom Metzger, Alex Linder and Jeff Schoep, a prominent leader in the National Socialist Movement. It looked like the town would be overrun by fascist fanatics. The people of Leith did not take the invasion lying down and a grassroots movement, called UnityND, began organizing protests against the invaders. The protesters numbered in the hundreds and the townsfolk turned to the law when Cobb and his cohort Kynan Dutton were charged with terrorizing the citizens with armed patrols, allegedly threatening residents with their loaded rifles. This began a court battle that, by the end of “Welcome to Leith,” is still not resolved with Cobb released from prison on probation. Documentary filmmakers Michael Beach Nichols and Christopher K. Walker utilize interviews with the Leith residents, archival news footage and images of the neo-Nazis as they tried to take over the town. The result, “Welcome to Leith,” is an indictment against the white supremacist movement, racism, bigotry and hate. For most of us, we do not have to think about the encroachment of such hate in our lives. But, others do and the film shows how insidious this “peaceful invasion” is.