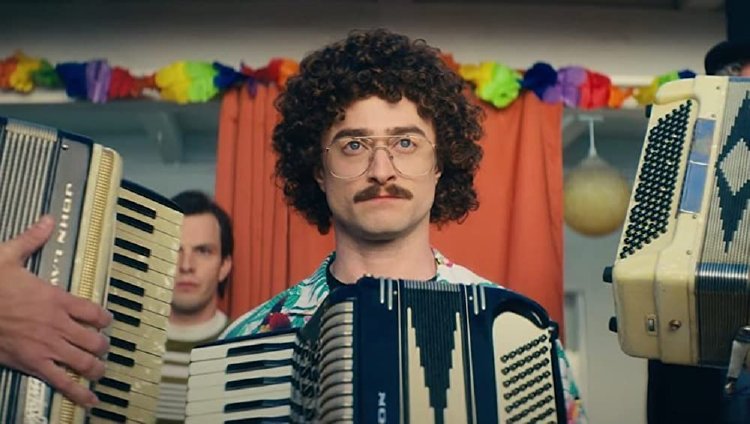 As a bloodied and battered Weird Al (Daniel Radcliffe) is wheeled into surgery by a doctor (Lin-Manuel Miranda), he suddenly sits up to proclaim ‘You don’t know anything!’  For the next ninety-odd minutes, cowriter (with 'Weird Al' Yankovic)/director Eric Appel (TV's 'Son of Zorn,' 'Die Hart') expand their 2010 'Funny or Die' short to tell us “Weird: The Al Yankovic Story.”

Rolling back to Al Yankovic’s childhood (the role will be played by Richard Aaron Anderson, then David Bloom as a teenager), we’ll meet a one-handed dad, Nick (Toby Huss), who works at a factory whose product remains a mystery and where even children have frequently fatal run-ins with an industrial shredder.  When little Al attempts to showcase his career aspirations by singing ‘Amazing Grapes,’ his father goes ballistic and mom Mary (‘Blonde’ mom Julianne Nicholson) advises ‘We agree it would be better for all of us if you would just stop being who you are and doing things you love.’

Serendipitously, a door-to-door accordion salesman (Thomas Lennon) arrives and little Al lights up like a Christmas tree, but dad intervenes and beats the man to a pulp.  Mom buys the instrument on the QT if Al promises to only play it when no one can see him.  Years later, when high school friends convince him to sneak out to a party that turns out to be a polka bash, Al becomes a hero with his fleet fingering, but is thrown out of the house.  Now an adult (Radcliffe) living with three roommates (Jack Lancaster, Spencer Treat Clark and Tommy O'Brien), Al is despondent over failed auditions until he offers to make sandwiches and is told ‘open up a package of my bologna.’  Instant inspiration turns into a recording in a bus station bathroom (chosen for its acoustics) and, after being cautioned that success doesn’t happen overnight, the very next day ‘My Bologna’ is played on the radio.

This (mostly) fictional account of Weird Al’s life is a parody of a ‘Behind the Music’ episode that turns Madonna (Evan Rachel Wood) into a gold-digging girlfriend who leads Al down a boozy path while trying to get a ‘Yankovic bump’ for ‘Like a Virgin,’ beloved mentor Dr. Demento (Rainn Wilson) into a Jacuzzi-crasher who slips him LSD and drug lord Pablo Escobar (Arturo Castro) into a huge fan not above kidnapping for a birthday performance.  The film is jam packed with surprising cameos like Patton Oswalt as a heckler or Quinta Brunson as Oprah.  A poolside party at Dr. Demento’s intended to introduce ‘Weird Al’ is stuffed with everyone from Devo to Pee-Wee Herman (Jorma Taccone) to Andy Warhol (Conan O'Brien) and Salvador Dali (Emo Philips) and it is here where Al earns his chops when a disparaging Wolfman Jack (Jack Black) challenges him to create a parody song on the spot.  Queen bassist John Deacon (David Dastmalchian, "The Suicide Squad"), who nobody seems to know, steps up to suggest ‘Another One Bites the Dust.’

At times the film, with its silly humor and historical characters, has the feel of a “Bill and Ted” adventure, albeit one with the sweetness sucked out.  It eventually runs out of steam, the Madonna character its weakness, but it’s a fun ride while it lasts.  Radcliffe, who has been freed by “Harry Potter” to do whatever he wants, continues his crazy quilt career, performing the hell out of numerous Weird Al hits (although the singing is dubbed by the man himself who also plays record producer Tony Scotti along with Will Forte as his bad cop brother Ben).  ‘Amish Paradise’ becomes a sentimental father/son bonding finale as Coolio (an uncredited LeChristopher Williams) stews in the audience.  Weird Al's original closing credit song, 'Now You Know,' is, unfortunately, not really eligible for an Oscar as its lyrics states, the film not having been released in a theater per Academy rules.  Production values are low budget, befitting the tale, without stinting on atmosphere or fight choreography (!).

Did we know the real Alfred Matthew Yankovic – the guy who made song parodies like “Eat It” and “Like a Surgeon” – or is the man a bundle of enigmas, drug use and excess that he carefully masked over his decades of fame? Find the truth (maybe) as told in “Weird: The Al Yankovic Story.”

There have been films about the life of Weird Al but this one, directed by Eric Appel (his second Weird Al movie), is more along the lines of Quentin Tarantino’s revisionist “Once Upon a Time in…” films. If you know anything about Al Yankovic it is that he is a really nice guy, Al wrote the screenplay for “Weird” and it is a funny reimagining of his own life and career.

We see the “birth” of Weird Al when his buddies challenge him to come up with a parody song. “My Bologna” is his first of the Knack’s 1979 hit “My Sharona” and sent it to the Dr. Demento Radio Show where it, amazingly, gets airplay. History is made and the king of the parodies is launched. This is where the story morphs from a biography to a fantasy version of Al’s life. I have to admit, the fantasy is funny.

First and foremost in this parody is how Al portrays his parents. The real life Al adored his parents and they supported and encouraged him from early on. In “Weird,” his dad (Toby Huss) is mean and discourages his son’s music ambitions. His mom (Julienne Nicholson) simply tells him to “stop being who you are.” Al does not get discouraged.

What follows is the depraved life of a rock star with drugs and women taking over his life, including Madonna (Evan Rachel Wood) who sees Al as her way to the top through his music. As I said, a reimagining.

The most fun thing to do while waching “Weird” is to count the bevy of acting talent playing celebrities that Al may or may not have really met. To name just a few, we get Dr. Demento (Rainn Wilson), Tiny Tim (Demetri Martin), Pee-Wee Herman (Jorma Taccone), Andy Warhol (Conan O’Brien), Salvador Dali (Emo Philips), Divine (Nina West) and Wolfman Jack (Jack Black) are included, but there are many more showing their mugs. Everyone must have lined up to try to get an invite to take part in “Weird.”

Daniel Radcliffe has taken his fame and fortune from the “Harry Potter” days and parlayed it into doing whatever he darn well pleases. And, it is obvious that he enjoyed enveloping himself in the cloak of Weird Al. I have a funny feeling that the actor actually learned how to play the accordion (Al’s signature instrument) to truly inhabit the role.

I realized, as I finished watching the end credits of “Weird” roll by, that I had a smile on my face for the entire movie and had quite a few hearty guffaws, too. In a very strange way, you lea

"Weird: The Al Yankovic Story" is streaming on the Roku Channel.